John Currie Lauder came up to Jesus College in October 1910 having attended the City of London School. 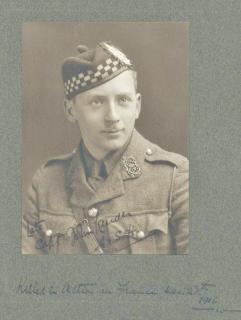 He was the son of Harry Lauder the famous comedian and vaudeville theatre singer.

In the May Term 1912 edition of Chanticlere there is a letter from an anonymous person (B.BIT. R.A.) which complains that the magazine is written for the “amusement and edification (?) of only a few members” (p32).

It appears that Lauder is not one of the few as the only mention of him is as the cox to the third boat in the Lent Races 1911.

However the obituary for him in the Jesus College Society Annual Report, 1917 gives a quite detailed account of him and in particular his musical abilities. The obituary says “he had a fine baritone voice” and that he scored and orchestrated many of his father’s songs.

It also suggests that he had no desire to follow in his father’s footsteps, rather that he had wanted to enter Law as a profession.

Lauder was apparently in Australia when war broke out, he returned almost immediately and joined the Argyle and Sutherland Highlanders.

According to a newspaper report the theatre where his father was performing cancelled both the matinee and evening performances when the news came through. His father was prostrated with grief: “Father and son were passionately devoted to each other and the famous comedian is heartbroken”.

The same newspaper report also says that he was also engaged to Mildred Thomson, daughter of a Scottish farmer.