​John Christopher Coy came up to Jesus College in October 1909 having attended St Paul’s School and then been privately tutored. 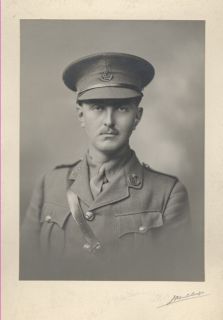 He received his BA in 1912 having taken papers in History in 1911 and Geography in 1912.  He stayed on for an extra year to study modern and medieval languages, taking the special papers A and B in December 1912.  His obituary suggests that he spent his fourth year studying Geography but he took no further exams.

Whilst at College he seems to have taken an interest in rowing only in his second year when he appeared in the second boat at the Lent races. After that he regularly appears in the boat club records, though never in the first boat.  He rowed in the third May boat in his fourth year, which The Chanticlere claims “did not find its form to start with, but then recovered and made three bumps, racing well the last two nights”. (Michaelmas Term 1913, p. 31)

His obituary in the Jesus College Cambridge Society Annual Report 1919 adds little information on him, other than to record that he received his commission to the Durham Light Infantry at the outbreak of the war before being transferred to the Northumberland Fusiliers.  However, it is interesting to note that Coy is recorded as living at Rosemont on Cherry Hinton Road in June 1914 and that the “Durhams” were billeted in College in August and September 1914.  (Annual Report 1915, p. 10)