​John Bedward Royle came up to Cambridge in 1892 having attended Uppingham School and Oxford Military College. 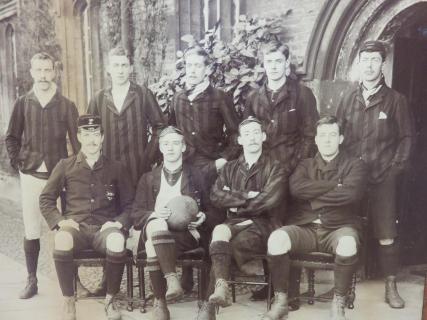 His main recorded contribution to College life was to Rugby. He was a forward who “plays very hard. Good in the loose, come on very much during the season” (Chanticlere, Lent Term, 1893, p73).

Royle was also captain of one the Rugby Nines teams that played in Lent Term 1893. An event which Chanticlere claimed caused “considerable excitement owing to the most of the prominent players in the College taking part”. Royle’s team, “1 goal and 1 try (7 points)” beat Turner’s team, “1 goal (5 points)” (Easter Term, 1893, pp104-5).

The Rugby Nines were played on the Close and in 1894 Chanticlere reports, with regret, that neither the popular “Rugger Nines” or “Socker Sixes” were to be played there that year. “The reason alleged being that the Close has not time to recover from its hard treatment before it is wanted for cricket”.  The report goes on to say that “We cannot help feeling that if our energetic Rugby Secretary of last year were still in residence he would have found means of over-riding this excuse”. Royle was that “energetic secretary” (Lent Term 1894, p51).

The Jesus College Society Annual Report, 1917 obituary for also laments the fact that he was only present for a year and that he was “a keen, thorough gentleman, and a universal favourite.”

The obituary also says that he enlisted with the Imperial Yeomanry (Sherwood Foresters) at the outbreak of the South African War eventually going to be a Captain and Adjutant. He also received the Queen’s and the King’s Medal.  At the outbreak of the First World War, as a reserve officer he was posted to the South Wales Borderers, becoming a major in December 1915  (Jesus College Society Annual Report, 1917, p35).