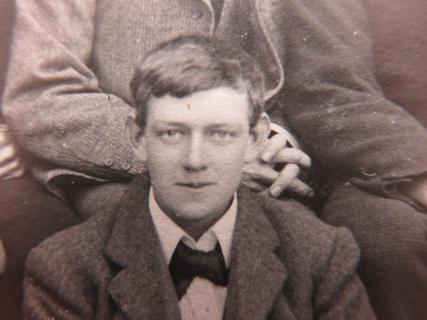 He graduated in 1902 with a 2nd Class (2nd Division) degree in the Classical Tripos. Haldane was a member of the Cambridge University Rifle Volunteer Corps (CURVC); as such in 1900 he became a member of the Volunteer Service Company of the 1st Suffolk Regiment that fought in the Boer War. He was one of 14 Jesuans to do so in 1900.

An extract of a letter from Haldane was published in Chanticlere, Easter Term 1900. At this time he was stationed in “Beaufort – a town of some 4000 people – lies right in the middle of the Karoo desert”.

He reported that the Dutch inhabitants were “very peaceable… though it seems pretty certain that only a hundred or two would not have risen had the Boers made any sort of demonstration in this direction”.

The routine was apparently “not very hard, but enough to keep one fit”. For diversion from the monotony they played a couple of cricket matches, more for the “novelty” than anything else as the game was “played on a brick-baked ground strewn with jagged stones, under a mid-noon sun – and moreover in our only uniform clothes”.

As for actual battle he recorded that although rumours abounded that they might move up to Springfontein or Reit River they were generally pessimistic that any more infantry volunteers would be moved up to join the main regiment. However, he hoped that he would be back by the end of the summer but added the proviso that “the war might drag for months yet.”

The extract ends with news of another Jesuan, Everard Walter Fichardt (1894), who Haldane’s Sergeant Major claimed had passed through the area “as one of our prisoners”. Haldane also mentioned that since they had been there several celebrities had been through: “Lady Roberts, Milner, Gatacre, and Rudyard Kipling” (Chanticlere¸Easter Term 1900, pp322-323).

He arrived home one year later, in May 1901. The CURV contingent were “enthusiastically received as they marched from the station to the University Church. After a short service they were presented with the Freedom of the Borough”. Chanticlere and College were “heartily glad to welcome back Pte. J.O. Haldane, and to congratulate him on the fact that he never had occasion to go into hospital” (Chanticlere, Easter Term 1901, p372).

After graduating he went on to join the Ugandan Civil Service and in 1912 was made District Commissioner of Toro. He resigned at the outbreak of war and returned to England. His death was tragic: "while trying to bind up one of his men, he took off his gas mask in order to see better and died almost immediately”.