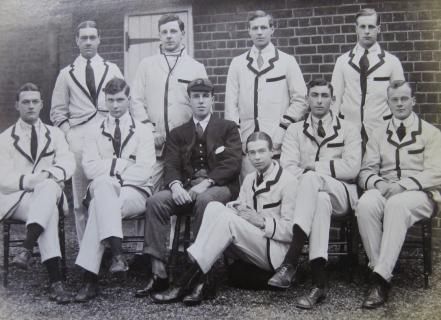 Whilst at the College he took papers in the Dual Mechanical Science Tripos in June 1913, which may explain why he subsequently joined the newly-formed Machine Gun Corps.

He was a member of the Jesus College Boat Club and rowed in the third boat in Lent 1913, May 1913, and the second boat in Lent 1914. We have a picture of the latter but unfortunately the names do not correlate to the order in which the oarsmen are standing. Swears is one of the men on the right half of the image or the man sitting directly to the Coach's right. All of the boats he rowed in performed well, each gaining a bump or two but not much more than that.  Swears rowed at No. 5, No. 3 and No. 7 and over the course of one year gained half a stone.

There is little other personal information about Swears in the archives, he is also one of the few men for whom there is no obituary in the Jesus College Cambridge Society Annual Report. He is commemorated in the University War List, the College War Memorial and in the Jesus College Boat Club Roll of Honour.

The Commonwealth War Graves Commission reveals that at the time of his death he was attached to “D” Battalion of the Tank Corps or Machine Gun Corps (Heavy Branch). His name appears on the Arras Memorial.