Hugh John Sladen Shields came up to Jesus College from Loretto School in 1906. 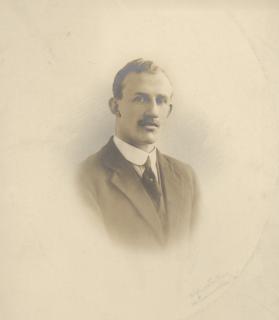 Shields graduated in Natural Sciences with honours in 1910, became a ‘scholar and a prizeman’ at Middlesex Hospital, and finally obtained his M.B. in 1913. He obtained a commission with the RAMC in 1912 and at the outbreak of war in 1914 was attached to the Irish Guards and left for the front at 4am on 12 August 1914.

Shields, nicknamed “Willoughby” from his schooldays, had a high profile whilst at Jesus particularly as he was a keen sportsman. He was also an active member of the religious community in Cambridge, a committee member of the Cambridge Church Society and took an interest in philanthropic work in Cambridge and London.

“I always felt about him at Cambridge that he was absolutely fearless about his religion - not a common thing in that atmosphere; and that the thing he cared most about was the service of his Lord and Master” Revd. E. G. Selwyn, Warden of Radley College.

In his first two years at College he was a member of the first XV at rugby, described as “the cleverest of the forwards” (Chanticlere, Michaelmas Term 1914, p7). However, in 1908 he rowed in the “rugger boat” and from there improved so dramatically that he gained his blue when he stroked for the Light Blues against Oxford in 1910. 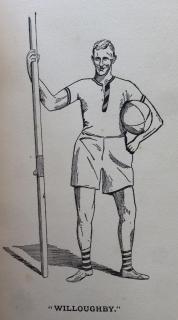 The crew that beat the Belgians

Hugh was also a member of a crew that won one of the most remarkable races in the College’s rowing history. In 1911 a crew, made up entirely of Jesuans, past and present, went to Belgium where they received a rapturous welcome with 100,000 people lining the canal at Terdonck to see the race.

The Belgian crew that they were up against was the more successful; one that had won three out of four races at the Henley Regatta since 1908. But against heavy odds, the Jesus crew triumphed.

The cox, Conrad Skinner wrote “[They are] without question the finest crew I ever coxed, and like all Mr Bruce’s crews, came to the post in the pink of physical fitness.” Skinner later goes on to point out that 5 members of the crew lost their lives in the War (The Jesus College Boat Club, F. Brittain and H. B. Playford, 1928, p41).

"Doing his duty like the brave man he was"

Hugh Shields was shot and killed while attending a wounded man.

His commanding office, Lt-Col Lord Ardee, wrote to his parents on 27 October 1914 to report his death, saying that “The way in which he insisted on attending to wounded men under fire was the admiration of us all” (Jesus College Cambridge Society Annual Report 1915, p24).

Tributes after his death suggest that he would put himself at risk to tend to German wounded as well as comrades and paid tribute to his courage in tending to the wounded.

“He died killed in action doing his duty like the brave man he was. The fact of their medical officer being at hand has a great moral effect on men in a tight corner - poor Shields appreciated this fact and made his presence felt” Major Irvine, RAMC.

Shields wrote a letter home on 25 October in which he says “I must say it was very frightening work running up and down behind the trenches to see men who were wounded, as the bullets were rather thick at times” (A War Diary, 12 August to 25 October 1914, H. J. S. Shields, p41).

Henry Mills Goldsmith, a fellow member of the crew that rowed in Ghent, wrote to Hugh’s parents that “he was quite the best fellow in every sense of the word that I have ever met” (A War Diary, p47).

A printed copy of Hugh Shields’ War Diary, including copies of letters received by his family after his death is available online via the Wellcome Library.