Hugh Anthony Rupert Crookham, came up from Felsted School in October 1912 with a £40 Classics Scholarship (Rustat).

Died of meningitis due to wounds: 4 August 1915 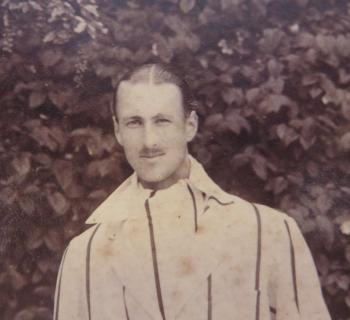 Tennis in his own style

Other than being a “good” Classicist (Jesus College Cambridge Society Annual Report, 1916, p20) he also played in the tennis six for the College in his second year where he played doubles with H. B. Salmon (1910).

He seems to have had his own style and was reminded by the Captain, E. N. Dexter, that “a slow second service which gets in is better than a fast one which misses the court altogether” (Chanticlere, Easter Term 1914, p38).

There is one other mention of Crookham in Chanticlere which is quite intriguing and seems to show some unsavory student bullying. Under a section entitled “Gentle Admonitions” there are a number of reproofs to various students including H.A.R.C. who is told: “Don’t wear a brooch in your tie; it is the outward and visible sign of a cloaked but suggested fact” (Chanticlere, Michaelmas Term 1913, p16).

While at Jesus he was an active member of the OTC and as such he is gazetted to 2nd Lieutenant in the Cambridgeshire Regiment at the outbreak of war. In his obituary in the Jesus College Society Annual Report it is recorded that he “did much good work in training troops on Parker’s Piece and elsewhere” (p20).

We have a description of what Cambridge was like in these early days of the War. In the first Chanticlere after the war the Master, Arthur Gray, wrote an article about “The College in War Time” where he describes the scenes in Cambridge in August 1914.

“I went out to Midsummer Common and to my amazement found the whole of it covered with tents. Men were lighting fires: food was being cooked: some men were kicking footballs about…. Not only Midsummer Common was occupied. Stourbridge Common, Parker’s Piece, and every open space about the town was similarly populated” (Chanticlere, Michaelmas Term 1919, p8).

Crookham left England after nine months and became a Lieutenant, two weeks later he received serious injuries including a fractured knee and a serious head wound in Flanders.

In a newspaper cutting kept by the Head Porter, James Hoppett, it says that he was removed from the battlefield to the 82nd brigade Ambulance “where the operation of trepanning was performed.”

Unfortunately the operation was not successful and he contracted meningitis from which he died on 4 August 1915.