​Hazlett Samuel Allison, came up to Jesus College in 1911 after attending Campbell College in Belfast. 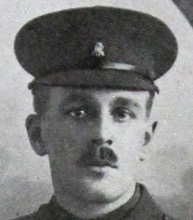 He left Jesus in 1914, after achieving a B.A. through the Natural Sciences Tripos and had begun a medical career having taken the first examination in Medicine. (Jesus College Cambridge Society Annual Report 1917, p17).

Whilst at College he took part in the University rugby trials in his first year, but appears not to have been successful and was not a member of the first XV for college. He may well have switched his attentions to golf and played for the ‘Varsity in 1914 (Chanticlere, Lent Term 1914, p14).

He was a member of the Officer Training Corps, and was quickly promoted to Lance Corporal by the end of his first year (Chanticlere, Easter Term 1912, p36). We know little about his activity in the OTC directly but there is a detailed report of “’I’ Company at camp” in the summer of 1913 at which there is a good chance Allison was present. The report finished with the declaration that their “greatest triumph of all was the winning of the trench-digging competition” (Chanticlere, Michaelmas Term 1913, p14).

Allison’s obituary in the 1917 Annual Report records his promotion through the ranks of the Royal Irish Guards. From his original Commission as Second Lieutenant, he became “Lieutenant in December 1914, Captain in April 1916 and Major on December 1, 1916”. (Jesus College Cambridge Society Annual Report , 1917, p. 17).  The website Our Heroes: Ar Laochra gives further details, including the image above, which we use with acknowledgement and thanks.