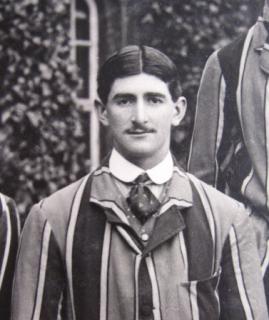 He graduated in 1908 having successfully completed the Maths Tripos as a Junior Optimes. (The Historical Register of the University of Cambridge to the year 1910, p593)

Goodwin was also a very successful sportsman. At College he took part in many different sports, turning his hand to tennis, 120 yard hurdles, the hammer and playing in goal in Association Football. However, these were not his main sports, they were hockey and cricket both of which he also played at University level. At hockey he played internationally though it seems cricket was his main sport. Whilst at Cambridge he played for Warwickshire going on to captain them after he left university.

In his very first cricket match for College he scored 43 runs in the first innings, 53 in the second and took two wickets. In his second year his cricket highlight was an unbeaten 97 in a rain affected match. In his last year he scored 104 in a match against King’s (Jesus College Cambridge Society Annual Report 1906, 1907, 1908).

Hockey was flourishing in College in the early years of the twentieth century, indeed the 1908 Annual Report claimed that “four teams could have turned out together”. Goodwin, who played for England in 1908, was the Captain and chief goal scorer. The record of the first team in 1907-08 speaks for itself: “Played 10, won 10. Goals for 66; against 16” (p34).

At the outbreak of War he had initially trained with the V.D.C. before joining a Cadet Unit. He was then gazetted in December 1916 and had left for the front just few weeks prior to his death. He left a widow and son. His death would have been particularly keenly felt in College as his uncle J.H.H. Goodwin was the College Bursar.