Greville Oxley Brunwin-Hales came up to Jesus College in 1907 from Winchester College.​ 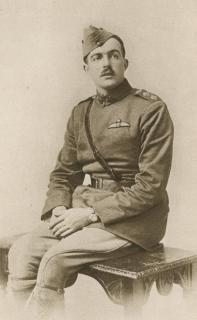 He left in June 1910 after having taken an Agriculture Diploma. According to his obituary in the Jesus College Cambridge Society Annual Report he went on to be the land agent for the architect and writer Christopher Hatton Turnor of Stoke Rochford Hall in Lincolnshire as well as the Dowager Lady Carnarvon.

The Annual Report hints that he was driven by his academic work as he is described as an “attractive cricketer, but laboratory work prevented his taking a regular part in games”. (Jesus College Cambridge Society Annual Report, p. 21). Indeed, he is not mentioned in any of the reports of the Jesus College Cricket Club. He did manage to take part in some athletics, throwing the hammer to a distance of 72 feet in November 1909. (Chanticlere, Michaelmas Term,1909, p. 45).

For his Agriculture Diploma he would have studied Agriculture, Agricultural Chemistry and Physics, Agricultural Botany and Zoology and possibly Geology and Forestry as voluntary subjects. (Cambridge Calendar 1909-10 p. 174).

He was gazetted to Flight Commander in December 1916 and was killed “while flying at the front” in March 1917. “He is understood to have brought down many enemy aeroplanes. (Jesus College Cambridge Society Annual Report, 1917, p. 21). A small newspaper snippet in the Head Porter’s scrapbook, kept during the war, claims brought down “27 machines”.

Image by kind permission of The Warden and Scholars of Winchester College.