George Eric Fairbairn came up to Jesus College in October 1906. 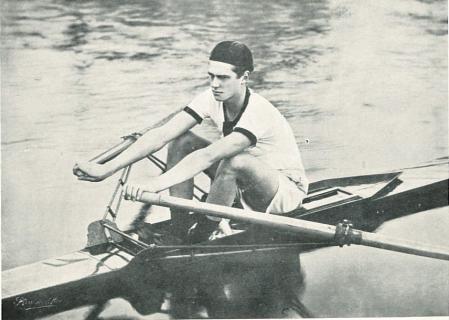 "Eric" had attended various schools in Australia and had a short spell as a “wet bob” at Eton. He was the nephew of Steve Fairbairn, an old Jesus student who returned in 1904 and is credited with reviving Jesus College Boat Club and creating the “Fairbairn style” of rowing.

Eric Fairbairn was to take after his uncle and achieve great heights as oarsman for the College and the University. His long and distinguished rowing record (achieved in spite of bouts of illness) for the College is as follows:

1909 in 1st May boat which regained headship, stroked in final of the Grand (v. Ghent).

1910 winner of Lowes, stroked head of the river and in final of the Grand.

He was the 9th Cambridge rowing blue and the 4th member of the great Jesus crew that beat the Belgians at Terdonck in 1911 to be claimed by the fighting. In a poem that was written to celebrate the Terdonck victory his personality is described vividly:

‘Ere fiercely upsprang
Eric the mighty;
Red was his face
And Blue was his raiment
Kinsman was he
To Steve the great trainer
(Chanticlere, May Term 1911, p33)

Eric was clearly highly accomplished in his chosen sport. Chanticlere describing him as stroking a coxswainless four with a “splendid rhythm” and being one of the “finest scullers seen up here”.

He was also a great character and greatly admired by his peers. A “Cock of the Roost” article about him gives a flavour of this: “Like all geniuses, he has idiosyncrasies. He hates collars, takes no milk in his tea through fear of dead flies, and is a confirmed Peripatetic after bump-suppers” (Chanticlere, Lent Term 1909, p53 and p37 respectively).

He was associated with the College for a number of years, either rowing or coaching College boats and his death in France in June 1915 was felt “by a long succession of Jesus men with whom he was deservedly a great favourite” (Jesus College Society Annual Report, 1915, p26).