Geoffrey Montagu Bradley came up to Jesus College from Dover College in 1911. 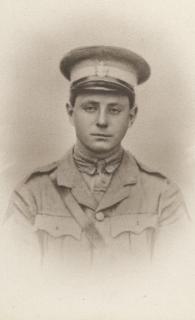 "The most cheerful of youths"

He received an Entrance Exhibitions scholarship for Classics of £30. In 1912 he was to follow in his brother’s (E. J. Bradley) footsteps and was elected a scholar based on the results of his College examinations. He went on to attain a lower second in the Classics Tripos. The obituary in the Jesus College Society Annual Report 1915 records that “He was the most cheerful of youths with a laugh and a smile for everyone, and was almost the life and soul of his year” (p29).

This is borne out in the student magazine Chanticlere where there are numerous mentions of him as a good rugby player, a fine shot and writer of note, possibly of the magazine itself. In the Easter Term 1913 edition the final verse of a poem entitled “Hustled History” (p27) reads:

"Chanticlere bereft of Bradley
Would be like Pemmer without Hadley.
He plies the quill with graceful ease,
Beloved of the Pierides"

Chanticlere also gives us an insight into his military career, recording that in the Officer Training Corps he was promoted from Private to Corporal during 1912.

The Michaelmas Term Edition 1913 featured a poem entitled “A College Alphabet” in which, “B is for Bradley, a military spasm; Also a bard (vide Chanticlere, passim)". The Society’s Annual Report states that he “shot at Bisley for Cambridge for the Chancellor’s Plate” (p29).

President of the Roosters

He was a versatile young man, not only a keen sportsman, writer, officer cadet but also an active member of the debating society, The Roosters. In Michaelmas 1913 he was elected President of the Roosters, following a stint as Secretary in Michaelmas 1912 and Vice President in Lent 1913.

In a letter written to the Master, Arthur Gray, on 11 November 1915, Geoffrey’s father Edwin Bradley, says that Geoffrey was “ordered to the front quite suddenly" (it was on 12 November 1914).

Mr Bradley also reports on how his other son, also called Edwin and a Jesuan, is doing in the war, stating that he was a Captain in the Royal Army Medical Corps in Alexandria. Mr Bradley, a school master, also expresses great pride in all those fighting in the war, writing:

“How splendid these young fellows have been, and are. Facing death and terrible hardships in the finest spirit.” 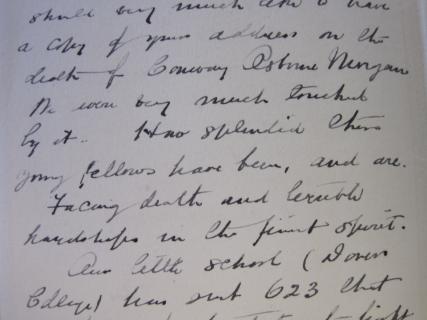