Geoffrey Barham Johnson came up in 1912 after being at St George’s Choir School Windsor and Gresham’s School in Holt. 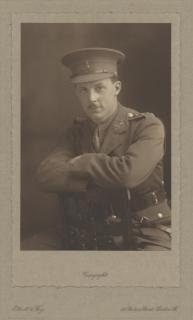 His College career began with the Mathematics tripos but after the first year he switched to Theology, with a view to following in his father’s footsteps to ordination. He did not complete his studies, but was awarded a degree in any case on account of his military service.

We are very lucky to have Geoffrey’s photograph album from his time at Jesus College from 1912-14 as it provides us with a rare visual insight into students’ lives in this period.

The photos are largely rowing pictures as Johnson rowed regularly in the second boat and sculled at least once in the Colquhoun Sculls where he was “unfortunate in meeting the ultimate winner” (Chanticlere, Michaelmas Term 1913, p32). He also coached some of the College boats.

There are individual photographs of his friends; Geoffrey Bradley, George “Cheeks” Payne and Edward Myddelton amongst them, as well as one of them all dining in Johnson’s room, where they appear to be about to enjoy a sumptuous five course meal.

There are also a couple of large group May Ball images as well as one or two informal ones of students wandering along the tow path.

The coronation of Edward VII

Geoffrey’s great nephew Mr Richard Bawden, a grandson of his older brother Jack has recently supplied us with a memoir, compiled from family diaries and letters.

Jack and Geoffrey went to St George’s choir school in Windsor and were members of the choir that sang at the coronation of King Edward VII and Queen Alexandra in Westminster Abbey on 9 August 1902. As such they were the first to perform Parry's anthem "I was glad". The boys of the choir were sustained by chocolate, which melted in their pockets, and all left their seats, hoping to catch a glimpse of the King at the moment of crowning. They also missed their cue and started the anthem early, so the organist had to extemporise until the procession was actually ready to start.

Thirteen years later, Geoffrey Johnson was killed in action in France on 22 November 1915.