Francis William Clarke came up in 1894 from Dulwich College. 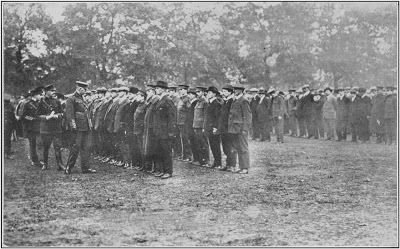 We have very little information on him other than what appears in Alumni Cantabrigienses  by J. A. Venn which tells us that came up with a scholarship of £40 for classics. He was awarded his degree in 1897, having taken Part I Classics.

Unfortunately he falls foul of some errors and lapses in college and university records: he did not appear in the The War List of the University of Cambridge 1914-18 nor did Jesus College Society Annual Report provide an obituary for him. The examinations record for Jesus students is incomplete for those that matriculated between 1883 and 1895.

There is one small piece of information to be gleaned from these two lists: in the list of freshmen it is noted that he got his colours for the Football XV while at school.

He volunteered for the Sportsman’s Battalion soon after the start of the War (his army number was SPT 96). He died of his wounds at Rouen and in spite of the lack of record at the time is remembered on the College Memorial in Cloister Court.

Our image comes from The 23rd (service) Battalion Royal Fusiliers (First Sportsman's) - a record of its services in the Great War, 1914-1919 by Fred W Ward (1920). It shows the new battalion, many not yet issued with uniforms, on parade in Hyde Park in October 1914. This book may be read online via Project Gutenburg.