Francis Gerald Hudson came up to Cambridge in 1904, after being privately educated. 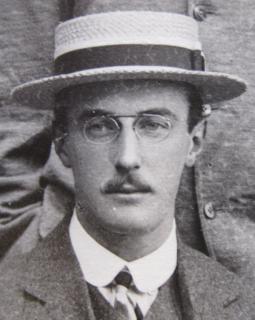 His brother Henry Cecil Harland Hudson also joined the College in 1906. Francis (known as Gerald) Hudson was awarded his BA in 1908. The circumstances surrounding Hudson’s premature death are unclear. He does not appear in The War List of the University of Cambridge 1914-1918, nor is he commemorated on the First World War memorial in College. But he does seem to have put himself in harm’s way in service of his country, with fatal consequences.

At the start of the war he was at his family home in Christiania, Norway (Oslo), and he volunteered his services to the Admiralty and later the Foreign Office.

He became the Vice-Consul of Aalesund where he was in charge of monitoring “200 miles of the Norwegian coast against contraband and the machinations of the enemy”. The Jesus College Society Annual Report claims that he was “Constantly followed about by enemy agents and was just the sort of man to observe closely and act with prudence and firmness” (June 1916, p16).

He died on 4 January 1916 after an accident of which there are no further details.

Captain of the Boat Club

Hudson matriculated in the same year that Steve Fairbairn returned to College to coach the Jesus College Boat Club to many successes over the following few years.

The first Chanticlere that Hudson would have read, Michaelmas Term 1904, featured a forthright article on the “Points of Rowing” by one S. Fairbairn where he advised: “the young oar should practise the turning of his button in a tub many hundreds and thousands of times, till he gets it perfect” (p502).

Hudson must have taken this advice as he was in the winning boat in the Trial Eights (three crews) in November 1904, which had to race over a shortened course “from the Red Grind to the Cart Grind” due to there being too much ice on the river.

His rowing career went from strength to strength throughout his time at College becoming Captain of the Boat Club in the 1907-08 season.

Hudson was the fifth and final member of the great rowing crew that defeated the Belgians in 1911 to die during the war. The Jesus College Cambridge Society Annual Report’s obituary records that “He was one of the best liked men in and out of his college, respected for his fine character and beloved for his qualities as companion and friend” (June 1916, p16).