Francis Bernard Roberts came up to Jesus College in 1901 as a Rustat Scholar from Rossall School in Lancashire. 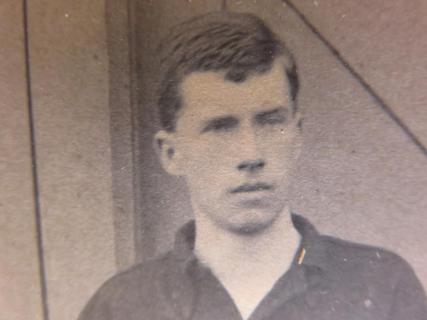 The Jesus College Society Annual Report obituary for Roberts states that “Besides being a good scholar he was an exceptionally good athlete” (1916, p28). This is plain to see throughout the editions of the student magazine, Chanticlere, published during his time at College. He is recorded as playing association football, hockey and cricket, largely for the College but also for the university. His university football career was short as, according to Chanticlere, he was played out of position.

He also played cricket for Gloucestershire, and has an entry in the cricketing bible Wisden which shows that he was something of an all-rounder, having scored 5 centuries and achieved best bowling figures of 5/69.

There is little to describe Roberts as an individual whilst at College. Had he been a student just a few years later he would undoubtedly have been the subject of a “Cock of the Roost” article in Chanticlere which might have given us insight into his personality. However, it is interesting to note that the Hockey Club was formed during his time as a student and he was to become the Honorary Secretary in 1903.

Furthermore the association football team was described as being just that: “a team”. At a dinner, held on 11 March 1903 to celebrate “the brilliant success of the Association team in the league… the toast of the evening was, of course, ‘The Team’.” Chanticlere goes on to say that “Previous teams had owed their successes to the skill and effort of individuals: but the present team secured its victory through sound captaincy and all-round efficiency” (Easter and Michaelmas Terms, 1903, p462).

He achieved his BA in 1904 with a second class degree (division 1) in the Classical Tripos, Part I. Roberts went on to become an Assistant Master at Wellington College and was commissioned in 1914. He was killed in action in Flanders on 8 February 1916.