Eustace Mars Aron came to Jesus College at the age of 24. 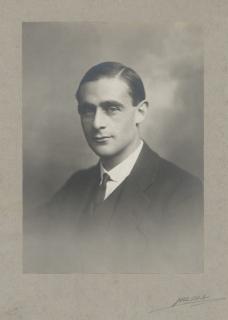 He had been educated at University College School in London and had then gone to Brazil to take up a job in commerce. He came to Cambridge in 1910 to read Medieval and Modern Languages. He excelled at languages, after his first year exams he was made a scholar (Jesus College Society Annual Report, 1912, p16). In his second year he gained a first in German and in his final year he gained a first, with distinction, in MML Spanish.

At the time of the writing of his obituary in 1917 he was “the only man who had ever taken a first in Spanish” (Jesus College Society Annual Report, 1917, p18). In 1912 and 1913 the MML Tripos for each language consisted of six written papers which could only be taken once an oral examination had taken place. In both years Aron had to take six 3 hour papers on:

"A serious loss to learning"

Aron was clearly a scholar with a remarkable amount of potential, which was sadly not to be realised. Unsurprisingly his loss was keenly felt by the College, and the wider academic community. As his obituarist says: “His loss is a very serious one to learning, as he had no intention of taking up commerce again.”

The College still holds some of Eustace’s German text books in the Old Library, carefully annotated in his tiny handwriting. Perhaps he left them, expecting to return?