Ernest William Jones was admitted to Jesus College in May 1914 with the intention of reading Law from October 1914. 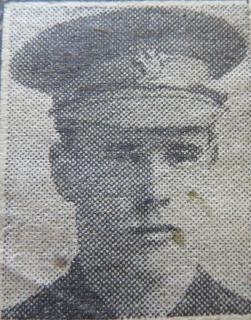 He had previously attended Ongar Grammar School, St Francis Xavier College, Bruges and King’s College London. When war broke out he obtained a commission with the 8th Welsh Regiment as a 2nd Lieutenant and thus never came up.

In spite of this, we have a small news clipping (including the above photo) about Jones’s fate, kept by James Hoppett, the Head Porter as part of a scrapbook of war news and later deposited in the College Archives.

It is not known what newspaper the obituary headed “Young Patriot’s Sacrifice” comes from, but within it there is a small hint of growing disillusion with the war.

“When the history of the Great War comes to be written one of its features will be the large number of comparative youths who threw a future career of promise to the winds at the call of King and country”.

Jones died in Malta of dysentery contracted while on active service in Gallipoli.