Eric Francis Howard Taylor came to University in 1909 to read agriculture but left before completing the course. 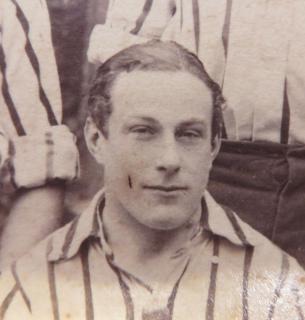 The last entry for Taylor in the College examinations book is March 1910 and it might be assumed that he left at this point. However, he crops up in a photograph of the Jesus College 2nd Hockey team in 1912 which is also verified by a mention in the Lent Term 1912 edition of Chanticlere: “E.F. Taylor is a reliable back”.

There is very little further information on Taylor, other than a short obituary for him in the Jesus College Society Annual Report, 1917 where it records that he enlisted in the sportsmen’s battalion at the outbreak of war.

The obituary also records a message from a “Lieut-Colonel H. H. Yerdun” which could be a printer’s "joke" but is a most likely a transcription error that should read “Lieut-Colonel H. A. Vernon”. The Lieut-Colonel wrote that Taylor “was an extremely good officer and very popular with the men. He showed great courage and coolness in the attack” (Jesus College Society Annual Report,1917, p38).