Elliot Blair Grasett, came up to Cambridge from Hereford School, in 1907. 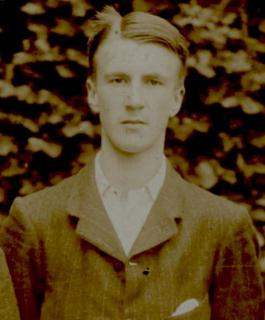 It appears that Grasett did not come directly to Jesus College but transferred here in Lent term 1908 as a choral scholar. Our picture comes from Hereford School. We have no records of his formal choral activities but Chanticlere records him singing at a Smoking Concert in Lent Term 1910:

“The requests of Mr Grasett for Obadiah to swing him over the garden wall were received with enthusiasm, and the chorus was neatly executed by all.”

The song in question was a music hall ditty entitled “Swing me higher, Obadiah” and was originally performed by Australian-born performer Florrie Ford in 1907, so it was a relatively recent “hit”.

CUOTC to the Indian Army

He was also a member of the OTC and it is recorded that he was promoted from Private to Lance-Corporal in Michaelmas Term 1910. The Jesus contingent (I Company) at that that time had a membership of 70 (Chanticlere, p42). Elliot, graduated in 1911 with a BA in Modern Languages and joined the army, being commissioned to the Indian army. Before his posting to France he was part of the action against the Turks at Suez in February 1915.

He died at the Battle of Loos and is remembered on the Indian Army memorial at Neuve-Chapelle.