Edward Stanley Strachan came up to Cambridge from Merchant Taylors’ School in 1898. 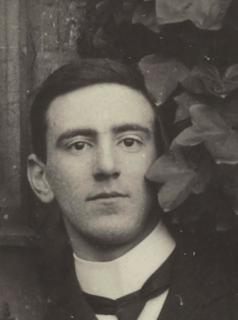 A brief career on the river

We have little information on Strachan’s time in College. He appears to have coxed the second boat in Lent term 1899, but his career on the river seems to have been brief.

At 9st 10 lbs (according to the records of Jesus College Boat Club) or 10st 6lbs (according to Chanticlere) he may have been deemed to be too heavy to be anything more than a temporary cox.

The cox has to balance a lightweight frame and skill in steering. William Ainley (also died in October 1915) was “undoubtedly the best coxswain on the river but rather too heavy” and weighed in at 8st 12lbs, so Strachan was at a considerable disadvantage before he even started.

His obituary in the Jesus College Cambridge Society Annual Report records that he was good friends with the Master’s son, Jack Gray, who fought with him in the same regiment.

Gray was able to tell the Society that Strachan, who had been recorded as “missing believed killed” in the Times on 1 November 1915, had actually died in the Hohenzollern Redoubt on 14 October 1915. Gray also says that “Strachan was one of the best officers they had, always ready to do more than his share of the hard work” (p30).

Gray and Strachan were not the only Jesus connection to the Sherwood Foresters. In all, 8 Jesuans served in that regiment and half of them lost their lives.

The only Jesuan to win a Victoria Cross in the Great War, Bernard Vann was a member of the same battalion and also present in the Hohenzollern Redoubt. A description of the battle can be found in The Sherwood Foresters in the Great War 1914—1919 by W C C Weetman which is available via Project Gutenberg.