Edward Geoffrey Myddelton came up to Jesus College in 1912 from Wellingborough as a Foundation Scholar. 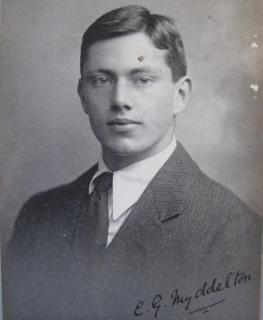 He gained a first class in Part I Mathematics in 1913 and would have become “wrangler” in 1915.

He was also a member of The Roosters, The Jesus College Debating Society, which during Myddelton’s time debated such subjects as votes for women, Irish home rule and whether or not sugar in tea was a sign of original sin. (The First Twenty Years of The Roosters, F. Brittain, p11).

Myddelton was considered to have some military experience as Second Lieutenant in the Special Reserve of Officers so when war broke out he was amongst the first to be sent out with the Expeditionary Force. He took part in the retreat of Mons and was unofficially reported killed at La Cateau on 26 August.

His death was not officially reported to his parents until 15 January 1915. A member of the regiment who was with Mr Myddelton wrote:

“Mr Myddelton, on 26 August, was about four hundred yards in front of me in some high root crops, just over the top of the rise in front. His platoon seem to have been unable to fall back (or got no orders to fall back) on to us. A gun was brought up against his flank on the cutting formed by the Le Cateau road, where it leaves this town towards Cambrai, with several machine guns, and none of us saw him again, or could get any news of him.

The ground was directly afterwards occupied by the enemy. There can be little doubt that he was killed instantly… He died in the very front line, holding off the heaviest blows on that day, and giving us time to prepare for a time to meet them.” (The British Roll of Honour.)