Edward Crozier MacBryan came up in 1912 from Oundle School where he had been captain of the school football team. 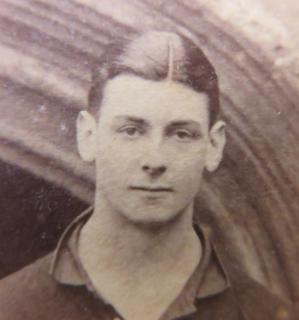 Rugby seems to have been his favoured sport while at Jesus, where he played wing three quarter. In his first season playing for College it seems he started off well but faded towards the end. He was described as having “A good kick, but not accurate with his hands” (Chanticlere, Michaelmas Term 1912, p29).

By his second year he had become the Honorary Secretary of the JCRFU but had not improved his general game; Chanticlere declared that he had “had not fulfilled expectations”. He was still a good kicker but he “lacks dash” (Michaelmas Term 1913, p33).

"As lucid and incoherent as usual"

"Under “Gentle Admonitions”, an article in Chanticlere, he is told “Don’t be disconsolate, because Bradley knows all about it, and can advise you” (Michaelmas Term 1913, p16). We do not know what he was disconsolate about.

Chanticlere also records that MacBryan became a member of the Natives in 1913 and was preparing his inaugural speech, along with several other students, which would “be as lucid and incoherent as usual” (Michaelmas Term 1913, p11).

He joined up at the start of the war and the Jesus College Society Annual Report 1917 obituary says that he was badly wounded at Ypres in May 1915.

MacBryan's brother, John Crawford William was wounded at Le Cateau and taken prisoner in 1914. He came up in 1919 and in spite of the lasting effects of his wound later played cricket for the 'Varsity. He died in 1983 at the age of 91 (Jesus College Cambridge Society Annual Report 1984).