Douglas Carmichael, came up to Cambridge from the Leys School, Cambridge in October 1911. 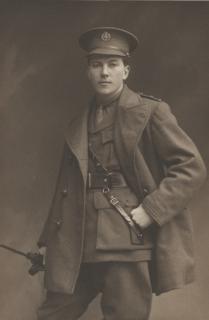 The student magazine, Chanticlere, does not mention him throughout his three years at College. However, he was evidently a talented singer and actor.

The Jesus College Cambridge Society Annual Report 1916, records in Carmichael’s obituary that “he was a very popular member of the “Footlights” and played “leading lady” in the 1912-13 May week productions”.

The obituary writer felt it important to qualify this by saying: “But there was nothing effeminate about him” (p19). He was also a member of the Footlights Club Quartette which sang regularly at College Smoking Concerts, so it is easy to imagine that he might have had a fine alto or counter-tenor voice as well as carrying off the elegant frocks provided for the "ladies" of the cast.

As well as his talents as a performer, Douglas had stints as Footlights Stage Manager and Business Manager.

The main information we have on Carmichael’s war service comes from a 1914 -18 newspaper cutting book that was maintained by Head Porter, James Hoppett.

It is unknown from which newspaper the cuttings are taken but there is one particularly long piece describing Carmichael’s heroics in battle. The headline reads “Fearless young Captain. Killed in taking four German lines. Hopping in a charge.”

“I shall never see a soldier like him again; it is quite impossible that anyone so fearless could ever be found.” He goes on to say “When masses of Germans came against him, by his wonderful personality he kept his men, reduced to a handful, in good spirits, and led them again and again to the attack”.

His Sergeant, W Walker, wrote that “Captain Carmichael led us until he was in hit in the leg. He refused to have any assistance, and just afterwards I saw him hopping on one leg towards the next line of German trenches.” Carmichael was eventually killed instantaneously by a machine gun bullet to the head.

Both the commanding officer and the sergeant felt he should have been awarded the V.C. several times over.