David Rex Wilson came up to Jesus College from Clifton College in January 1910. 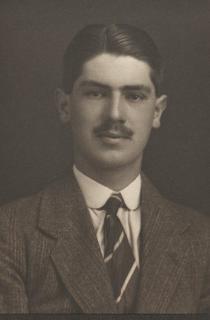 Wilson took Natural Sciences Part I and was allowed a BA in June 1912. Despite joining College in Lent Term he apparently became “a leading spirit in the College, where he was much liked and looked up to” (Jesus College Cambridge Society Annual Report 1915, p28).

Wilson was a member of the College Rifle Club and a Captain in the Officer Training Corps. He was obviously a top marksman as he attained a Blue, “shooting for the Varsity” and in 1911 was 38th in the King’s Hundred at Bisley.

Wilson was obviously something of a College character. In a section entitled “Heard in the Chimney” in Chanticlere, Wilson is congratulated on his prompt action at the Lents bonfire when there were two casualties and he delivered “Fursht aid to the sinjured” (Chanticlere, Lent Term 1912, p17).

A flavour of his personality can also be gleaned from the Easter Term edition of Chanticlere, where the editors proposed an alternative entertainment in the absence of a College Ball and any “harmonic refreshment” from the Music Society. One feature of this hypothetical show was to be a “Humerous Turn” of “Natural History Sketches by DRW” (Chanticlere,Easter Term 1912, p30).

It is perhaps a good thing this was only a suggested programme as it is clear that Wilson was studying hard at this point as the report from the Rifle Club shows. The J.C.R.C hopes would “again grow brighter when it is rumoured that their captain D. R. Wilson, once released from the toils of a Tripos, will turn his mind to the personal cultivation of a Half-Blue” (Chanticlere, Easter Term 1912, p30).

Wilson received his commission in March 1913 and was killed in action near Ypres on 30 October 1914. A newspaper report claims that he was killed in the trenches “which he and his platoon had taken earlier in the day from the enemy”.