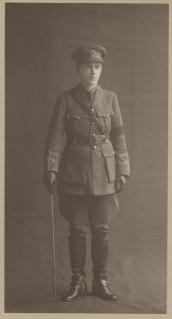 As David Malcolm Fell came up in 1914, when College life was severely disrupted due to the war, there is very little information about him other than the photograph (in which he is wearing a black arm band) and an obituary in the Jesus College Society Annual Report,1917.

He was educated at Sydney Church of England Grammar School and was admitted a member of the Inner Temple on 20 November 1914.

During his short stay at College he took a training course for officers held at Pembroke College and was then gazetted in November 1915 before leaving for the front in Spring 1916.

The obituary includes a quote from an unknown source: “He was killed in the early morning by a hidden machine gun when actually within a few yards of the enemy position. He was always one of the most cheery of people” (Jesus College Society Annual Report 1917, p24).