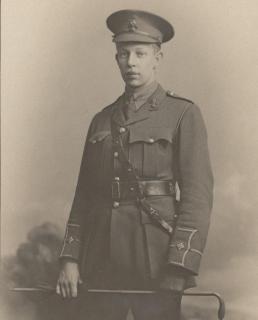 He was the youngest of three brothers who had been at Jesus. We have very little information about his time here, but the Jesus College Society Annual Report 1915 obituary for him records that he “Had great influence, all for good, among his numerous friends” (p31).

It also records that he was an oarsman and the Jesus College Boat Club records confirm this, showing that he made it to the second boat for Lent bumps in 1912, where he rowed at 6 and weighed 12 stone. In the May races that year he was at No 4 in the third boat.

He had improved sufficiently to make it into the first boat in Lent term 1913, although they were bumped by the fast 1st Trinity boat on the first day and struggled to get back on form until the last day.

Chanticlere reported “inexperienced crews find it difficult to settle down and eliminate all signs of bustle when they have a following wind” (Chanticlere, Lent Term 1913, p28). Banister continued to row for the College throughout his student days.

At the outbreak of war Banister obtained a nomination to the Royal Military College at Sandhurst and was gazetted to the 5th Battalion, Royal Fusiliers on 18th February 1915. He left for France one week before he died.