Charles Geoffrey Tomlin came up from Uppingham School in 1910 with a strong record in cricket, rugby and hockey. 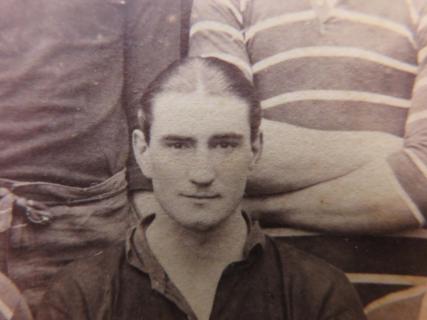 Once at College he continued his sporting prowess, rising to Captain of the rugby team by his final year and was described in the Annual Report as “being one of the best wicket-keepers we have ever had” (Jesus College Society Annual Report ,1917, pp38-39).

As a result of his sporting achievements he is given the honour of a “Cocks of the Roost” profile in the student magazine, Chanticlere, Michaelmas Term 1912, pp20 - 22.

The article concentrates largely on his sporting abilities, claiming that he was “heroic” in the lineout “where he is well worth watching, eyebrows down and elbows up, dealing black eyes to friends and foe alike”.

On the cricket field, not only was he agile behind the stumps but “he is a most reliable number eleven and was the hero of a remarkable stand against the Nomads last summer”.

The article also describes some of his other interests which included golf and tennis but it claims his “greatest delight” is to be in the saddle. “He is overjoyed (when the vac. comes) to hie him away to Whaddon Chase.”

Away from sporting activities he is described as being “the greatest social acquisition of his year to Jesus” as he was heavily involved in the Radegunds, the Natives, the Stratfords and the Alcock Glee Quartette.

He was also, apparently, “very fond of dumb animals”, with a special regard for guinea-pigs but most especially beloved was his Skyeish fox-terrier: “Whiskers”.

Sadly for Tomlin his father died during Michaelmas Term 1912 so he was unable to complete his degree.

He joined up at the outbreak of war, was wounded in May 1915 and again in France in July 1916 from which he was unable to recover.