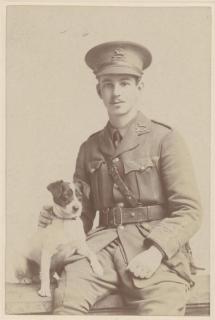 He was one of the best association footballers the College produced before the war. He not only played for the College and the University but also the English national amateur team.

He largely played at centre-half, though there is a record of him playing at centre-forward for the College team in his final year.

The ‘Varsity match against Oxford was played at Queen’s Club in London each year and in 1912 Cambridge beat Oxford with Evers described by the Sportsman as “the best half on the field”.

What is surprising, given the usual image of centre-halves, is that he is described throughout Chanticlere as small – “a nice little laddie” known as “Babe” (Chanticlere, Michaelmas Term 1912, p22).

Hockey and other sports

Evers also played hockey, one reporter describing him thus: “when scratching for the ball he rather reminds one of a badger burrowing in a midden”. (Chanticlere, Easter Term, page 43). This may or may not have been meant as a compliment!

"An unfortunate difference of opinion with some austere examiners"

From the short article about him in Chanticlere it appears that he may not have been a very studious student – “he had a most unfortunate difference of opinion with some austere examiners last May.” (Michaelmas Term 1912, page 23.) However, the examinations book shows that he did apply himself and succeeded in passing History Special I and II in 1912 as well as Theology Special I and II in 1913.

"Decidedly proud of being a Yorkshire man"

The article rounds off by saying he had good tastes in pipes and was above all “decidedly proud of being a Yorkshire man… a thoroughly good fellow and the best of Babes”.

He enlisted in the West Yorkshire regiment as a private, received a commission in the same regiment. He was wounded at Gallipoli before being promoted to Captain. “He fell leading his men splendidly” on 14 September 1916 (Jesus College Society Annual Report 1917, p24).