Bernard Vann was born at Rushden in Northamptonshire and attended Archbishop Chichele’s College, Higham Ferrars, where he was Captain of Soccer, Hockey and Cricket. 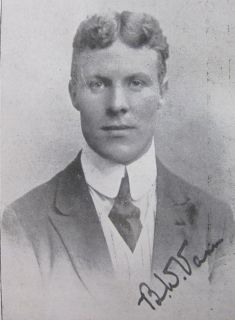 On leaving school he did not come up to Cambridge straight away but worked as a master at Ashby de la Zouch school.  During this period he played for Northampton, Burton United and Derby County at soccer and also achieved hockey colours for Leicestershire.  He arrived at Jesus a year later, matriculating in 1907.  The College admissions register noted that his father A.G.C. Vann esquire had died by this time.  “Bertie” as he was known to colleagues took a third in part I of the History Tripos and a second in part II.  Although not a star academically he seems to have been a popular and charismatic figure who soon made a name for himself at the College.

According to a profile published in The Chanticlere in 1910 (Lent Term, p.14) he had already established a way with words before coming to Cambridge:

“…his speeches were early remarkable for a certain eloquence quite untrammelled by any considerations of grammatical lucidity”  He pursued this interest in speech-making during his time at Jesus where he was a member and President of the Farragoes debating society and a founder and later president of the Roosters.

According to a short piece in the College magazine, The Chanticlere (possibly written by Vann himself, who was secretary of the Farragoes at the time): “The Farragoes represent the Jesus House of Lords…the Roosters being the Commons.  The Farragoes are always ready at any time, with or without notice, to express an opinion on any subject, wise or foolish and can be relied on to bring to the consideration of it well-stored and subtle minds” (Chanticlere Michaelmas1909 p.23)

Vann’s way with words and obviously rather dashing attitude to grammar continued to attract satirical comment from his fellow students throughout his time at Jesus.  In 1909 a colleague quotes from a Midsummer Night’s Dream “His speech was like a tangled chain; nothing impaired all disordered”​ (Chanticlere May1909 p.28)

Another colleague wrote of his style in a mock book review: “The author has used that vivid torrential style with which we are all familiar.  It is perhaps overdoing the dramatic to leave alternate sentences unfinished."  (Chanticlere May1909 p.36)

Vann’s College sports career was also successful.  He was captain of the soccer team in 1910.  As centre forward he was “dashing…possessing both pace and weight…a good shot with either foot he is always very dangerous in front of goal” (Chanticlere Lent1909 p.61) However he found most recognition as a hockey player, being awarded his blue in 1910 and representing the University several times.  He played at outside right and was described as “very fast and clever” although inclined to be selfish and not to pass too often! (Chanticlere May Term 1909 p.46)

He was joined at Jesus in 1909 by his brother Arthur “Baby” Vann, with whom he played in College Soccer team.  In spite of his nickname, "Baby" was actually Bernard's older brother. A “Soccer Retrospect” in The Chanticlere comments that Arthur at outside right was “Good until he gets in front of goal.  Combines well with his brother” (Chanticlere Lent Term 1910 p. 50)

On leaving Jesus in 1910 Vann was ordained Deacon and was curate of St Barnabas New Humberstone Leicestershire from 1910 and assistant master and chaplain at Wellingborough School from 1912 until he joined the 28th London Regiment as a private soldier in 1915.  It was understood that he was impatient to join the fighting and could not obtain a post as Army Chaplain quickly enough.  Sadly his brother Arthur was killed in action while serving with West Yorkshire regiment in September of that year. See his profile here.

Vann’s military career was distinguished.  He rose to become Lieutenant Colonel in the Sherwood Foresters and was awarded the Military Cross with Bar, the Croix de Guerre and the Victoria Cross.  He was mentioned twice in despatches and wounded 5 times.  His VC citation says that during the attack at Bellenglise and Leharcourt on 19 September 1918 Vann “…rushed up the firing line and with the greatest gallantry led the line forward.  By his prompt action and absolute contempt for danger the whole situation was changed, the men were encouraged and the whole line swept forward.” (The War List of Jesus College Cambridge 1914 - 1918)

Less than a month later he was killed, leading another attack at Ramicourt. He had recently been married to Doris Beck on 27 December 1917 and she gave birth to their son Geoffrey on 2 June 1919. (Jesus College Cambridge, Keeper of the Records book 1901-1920)