Bernard William Pigg came up to Cambridge in 1907 after attending Tonbridge School in Kent. 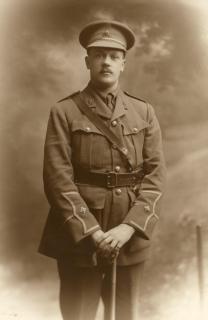 He followed his brother Charles Herbert Pigg (1904). Bernard was an all-round sportsman while at Jesus, he was goalkeeper for the “soccer” team, a cricketer and a keen golfer on the edge of the ‘Varsity team.

As a cricketer he played for the College, the Crusaders, Cambridgeshire County Cricket Club and the Incogniti Cricket Club "the third oldest wandering cricket club", founded in 1851. His College averages are sadly missing but he is recorded in the Jesus College Society Annual Report 1909 as scoring three centuries against Elstow School, Trinity and Queens’ (p33).

There are several references to his sporting prowess in the student magazine, Chanticlere. As goalkeeper for the College team he is described in the Lent Term 1909 edition as “the best of a moderate lot; good with shots in the air, but weak with ground shots” (p60). In the Lent edition of the magazine in 1910 it is remarked that he has “improved considerably on last season’s form”.

He gained his BA in 1910, having studied Natural Sciences, and after a brief visit to Argentina joined the Baltic Exchange.

He enlisted in the ranks of the Honourable Artillery Company at the outbreak of the war and left for the front in September 1914, but was invalided home in December of the same year with frostbite. When he had recovered he received a commission with the Worcestershires and returned to the front in July 1915 (Jesus College Society Annual Report 1917, p32).

He was killed in action at La Boiselle. A local Cambridge newspaper dedicated a column to him, detailing the precise nature of his death and letters from his fellow officers. His Captain wrote “Your son was the only officer who came out with me last year left, and I feel his loss very deeply. He was a good officer and companion” (This newspaper cutting comes from the Head Porter’s scrapbook, held in College).