Bernard Henry Holloway came to Jesus from the Leys School in Cambridge, where he excelled at rugby, cricket and lacrosse. 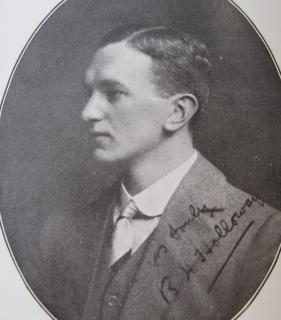 Known as “Babe”, mainly because of “a complexion which would have created the reputation of any face cream on the market” Bernard Holloway was a popular figure at the College. His Cock of the Roost profile, written for Chanticlere in 1910, remarks that “To his contemporaries he will be one of the most delightful memories of these golden years”

At Cambridge he continued his rugby career, playing mostly at half back, where he was described as a “tower of strength to the side” and later at centre three-quarters, where he was less comfortable.

He obtained blues for rugby in 1907 and 1909. In the latter year he took a blow to the head and was stunned early in the match. A lifelong teetotaller, he imagined the sensation must have been comparable to the feeling of a drunken man!

He narrowly missed a blue for cricket, where he was a dashing batsman. “His late cut is obviously hereditary; not a thing cultivated in one generation”. After leaving Jesus he played cricket for Sussex and toured the West Indies with MCC. He was also a lacrosse blue and led a revival of the sport at Jesus.

He was a sociable man and was a member of most of the College societies, in spite of preferring “ginger beer to the more heady wines.” It seems that his refusal to drink or smoke caused some puzzlement and concern to his fellow students and the fact that he stuck with the teetotalism to the end of his life was noted in his obituary.

On the outbreak of war he was commissioned as a Lieutenant in 9th Battalion, Royal Sussex Regiment and quickly rose to the rank of Captain. He was killed in action at the Battle of Loos and is commemorated on the Loos Memorial, Pas de Calais (Panel 69-73)