Austen Campbell Dent came up to Cambridge from Bootham School, York in October 1910. 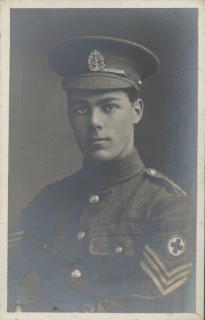 The Bootham School upholds a Quaker Ethos, but it is noted that Dent was “not a Friend”. He was the son of Joseph Mallaby Dent, the publisher who founded the Everyman’s Library series.

"One of the best hockey goalkeepers we have had – alert, fearless and resourceful”

His sport of choice at Jesus was hockey, which was seemingly a popular choice as Chanticlere records that there were 51 men in College wanting to play in Lent Term 1912, Dent’s second year.

Dent’s position was that of goalkeeper and he made the second XI in 1912, and was declared “a great success”. In his third year he joined the first XI and although he started the season off with some uncertainty his confidence grew and he played the second half very well.

At the time of writing the report for Chanticlere in Lent Term 1913 the only two teams that had not lost were Jesus and Pembroke.

It seems that the hockey season was curtailed for some reason but as the Annual Report records, the team “suffered no defeats and had beaten every other team at least once”, they also gained a decisive victory away at the favourites, Pembroke.

He was described as “one of the best hockey goalkeepers we have had – alert, fearless and resourceful” in his obituary in the Jesus College Society Annual Report, 1916.

Fatally wounded on his birthday

Dent went into the family business after achieving his BA in 1913 and when war broke out in 1914 he joined the East Anglian Field Ambulance as a private of the Royal Army Medical Corps. After receiving training, he was promoted to Sergeant before being sent to the Dardanelles.

On his 23rd birthday, 19 July 1915, he was severely wounded while tending to other wounded soldiers and died the following day.