'We found love at Jesus'

At Jesus College, we see many relationships blossom that will stand the test of time.

Research suggests more than a fifth of British university students meet their life partner at university - and at Jesus College it's no different. Many couples met as students here and it's wonderful when, years later, they exchange their vows in College or return with their young family.

This year, for Valentine’s Day, we speak to just a few members of our community who met at Jesus and take a trip down memory lane to when they were love’s young dream. 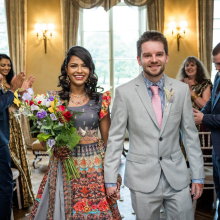 Harshnira and Luke met early on in their first year and got together in 2013, just before graduation. They married on August 9, 2021, at Hampton Court House – although Harshnira says had Hall been available it would have been their first choice.

Harshnira said: “We actually don't remember the exact moment of our meeting at Jesus, but we think it was probably at a Freshers' event in Oct 2010, in Caf in Freshers' Week or at Jesus badminton which we both attended without fail every Thursday throughout our time at Jesus.” 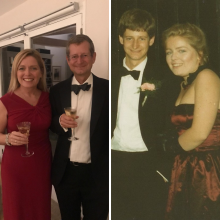 Andy and Stephanie, both studied Geography at Jesus, and found love in 1987. They have been married for 27 years and were able to dig out a fantastic photograph of themselves on the way to a ball.

Stephanie recalled when they first met: “We sat opposite each other at the Freshers Dinner as he was a first year rep.” 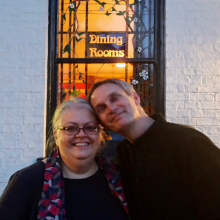 Naomi and Ally Davies met the week after Freshers' Week. They lived on the same staircase and will celebrate 35 years together this year.

Ally now works for Cambridge OCR and Naomi is a talented artist, whose work you may have spotted on College memorabilia including our winter and summer greetings cards and tea towels. 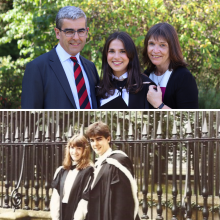 Andrea and Steve both read Natural Sciences at Jesus College.

Andrea said: "We went to our first College May Ball together in 1985 and have been together ever since.”

They have three children Laura, Sophie and Matthew, two of whom have gone on to study Chemistry like their parents.

And they also have a second family tale of love at Jesus to tell.  Andrea’s brother Nick Weaver (1989) met his wife Ruth Parr (1990) when they were both students at Jesus. 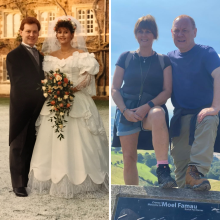 Kevin recalled: “Our wedding took place on a beautiful frosty, winter’s day. In the Chapel, the Choir sang a beautiful mix of wedding hymns and Christmas carols. A string quartet (found busking in Cambridge) accompanied dinner in the Hall where two top tables were necessary to accommodate all the visiting guests who stayed the weekend in the College.

“Our daughter Annabelle was christened in the Chapel 1994. We celebrated our 30th anniversary at Christmas and although Tracey’s Mum June sadly passed in 2017 we still visit Cambridge regularly from our home in Surrey.” 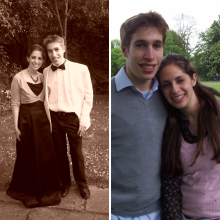 Miriam and Harris studied Theology at Jesus. They met as applicants in sixth form, having been introduced by a mutual friend.

“At first, I saw Harris as a rival for a place, but somehow we both got on and soon liked each other too much for competition,” Miriam said.

The couple got engaged in their third year and Dr Margie Tolstoy presented them with flowers in her lecture.

Miriam added: “We have amazing memories of our time in Cambridge and maintain relationships with friends, faculty and staff. We've been married for 13 years now and have two little boys, who we brought to Cambridge for the day recently. I'm not sure they got why we were so dewey-eyed, but they loved punting.” 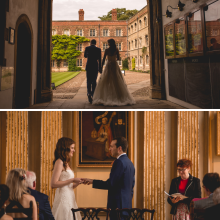 Lucie and Tim met on day two of Freshers' Week in the infamous 'Welfare' (sexual health) talk in Hall.

They married, standing in much the same spot that they met 10 years later.

Lucie, who was JCSU President 2008-2009, added: “Jesus College was (and is) really important to us both and our relationship. When we got engaged a few years later, we deliberated over where to get married. When we realised that we could in fact get married back at Jesus, in Hall - there was no other option.”