New book on the Sacred Home in Renaissance Italy

College Fellow Professor Mary Laven (1989) is the co-author of a new study of domestic life, The Sacred Home in Renaissance Italy, with Cambridge colleagues Abigail Brundin and Deborah Howard.

Measuring 20cm across and painted on a rough wooden board, this startling image records an earthquake in central Italy in the sixteenth century. At the centre of the scene is depicted a nuclear family – mother, father and four neatly dressed children – kneeling in prayer. Around them, neighbours can be seen crying out for help and waving their hands in terror as their houses collapse beneath them. In the top left-hand corner hovers the local saint, Nicholas of Tolentino, who responds to the appeals of the praying family. The painting was commissioned as a gift from the Viadana family to give thanks for their miraculous salvation; their name is written in capitals across the front of their house. But it is also a gift for the social historian: an evocative document of a community in crisis, rendered all the more immediate thanks to its unpolished material form.

Renaissance Italy does not always yield up its secrets so readily to the social historian. Indeed, the way in which we define ‘the Renaissance’ tends to privilege high politics and high culture – palaces, princes, oil paintings and learned manuscripts, preferably written in Latin and Greek. The Sacred Home in Renaissance Italy is unusual in that it engages squarely with the exceptional creativity of the period while adopting a social historical perspective. The book explores the place of piety in Italian Renaissance households across the fifteenth and sixteenth centuries. It is the result of four years of collaborative research, with three PIs, three postdocs and three PhD students, spread across three disciplines, the whole thing funded by a European Research Council Synergy Grant. 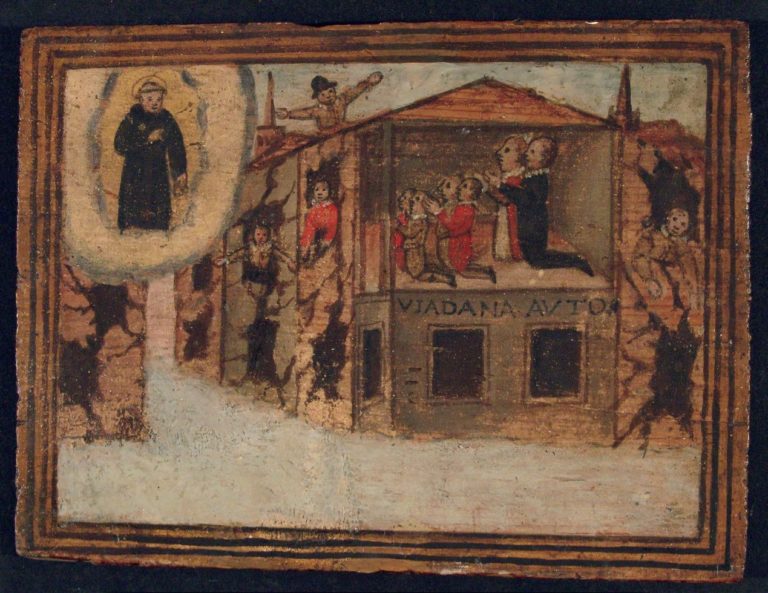 At the outset, we argued that we needed people, time and money to ensure that our study did not simply replicate the usual contours of research into Renaissance Italy. We were determined to resist the allure of the golden triangle of Venice, Florence and Rome and to conduct fieldwork in the less known regions of the Italian peninsula. At the same time, we side-stepped the grand palaces of the nobility, even though we knew that we would find here evidence of family chapels and devotional art, in order to investigate the homes of artisans and shopkeepers. This led us to trawl the archives in search of household inventories, which might shed light on the day-to-day devotional experiences of ordinary people. Rosaries, little crosses, figurines of saints or printed images of the Madonna were commonly found in even the poorest homes.

To confirm our thesis, Alessia Meneghin, postdoctoral researcher on our project, spent months combing the records of the Monti di Pietà – charitable pawn banks to which Renaissance Italians turned at moments of financial distress. Here, among the registers of pawned goods, are repeated references to devotional items (crosses, pendants with religious imagery, scraps of folded paper bearing the texts of prayers) often strung together or wrapped in a handkerchief with other amuletic items (wolves’ teeth or coral charms). The perceived value of these devotional packages is suggested by the way in which people returned to the Monti months or even years after they had taken out a loan in order to redeem their possessions.

While archival records have been central to our research, The Sacred Home is also based on the evidence of books, buildings, art and objects; this interdisciplinary perspective allows a wide-angle reconsideration of the Renaissance. Local presses churned out devotional literature that was specifically tailored to community concerns. Books of miracles fed a taste for narrative and helped to shape Catholic identities before and after the Reformation. Devotional paintings were not selected on ‘purely aesthetic grounds’ – as it was once possible for historians of art to claim – but were often prized because they were old and battered, freighted with religious experiences and family memories. Putting together a picture of everyday life, for which no institutional archival repositories exist, has required a range of expertise for which collaborative research was the obvious model. At the end of the project, we are at once delighted by the results and sad at the dispersal of our new family of researchers.

Mary Laven is a College Fellow and a Professor of Early Modern History in the History Faculty. The opinions expressed are those of the author. This article was originally published on the Social History Society website.