Teaming up with The World Relay, Ric Casale (1986) is organising an event called ‘Running Out of Time’. It’s the longest non-stop relay ever attempted and a world record. The mass participation run covers 7700 km and 18 countries from Scotland to COP27 in Egypt.

The relay symbolises the unity, strength of purpose and action that its organisers wish to see from the delegates at the global climate summit in November. Inside the relay baton itself are video messages from young people, that will be played at the event’s closing ceremony in Sharm El-Sheik.

Running Out of Time will showcase hundreds of inspiring people and projects addressing the climate crisis today, highlighting the power of collective, local climate action. “Our aim is much further and much nearer than the destination in Egypt. We are imagining and creating something large enough and local enough that everyone feels they can join in,” said Casale.

The event will also incorporate a Global Schools Action Day and Virtual Relay Day so more people can take part, with at least 250,000 participants expected.

For Casale and the UK climate action charity he co-founded, this relay is about boosting a community-powered response to the crisis. “People who are worried about the impact of climate change – which is three-quarters of the population in the UK – are asking, ‘what can I do?’ and too often receive answers that are clichéd, consumerist and incomplete. Instead, we want better answers to the question, ‘what can we do?’ We are here, we are many, and we are important to this moment,” he said.

For more information, please visit www.running-out-of-time.com or follow them on social media: 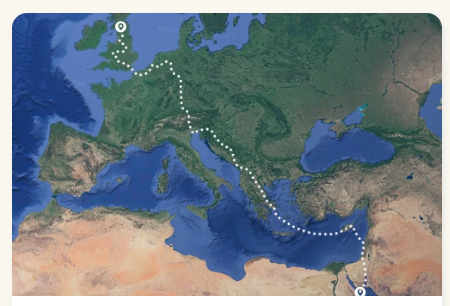