Natural Sciences Fellow Dr Albert Chen has co-authored a scientific paper about a bird-like dinosaur called Ichthyornis that provides unprecedented insight into when and how distinctive adaptations in the modern bird skeleton evolved.

“Ichthyornis would have looked a lot like a modern bird in most respects, except for the fact that it had teeth [...] It was about the same size as a small gull and may have behaved similarly, catching fish while flying over the ocean. (There weren't any humans to steal chips from when it lived.)” – Dr Albert Chen

Ichthyornis lived about 86.5–83 million years ago in the late Cretaceous Period of western North America, a region that would have been covered by an inland sea at the time.

Fossils of Ichthyornis have been known since the 1870s, but the new study involved the examination of forty newly discovered and previously undescribed specimens, which provided the researchers the opportunity to describe and learn about its anatomy in much greater detail than had been previously understood.

Ichthyornis is one of the closest known relatives to modern birds in the fossil record, so the researchers hope that this extensive work will help others in their field figure out when and how distinctive adaptations in the modern bird skeleton evolved. 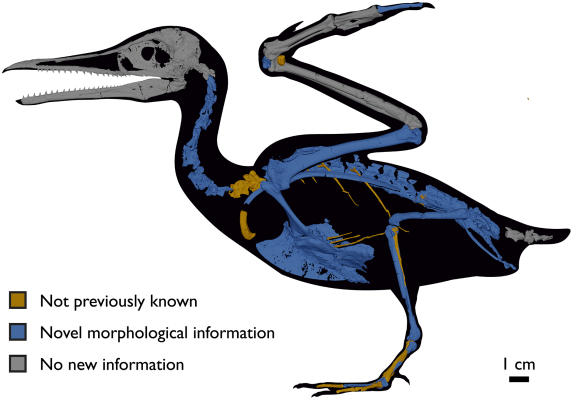