How do you move a bee colony?

Some strange boxes appeared on scaffolding in Second Court over the summer, which turned out to be a removals van for a colony of bees! Architect and apiarist Tim Wylie told us how it was done.

A bee colony took up residence in Second Court in 2018, but scaffolding to repair the stonework on the tower meant the colony needed to be moved to a new location.

The colony had been using an overflow pipe to get into the building to their nest in the roof cavity. By coincidence, librarian Rhona Watson was told about the swarm arriving. She wrote in the Wildlife blog: 'A bee swarm came towards College on the weekend of the 19/20th May and headed across the playing fields towards Second Court.  The queen and her bees found a hole in the walls of M Staircase facing into the court.  You could see honey bees flying in and out of the hole if you looked up towards the top of the building.’ 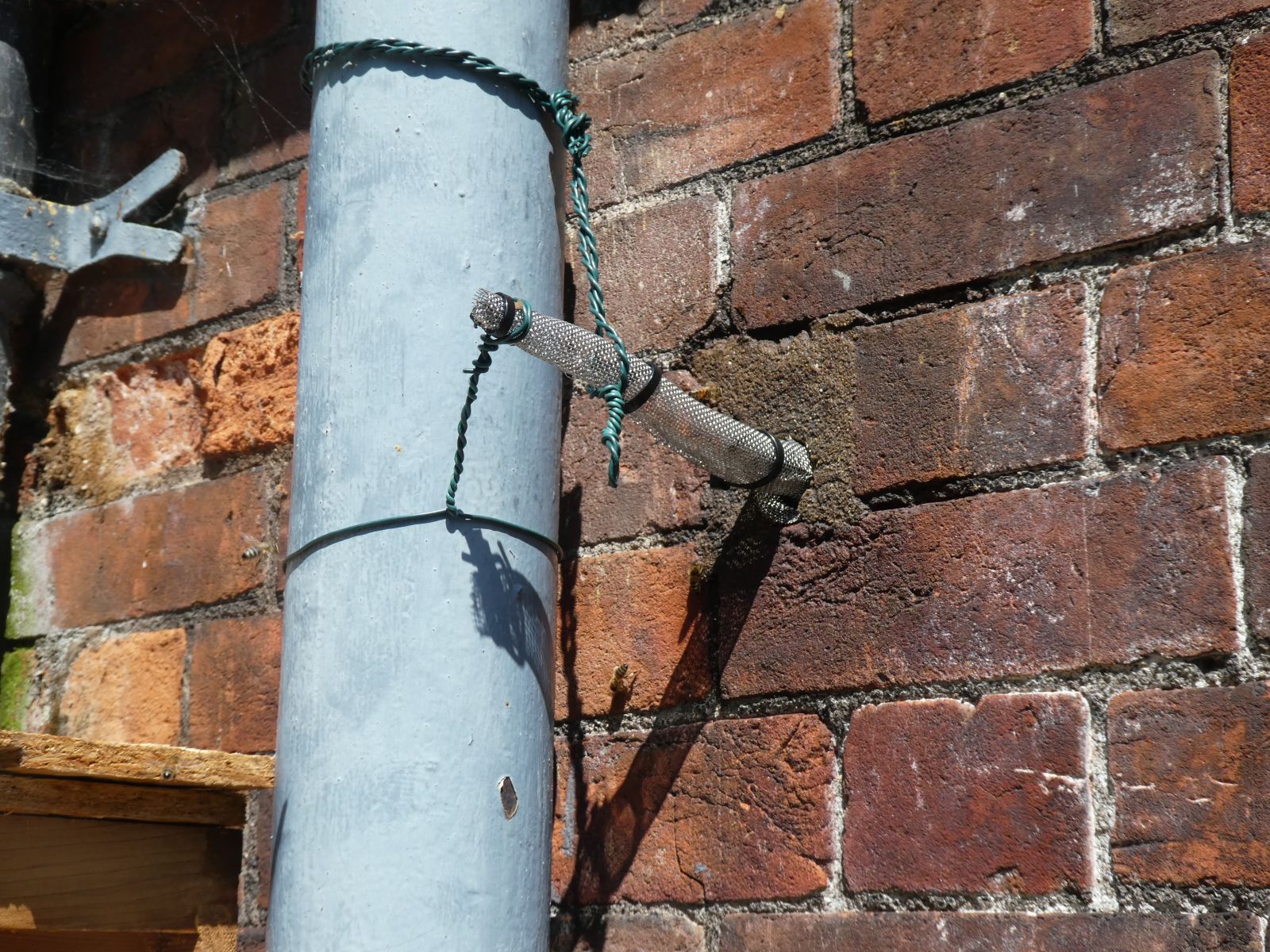 Having provided a home for the colony for two years, we wanted to make sure our Jesuan bees were transferred safely to a new home. Just like moving your own home, moving a bee colony is costly and time-consuming. A colony will not move once it is set up, if the nest is destroyed the bees will not find a new home. To avoid this, we called in Tim Wylie, an architect and apiarist.

Tim placed a second colony of bees in a small hive next to the hole in the brickwork (the entrance to the old nest). A mesh tube was inserted in the hole so the bees could exit the old hive. The clever part is that when the bees returned, they were looking for a hole in the wall, but didn't know to go through the mesh tube to get in. They therefore joined the new hive. The bees from the two colonies would not fight because Tim chose a new colony with lots of young, but few forager, bees.

The old queen was still in the old nest, laying lots of eggs. As she lost her forager bees, the remaining colony used up the stored nectar/honey to feed the new grubs. When a tipping point was reached, the old queen and what was left of her workers left the nest. 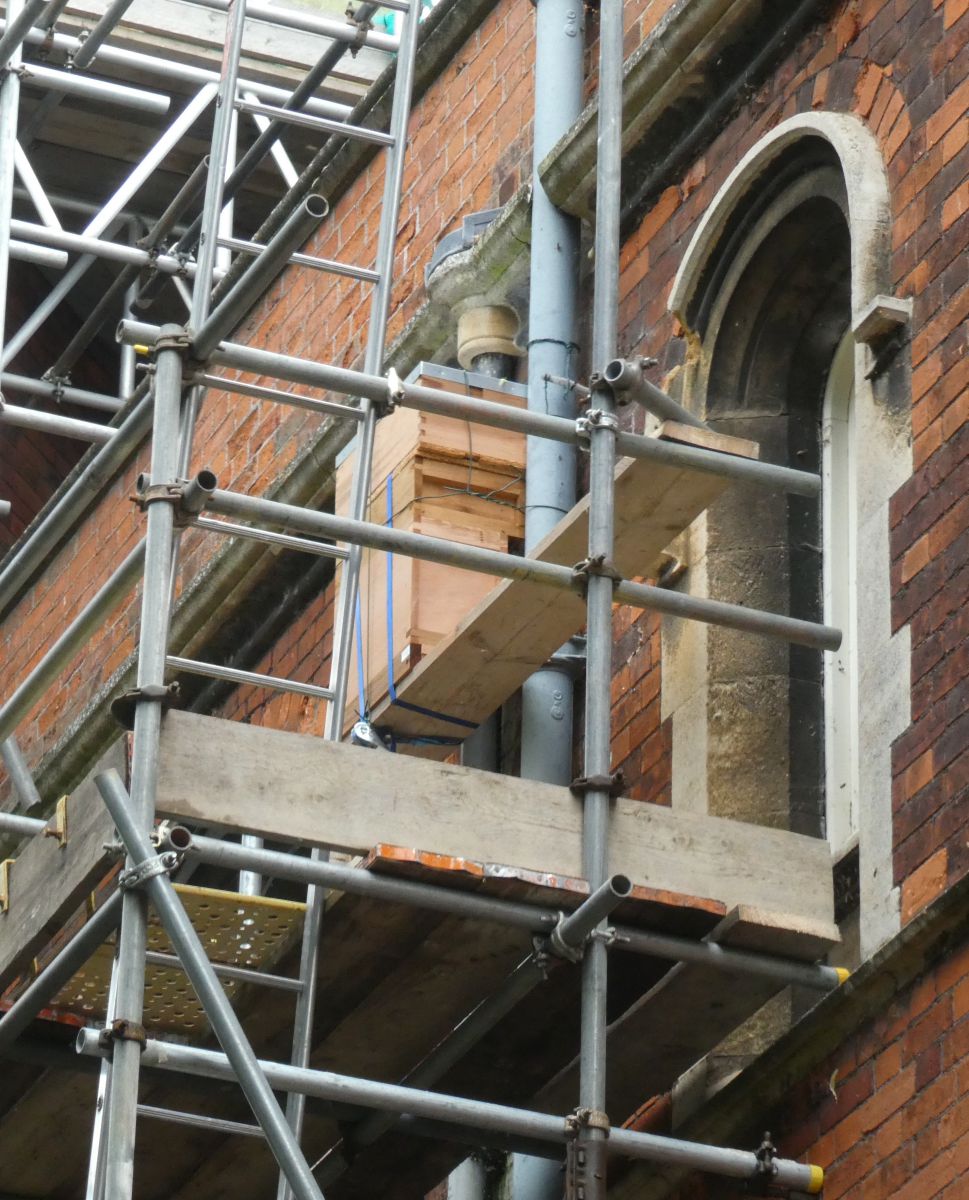 After the old queen left, the new colony was left in place for a few weeks so it could be checked for the disease 'European foulbrood', a known problem in Cambridge. The combined colony was then taken in stages to its new home in St Neots.

This technique is called 'trapping out'. It doesn't always work, but went well, with the new colony swelling in numbers. The bees were moved on 23rd August and the surrogate colony taken offsite.  The brickwork was opened up and wax comb removed before the brickwork was reinstated.  The lime mortar was even tinted so the area looks just as it did before the bees took up residence.

Our Jesuan bees were Honey bees, Apis mellifera. Honey bees come in a variety of shades: the new hive is a dark native brood, the old colony is a ‘reasonably’ dark bee. Honey bees have to contend with many diseases, intensive farming practices, and garden and agricultural chemicals. Bee numbers are declining, as are most pollinators and other insects, so we are proud to have looked after our bee colony by making sure it has a safe new home.