The College is deeply saddened by the death of Her Majesty The Queen and extends its heartfelt sympathies to the Royal Family.

The Queen, succeeded the throne in 1952, aged 25, and reigned for more than 70 years – longer than any other monarch in British history – and was much-loved and admired for her unstinting devotion to a life of public service.

Her Majesty had an extraordinary ability to connect with everyone. Many Fellows, alumni and former members of staff will remember when The Queen visited the College. The first was a private visit in 1984 while her son, The Earl of Wessex, Prince Edward (1983) was a first-year undergraduate reading History.

Her Majesty had opened the Grafton Shopping Centre in the morning and lunched at Emmanuel College to mark its quatercentenary. The Queen arrived at Jesus College, accompanied by His Royal Highness The Duke of Edinburgh, who was the Chancellor of the University of Cambridge at the time. The royal party were greeted by the then Master, Sir Alan Cottrell and his wife Lady Jean, Sir Peter Proby, then Lord Lieutenant of Cambridgeshire and Prince Edward.

The Queen visited the Chapel where the College's Annual Report of that year notes Her Majesty "spent rather more time seeing the Chapel and the inner Chapel than had been anticipated."

The report continues: "The royal party then went by way of the Fellows' entrance to the Hall to meet the assembled Fellows and their spouses, Senior College Staff, and such junior graduate and undergraduate members as held College Offices.... Both the Queen and Prince Philip managed to have a word with everybody.

"The proceedings in Hall completed, the Queen, Prince Philip and the accompanying party then went out to First Court and thence to North Court. The way through both Courts was lined by undergraduates, College staff and by members of the families of Fellows and staff. Again, both the Queen and the Chancellor managed to have a word of greeting with many as they made their way through the Courts."

The Queen and Prince Philip concluded their visit in North Court W where Prince Edward was staying.

The Annual Report notes that “…at the entrance to the staircase the Queen met and chatted with Mrs Warren, his bedmaker. The Queen and Prince Philip then went to Prince Edward’s rooms to have tea and a cake from Fitzbillies.” Meanwhile, the rest of the College community enjoyed tea and cream buns on the hockey field.

Her Majesty returned to College 12 years later in 1996 when she opened the Quincentenary Library, once again accompanied by Prince Philip in his role as Chancellor of the University of Cambridge.

The Master of the College at the time, Professor Lord Colin Renfrew, wrote a detailed account of the day in the College’s Annual Report and remarked that The Queen “wore scarlet which matched the red of the College’s red-and-black.”

Having been received by the Master, Lady Renfrew and James Crowden, the Lord Lieutenant of Cambridgeshire, the royal party met with the Bishop of Ely, the Right Reverend Stephen Sykes, as well as the former Master, Sir Alan Cottrell, Lady Cottrell, the President Dr McKie as well as student and staff representatives.

Lord Renfrew noted: “Her Majesty, preceded by the Head Porter, then negotiated the red carpet covering the cobbles of First Court and was greeted by the graduate students of the College lining the path.”

The Queen also met Barry Flanagan, sculptor of the bronze horse in First Court where he was “challenged on some finer points of equine anatomy” by the Duke of Edinburgh.

The royal party visited the Chapel to meet Fellows of the College and a number of College officers. From there they passed through Chapel Court which was lined with students and staff.

Lord Renfrew wrote: “As the Queen appeared, clapping swelled into cheering and even flag-waving; the Queen evidently appreciated the warmth of the welcome, and after a brief moment… relaxed visibly and chatted with a number of students and with staff from the kitchens.”

Once inside the Library, the royal party were shown the original College Charter of 1496 and signed the visitors’ book and two photo portraits. They were also shown an incunabulum from the Old Library by Emeritus Fellow, Mr Peter Glazebrook.

Her Majesty then processed to the marquee where the then Master gave a short address. Recalling the words of King James I that: “Were he to choose he would pray at King’s, dine at Trinity and study and sleep at Jesus” he noted “the Queen appeared to approve”.

The Queen accepted the gift of the Quincentenary Commemorative Plate and unveiled the commemorative stone which now sits over the library’s entrance passage. The account states that the Queen and the Duke of Edinburgh then met “as many as possible” Fellows, students, staff, Honorary Fellows and guests.

Lord Renfrew wrote: “There was a genuine feeling of informal enjoyment in the marquee as well as a sense of occasion. The Queen had a number of lively conversations and like the Chancellor, she was in a cheerful mood, seemed in no hurry to leave until reminded by the Lady in Waiting and the Equerry that it was time to do so.”

He continued: “The royal reception was open to the entire College and it seemed that virtually the entire College accepted the invitation. Certainly, many students subsequently expressed the view that this had been A Day to Remember. And the Queen, in the letter of thanks received a few days later, remarked that she had particularly welcomed the opportunity of meeting and talking with so many students of the College.”

The College flag will fly at half-mast today, at full mast when the new Sovereign, King Charles III, is proclaimed in Cambridge and at half-mast again until the day of The Queen's funeral. 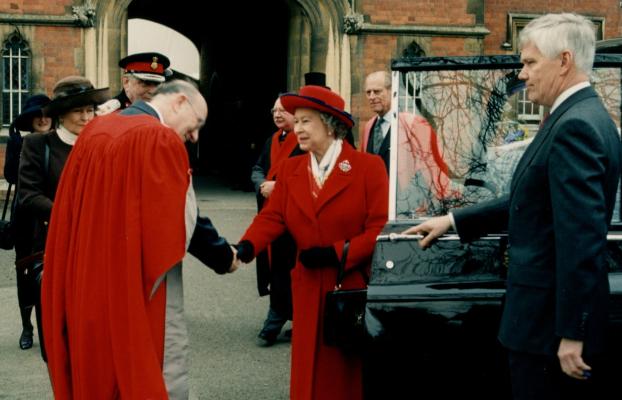 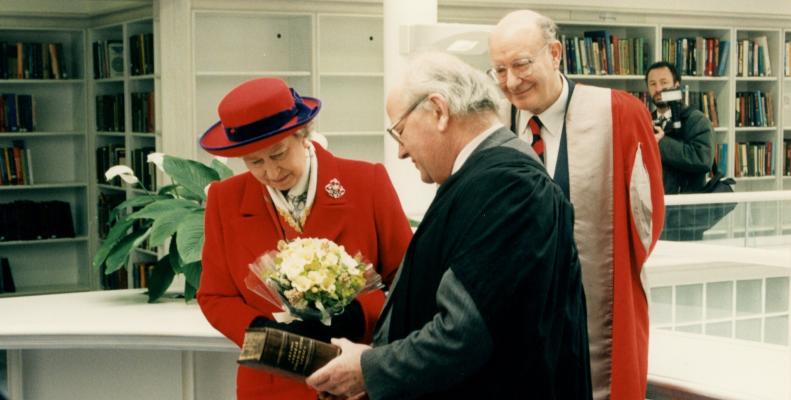 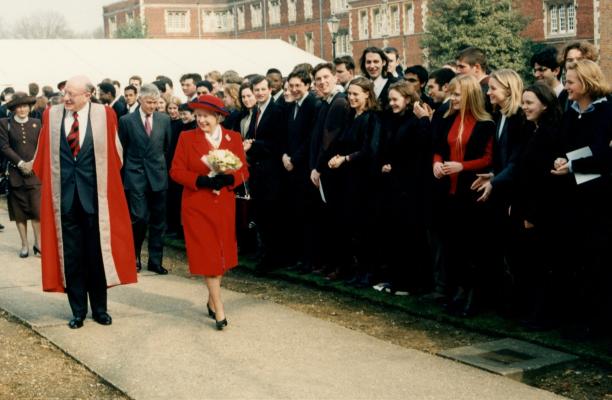