The new Film at Jesus society ran a competition in November asking students to tell a story in one-second clips.

The competition, called 'The One Second A Day Challenge', was judged by The Master and screenwriter James McCarthy.

We spoke to Film at Jesus co-founder Anja Diel (2019) to find out more:

When and why was Film at Jesus founded?

Film at Jesus was founded by Dr Hjördis Becker-Lindenthal and I when Hjördis was running zoom discussions on arthouse films (by Robert Bresson and Krzysztof Kieślowski) over the summer. I attended a few of these discussions when she asked me if I wanted to collaborate with her in setting up an official film society at Jesus. Hjördis wanted to do this to make people feel more connected in the COVID-19 lockdown, and my reasons were similar but mainly because I wanted those who are into film to have a community that they can meet each other through and more opportunities to find like-minded people. Later, when we were on a zoom call with the Master organising our plan for Michaelmas term, we met Bruno Buckley, who introduced the film screening element of the club. Bruno and I ran weekly film screenings at the Frankopan Hall, of films by Werner Herzog and Alfred Hitchcock.

We also put on talks about the films before the screenings. Unfortunately, these had to be put on hold because of the lockdown in Michaelmas Term, but we plan on continuing them when we can. Over Michaelmas term Film at Jesus has run friendly, informal zoom discussions that are also a space for intellectual/artistic analysis of films, and have hosted the One-Second-A-Day film competition.

What was the idea behind the competition?

James McCarthy and Sonita Alleyne wanted to run a film competition that was easy for students to take part in but would be a good creative outlet - the app 1-Second-A-Day was the perfect medium as it was easy for students to just film one second clips on their phones and at the end of November, they could 'mash' these clips together into a montage.

What were the most surprising/touching/funny moments from the films?

Karris captured a lovely and very authentic snapshot of friendship in her autobiographical film, and her film had a bit of tongue-in-cheek humour about the way that COVID has affected student life, which was a relatable reflection of a lot of students' experiences. Mojola's film was very aesthetically pleasing, portraying Cambridge architecture gorgeously and there was a particularly imaginative transition from the actual buildings to drawn representations of them. Hannah's film was described as having a "sheer joie de vivre" as she depicted a variety of her pets in lush environments in shots that accumulated to create a sense of wonder towards diverse life in nature. Nathan's fictional love story was especially impressive as it was composed beautifully, and depicted heart-warming connections and everyday, subtle but precious human interactions - the judges were particularly impressed with the final shot.

What plans does Film at Jesus have coming up next?

This term we are running another film competition and would encourage as many students to take part as possible. We are also going to continue with the zoom discussions and film screenings if possible, and would like to screen the winning films at the Frankopan Hall when we can.

Too see the winning films and for more information about Film at Jesus please visit their Facebook page here. 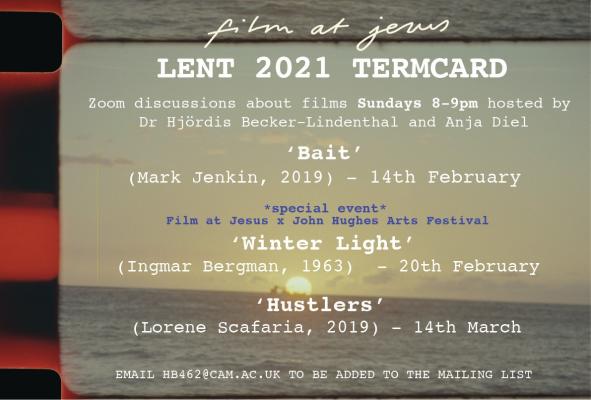