Archive of the month: Pathos, fire and fun

Celebrating Burns' Night started soon after his death and has continued ever since, not least  in recent years by the College and the MCR. Although the College has no direct connection to Burns, there is a ‘glowing review’ of Burns’ works in a letter that makes up part of the Edward Daniel Clarke collection in the College Archives.

Clarke wrote to his friend and contemporary at Jesus, William Otter, on 23rd January 1798, describing the works of Burns or, as he put it, “the Scotch Ploughboy” as “Genuine, native, Wit – originality – pathos – Fire & Fun!”. He also admitted that previously he had “formed an erroneous notion that it (Burns’ poetry) was frivolous”. Unfortunately Burns died in 1796 never to hear of Clarke’s enthusiastic praise of his work. This image from the first page of the letter (ref: PP/Clarke/8) shows Clarke’s comments. 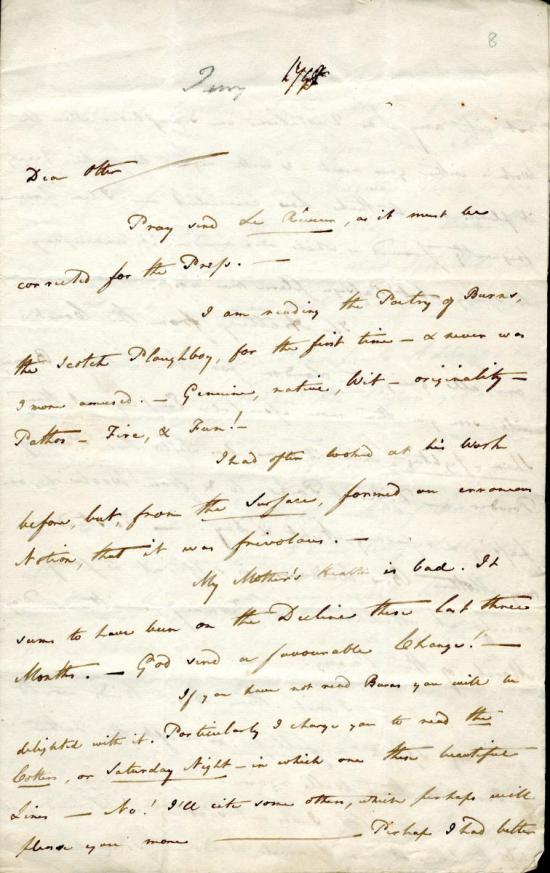 However, in addition to Clarke’s praise of Burns’ works, this letter contains a huge amount of information providing a fascinating insight into Clarke’s personal life and opinions of other members of the College.

In passing, Clarke recalls ships passing his mother’s house on their way to London to restock their ammunition at Woolwich arsenal (in preparation for further conflict during the Napoleonic Wars). He proceeds to describe a shooting excursion he had with a “little brown spaniel” and that in the space of two hours he managed to acquire “three snipes, a woodcock, a hare, three partridges and three pheasants”.

He followed this with a request for the address of John Plampin who was at Jesus at the same time as himself and Otter. It is likely Clarke and Otter knew Plampin through his younger brother, George, who was a direct contemporary of theirs, who migrated to Jesus from Caius in 1784, and who died in 1795.

Of most interest, however, is an extremely detailed and derogatory description Clarke makes about another College member, Thomas Castley. In his memoirs of Cambridge that were published in 1854, Henry Gunning, recalls Castley as “a man of most unprepossessing appearance [who] had an extraordinary obliquity of vision [and whose] teeth were remarkably long, and they were completely closed when speaking; his voice, which was naturally harsh and guttural, had a very singular effect”. Furthermore, Gunning suggests the unfortunate Castley was allocated the rhyming nickname ‘ghastly’.

Clarke matches this description, suggesting Otter should present a napkin to Castley in Hall, saying it was an essay he had “lately published on the efficacy of physiognomical unction – it may perhaps induce him to wipe his chin – which will deprive of you of a looking glass”. Clarke proceeds to write that he has seen Otter “indulge a little innocent vanity by the contemplation of your whiskers and cravat in Castley’s shining visage”.

However, from these rather mean descriptions of Castley, we do not get much indication of his character. Gunning’s reminiscences do, however, state that Castley made it publicly known that he was only interested in marrying for money and made that quite obvious to those who knew him. Unfortunately, for him, after various failed attempts to woo heiresses, he eventually married his female servant who was apparently of ‘unimpeachable character’ and took on the College living at Cavendish in Suffolk.

The delightful illustration supplied by Clarke at the bottom of the letter shows a scene as he imagined it at high table, showing Castley busily eating, a profile of Otter gesturing towards him and a rather poor sketch of someone called Bayley, likely Thomas Bayley who was admitted as a student in 1777 and was a Fellow from 1783 – 1801. The biblical quote above the picture refers to Castley as Moses and reads “And all the People murmured thereat exceedingly but Moses occupied himself in the Meat offering, & needed not the Murmurs, which they murmured against him”.

This letter by Clarke is just one of numerous surviving in the College Archives and touches on just a couple of aspects of his interesting life. Although admitted to Jesus on 20th October 1785 and made a Fellow in 1795, he was not considered to have been the most academically minded individual. Indeed Otter, who later wrote a biography of Clarke, suggested he did not apply himself to his undergraduate studies properly.

Nonetheless, Clarke took great interest in numerous subjects, travelled a great deal and became a collector of antiquities, interesting objects and unusual items.  Amongst his acquisitions were seeds he gathered from a plane tree in Thermopylae, one of which was nurtured to a seedling and planted in the Fellows Garden in 1802. Indeed it is still there and 200th birthday celebrations were held for the tree in 2002. He later published his travel memoirs which went into several editions.

When he finally returned from his travelling, Clarke was ordained, given the College living in Harlton, made Professor of Mineralogy and, in 1817, made the University Librarian. Following a period of ill health, he died in 1822 aged 53 in London and was buried in the College chapel with a memorial plaque to him being displayed nearby. 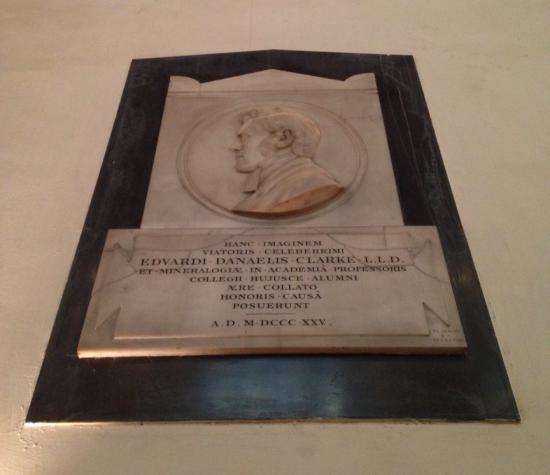