Archive of the month: "a notorious character"

Since 2018, the Archives has run a volunteering programme which has involved cataloguing the thousands of original receipts that were submitted to the College between the mid 18th century and mid 20th century for goods and services provided to the College.

One such receipt catalogued recently, is a bill dated 5th July 1827 from the then College solicitors, Pemberton, Fiske and Hayward. The first line of the receipt, referring to events in 1826, mentions the College giving the solicitors instructions to proceed with the prosecution of “William Groom…at the next Town Session for robbing Mr. Yule’s Room”. The image below shows this bill. 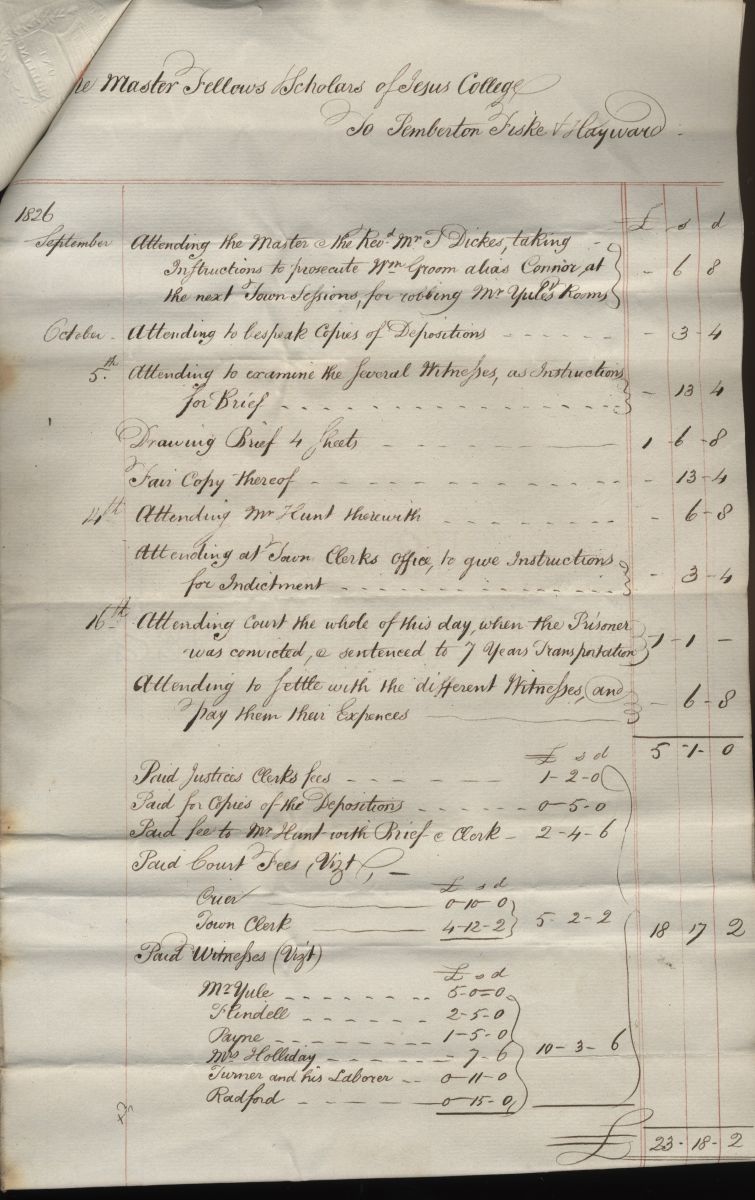 As can be seen, the majority of payments relate specifically to costs incurred by the solicitors, including, on the 16th October 1826, “attending court the whole of this day, when the prisoner was convicted, and sentenced to 7 years transportation”. It can also be seen that the witnesses at the trial were paid their travel expenses getting to court, some of whom are known to have been working for the College at the time including Radford (the College rat catcher) and Turner (the College bricklayer).

However, it was too tempting not to investigate the unanswered questions thrown up by the bill including who were the people involved, what was stolen and what happened to Groom following his conviction.

Mr Yule proved to be John Carslake Duncan Yule who was admitted to the College on 2nd May 1823, having previously been at Christchurch, Oxford. Yule, who hailed from Devon, was the son of Captain John Yule who was a well known figure during the Napoleonic Wars and, as a lieutenant on board HMS Victory during the Battle of Trafalgar, was depicted in Arthur William Devis’ painting The Death of Nelson. It is not clear which rooms Yule occupied in College, but as a ‘pensioner’ (ie a full fee paying student) from a relatively wealthy family, he could have expected to have occupied some of the better student accommodation available in College, perhaps even the new rooms on K Staircase which had been completed in 1822.

No other records in the College Archives suggest exactly when or how the theft took place, but it was extremely well reported in the Cambridge Chronicle and Journal. A report from the edition of the newspaper dated 25th August 1826 notes that “William Groom alias Connor…charged with feloniously stealing a silver half-pint pot, six silver tea-spoons, and a pair of sheets, from the rooms of Mr. Yule, of Jesus College. The prisoner stands further charge with robbing one set of rooms at King’s College, two sets of rooms at Catharine Hall and one set of rooms at Caius College”. William’s wife, Sarah, is also noted as having stolen a silver half-pint pot from Yule, although she was later found innocent of this having been considered to have been forced by her husband to take the pot. The 1st September 1826 edition of the Chronicle further reports that Martha Grubb, a bedmaker at St. Catharine’s, was also a victim of Groom having been deprived of a sheet and ‘other articles’.

From the Cambridge Town Quarter Session records that survive in the County Record Office, we learn that William Grendon Heathman (a student at St. Catharine’s) pursued a further prosecution against Groom for “feloniously stealing, taking and carrying away two pair of cotton stockings of the value of 1 shilling”. Indeed the same records show that the sheets stolen from Martha Grubb are valued at ten shillings whilst the silver mugs and teaspoons stolen from Yule were valued at 40 shillings and 15 shillings respectively.

Groom was found guilty of the theft and as also shown in the bill from the College solicitors, was sentenced to “be transported for the term of 7 years to such a place or places beyond the seas as his Majesty by and with the advice of his Privy Council shall please to direct”. The place beyond the seas proved to be Van Diemen’s Land, now Tasmania.

However, rather than this being the end to the matter, a further newspaper report from the Cambridge Chronicle dated 20th October 1826 details that after being committed to Cambridge gaol whilst awaiting transportation, Groom escaped. This led to a detailed description of him being provided alongside an advertised reward of five guineas for anyone who might capture him. “Aged 30 years, 5 feet 8½ inches high, born in Queen’s County, Ireland (modern day County Laois), dark brown hair, grey eyes, dark eyebrows and lashes, common mouth, rather fresh complexion, round visage, nose had been broken, by trade a mariner, (he calls himself a tailor,) scar on fore finger of left hand, and on little finger of left hand.” We also learn from this same report that in addition to the alias Connor which he is known to have used, he also used a further alias, Lacey.

The last report from the Cambridge Chronicle concerning the case is from the 3rd November 1826 edition and records how Groom was caught. “On Saturday last as Mr. Payne, keeper of the town gaol, was on his way to Portsmouth [with other convicted prisoners], he met with William Groom alias Connor (who escaped from prison on the 18th ult.) in Shoreditch, in consequence of information which had been received, and Mr. P. being in a disguised dress, Groom made a desperate resistance, but he was secured, and taken to Newgate, from whence he was conveyed to Gosport, to undergo his sentence of transportation”.

Transportation hulk registers from the Home Office record series held at the National Archives in Kew, list Groom as having been put on the ship Governor Ready, (built in Canada in 1826, sank 1829) along with another 189 prisoners, a list of which can be accessed here. A description of life upon the transportation hulk ship Retribution (which Groom is also suggested to have spent time on) is given by James Hardy Vaux who experienced life there and can be found in the downloads below. 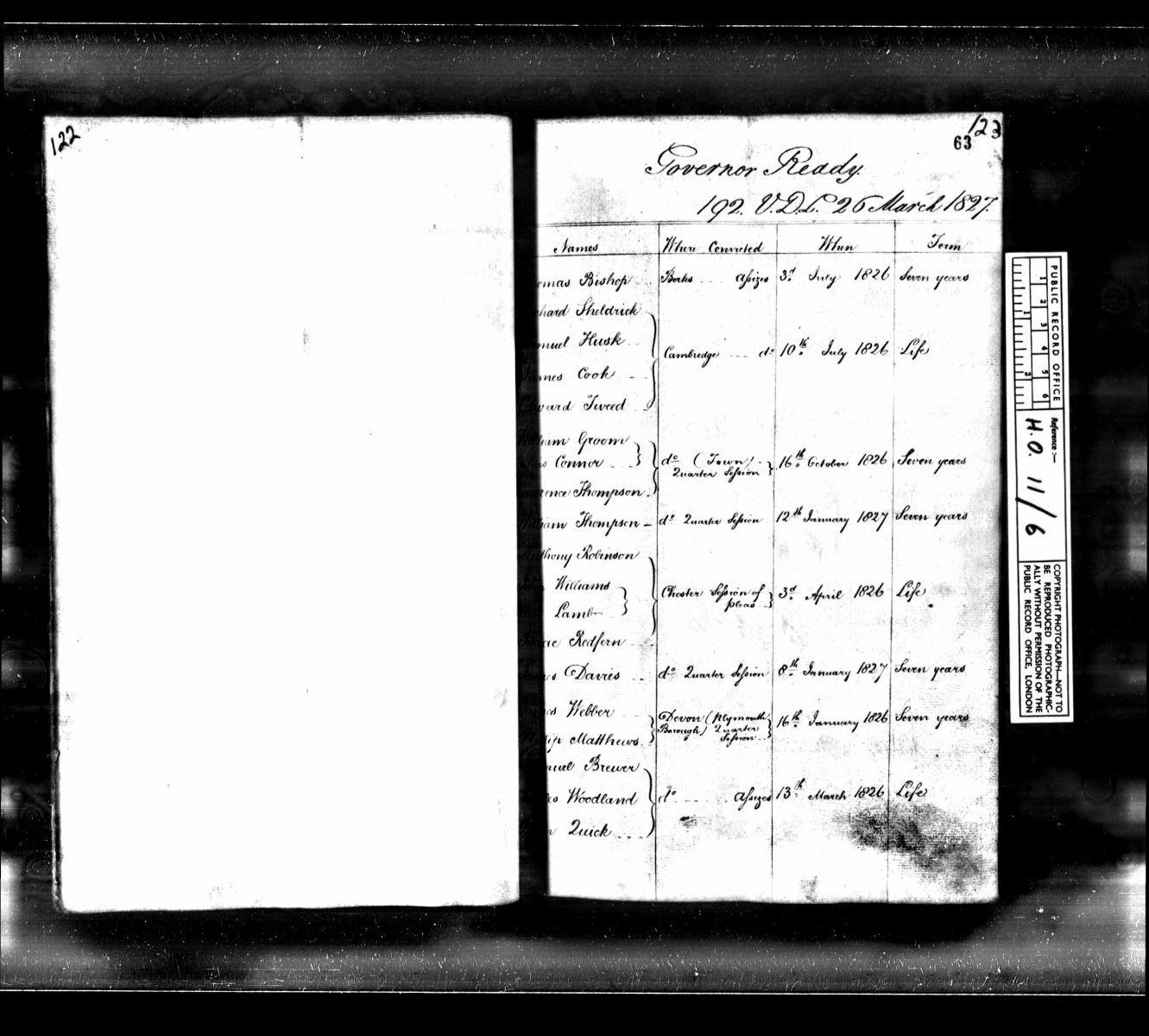 The Governor Ready appears to have left England from Gosport by Portsmouth on 26th March 1827 and arrived in Van Diemen’s Land on 31st July 1827. On arrival, details were recorded concerning all prisoners, including Groom. His entry in convict registers held in Tasmania give various details about his transit immediately before and to Tasmania (“Gaolers report ‘bad’ in hulks ‘bad’ “), whilst he also “Confessed on arrival “for stealing silver plate” “. He also gives other details such as he was married (possibly with a child), that he was last employed hawking at Cambridge, and was Protestant. 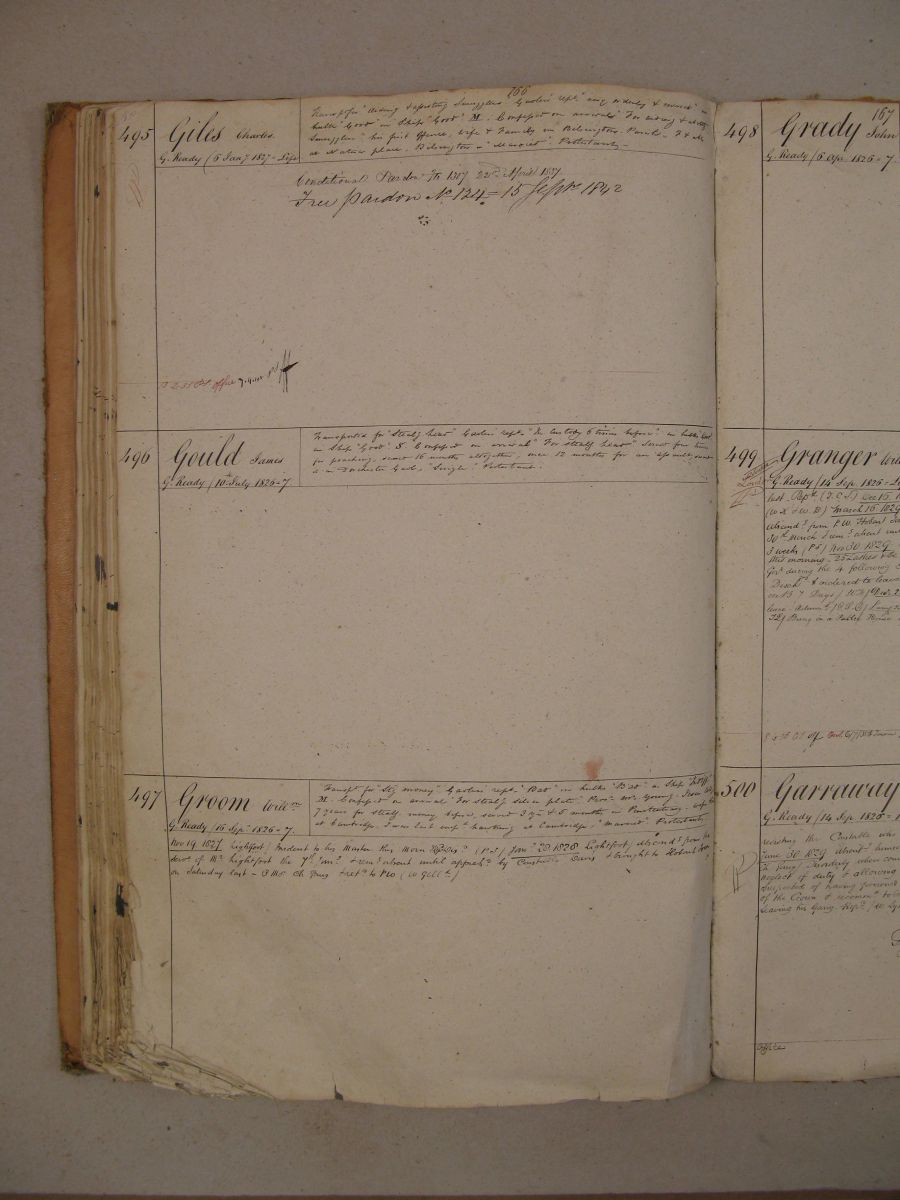 The register also records aspects of Groom's activities whilst a convict in Australia and notes that he was insolent and ran away on 7th January 1828, before being found by a Constable Davis when he was brought to Hobart Town and put in a chain gang for 3 months. A notice from the Hobart Town Courier dated 13th November 1830 suggests that Groom ran away once again and, as in the Cambridge Chronicle, the following detailed physical description was given

“William Groom, 5 feet 8, brown hair, light grey eyes, age 41, a tailor, tried at Cambridge. 16th Sept. 1826, sentence 7 years per Governor Ready, native of Dublin, scar back of forefinger right hand, small scar centre of forehead. Absconded from public works Black Snake, 20th 1828. Reward £2”. This description differs slightly from that given in the Cambridge Chronicle, but perhaps Groom had acquired two further scars (on his head and on his right hand) in the years since his initial conviction.

The discrepancy in age reported between this and the description from the Cambridge Chronicle could be a typesetting error in the newspaper, a result of incorrect information or perhaps even Groom not knowing exactly how old he is.

The one further piece of information of interest from the Tasmanian convict register is the reference to “7 years for stealing money before, served 3 years and 5 months in penitentiary”. Although it is not possible to entirely determine, there is a reference in the Surrey Quarter Sessions for April 1822 to a William Connor aged 27 being convicted of stealing a till from the Royal Kent public house, Kent Street, St. Mary Newington (in Kennington, London) containing 4s 9d in copper money and 2 shillings and 2 sixpences. He was then sentenced to transportation for 7 years. If this is the same William Connor as our William Groom alias Connor who had his sentence commuted to 3 years 5 months in a Penitentiary, then it would give him just enough time to be released from prison (possibly the Millbank Prison – a William Connor is listed as being admitted as a prisoner there in 1822) towards the end of 1825 before making his way to Cambridge and committing the thefts in the College the following year. The age provided in these records would also tie in with that given in the Cambridge Chronicle.

The final reference that it has been possible to find relating to Groom is from The Colonist and Van Diemen's Land Commercial and Agricultural Advertiser dated 17th September 1833 and refers to the possible granting of Groom’s certificate of freedom. Unfortunately, it has not been possible to trace Groom after this date. Perhaps as someone used to using different names, he chose a new name entirely by which to live, so making it impossible to trace what happened to him.

If you have any suggestions about how to trace William Groom beyond 1833, please feel free to get in touch with the Archivist on r.athol@jesus.cam.ac.uk