A recent deposit made to the College Archives, the personal account book of student William Wallace, provides a fascinating insight into the lifestyle of a Jesus College student in the early 19th century.

Wallace, who came up to Jesus in 1828, was initially admitted to Corpus in 1827 but according to official records does not appear to have resided there that year (further implied by the inscription in his account book). This could possibly be explained by the death of his father, Rev Job Marple Wallace in February 1828, who, by his will, appeared to leave an estate requiring significant administration. William’s father was admitted to Corpus in 1770 which, presumably, also influenced his decision to apply there.

As per his father’s will, William inherited a small amount of money, which may have enabled him to splurge on some of the items recorded in his account book. It records expenditures and receipts relating to all aspects of his fresher year at Jesus including:

Although nothing relating to general clothing is recorded, we can get an idea of what items William used to accessorize his main outfit from references to items such as umbrellas (9s), pairs of gloves (2s 3d a pair), gaiters (4s 6d), shoes (£2 1s 6d) and the necessary shoe black (1s), silk stockings (5s), silk handkerchiefs (3s 9d), an eyeglass (18s 6d), galoshes (8s) and walking sticks (6d each).

William was fond of reading, evidenced by frequent notes to purchases of books, including the works of Byron. William’s father’s will mentions a large collection of books and manuscripts that were to be divided amongst William and his siblings so his interest may well have been nurtured at an early age. For topical reading, William’s choice was the Kent and Essex Mercury, presumably so he could keep up to date with news at home in Braxted, Essex.

His interest in music, including comic opera, is apparent and there are references to his purchasing Aeolinas (a type of mouth organ), the sale of his cello and numerous references to the purchase of sheet music. In particular he specifies purchasing a copy of ‘All’s well’ from the opera The English fleet in 1342 by John Braham, a then well known tenor. A recent recording of this song can be heard by following this link to Spotify ‘All’s well: A Duet’. He also specifically mentioned purchasing a copy of ‘The Vocal Lyre, a Collection of Popular National Songs', on 27th February 1829. His interest in music is further illustrated through his payment of 5s on 13th August 1829 to some "Tyrolese Minstrels". 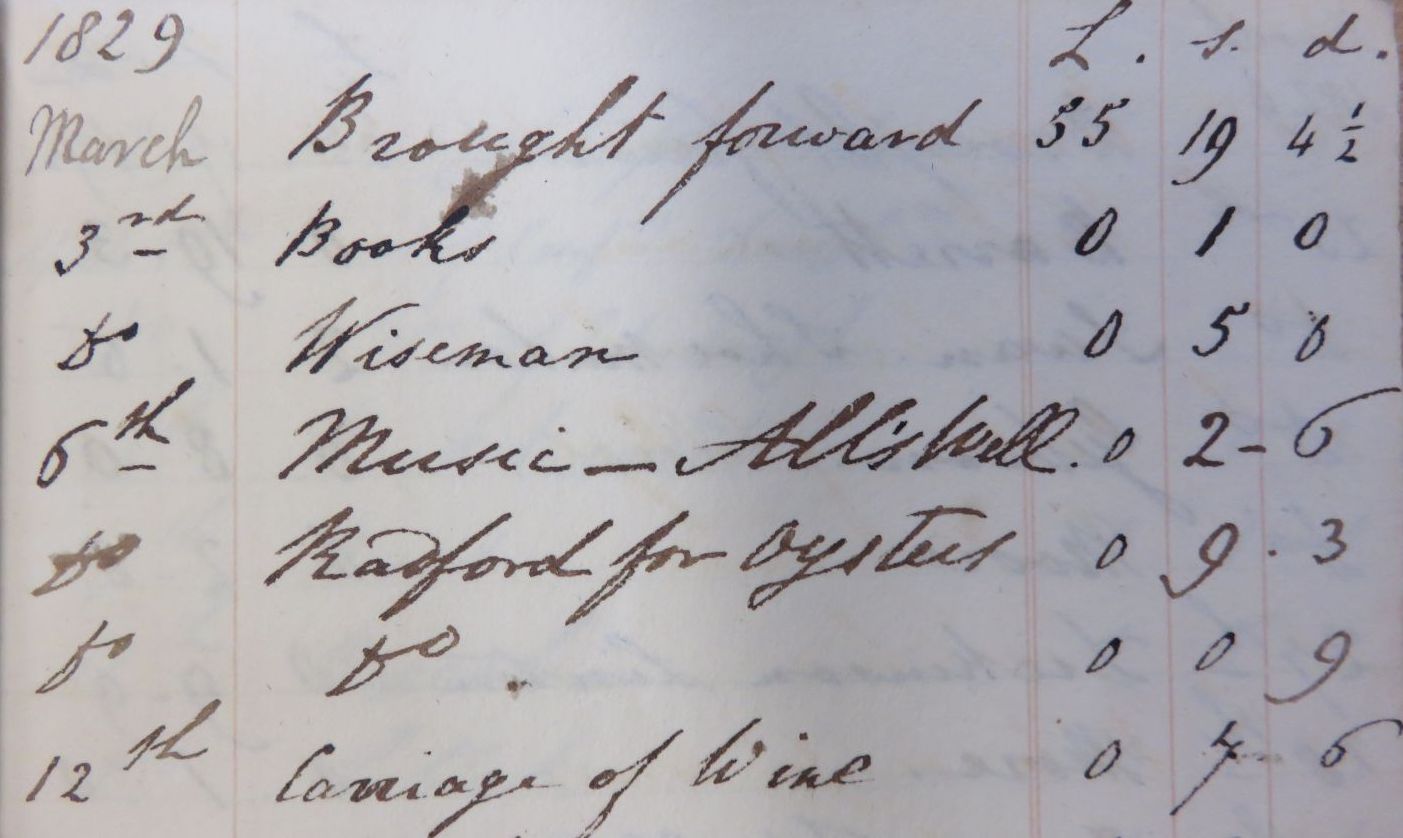 An entry for "rational amusements" shows Wallace’s interest in entertainment if the definition of such amusements included in New and elegant Amusements for the Ladies of Great Britain was still true fifty years after its original publication. William also enjoyed shooting with references to a powder flask, a shot belt and cleaning of his gun and appears to have had a dog (possibly a gun dog) as there are numerous references to kennels and paying someone to look after a dog. Other misclleaneous entertainments enjoyed include boating (with ginger beer) on 2nd June 1829 followed by fireworks that same month, payments made for "puzzles" and a visit to some unspecified "zoological gardens".

Travelling within England to attend balls, particularly in the first quarter of the year, appears to have been popular including those held in 1829 at Ipswich (including a "Fancy Ball"), Witham, Kelvedon, Dedham and another "Fancy Ball" on 10th January 1830. For this he paid £2 to "Roberts for Fancy dress". He also regularly attended plays and concerts and enjoyed travelling to London, Brighton and Stratford.

William corresponded regularly with his brother Arthur shown through payments for postage of letters to him and, mentioned in conjunction with his gaming loses and successful bets (although more frequently "lost at cards"), are the names of some of his friends and contemporaries in College; George Maddison (1827), Benedict Chapman (1828) and William Hamond (1828). His interest in tobacco in its various forms is also evident through repairs of his ‘segar case’ (6s), the acquisition of "snuff and a pipe" and multiple purchases of "phosphorous boxes" (6d each), now more commonly known as match boxes.

As was common until WWII, it was quite usual for students to be responsible for furnishing their rooms in College, often buying much of their furniture from the previous occupant of the room and William's accounts give us a taste as to how he personalised his room through purchase of relatively small items. The wall would have been decorated with "prints, 4 hunting" (5s), a "print of my goldfish" (2s 6d) and "2 prints of Jesus College" (7s) possibly those that had then been relatively recently published in 1798 by Robert Harraden or by William Mason in 1819. The sofa was given a cover of plain Calico fabric in May 1829, but already by the same time the following year, the sofa required recovering. To further decorate the room, Wallace also bought a geranium (1s 6d), a fig tree (2s 6d) and some flowers (19s). 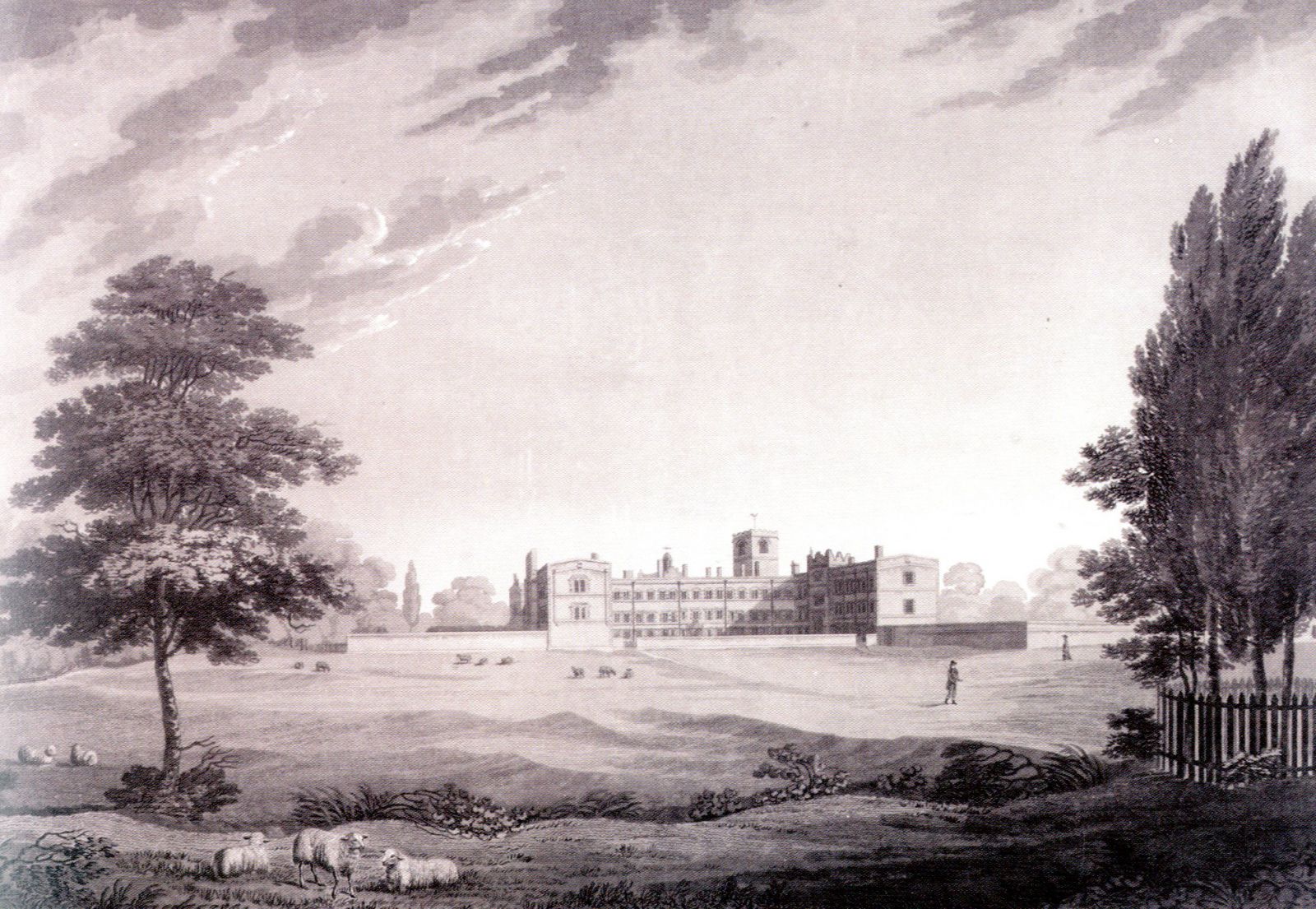 William appears to have kept relatively well combed short hair and a clean shaven appearance as suggested by his regular hair cutting (1s), purchase of a razor (5s 6d) and a pocket comb (4s). His other personal hygiene habits are hinted at through the purchase of a scent bottle (4s), lavender water (1s 3d) and soap (1s). Hunt's pills are also mentioned, although it has not been possible to find a reference to those. If you know what they might be, please do let me know.

Wallace spent a not inconsiderable amount on food and drink, some of which was, presumably, used to entertain his friends when they visited his room. Brandy and water, 'caraphs' of wine, cherry brandy and mulled sherry were on offer to the drinkers, whilst those wanting something less potent might have been offered lemonade or tea. The foods on offer included the relatively luxurious 'ices', melons, apricots, oysters alongside the more everyday biscuits, apples, walnuts and herring. Of particular interest, however, were references to 'Cottenham cheese', described in the Victoria County History as "Two varieties were made, a hard cheese like Stilton and in the autumn 'single Cottenham', said to resemble Camembert. The quality and quantity of the cheese were attributed to the nature of the fen pastures. Cheese making declined rapidly after inclosure, though it lingered into the 1930s".