The College Archives is currently running a volunteering programme for Jesus College students through which participants are creating an index to the College accounts or ‘audit books’ from the 1550s to the 1880s.

Since the project started in October 2016, numerous entries of interest have been found, including an entry from the accounts from 1734 which reads ‘p[ai]d Mr. Lambourn a Bill for cleaning the Mathematical Instrum[en]ts given to the Coll[ege] by Mr. North’.

Research in the College Archives has shown the entry refers to the same items Roger North mentioned in his will, an extract of which reads “I give my black Case of Mathematical Instruments with all the furniture to Jesus Colledg in Cambridge and their successors for ever not to be at any time separated or aliened”.

These instruments, still owned by the College, are one of two sets of mathematical instruments owned by Roger North at the time of his death in March 1734.

The set owned by the College contains four trays of instruments, including set squares, compasses, and a set of ‘Napier’s bones’; mathematical tools used to work out products and quotients of numbers.

Indeed, North described the instruments in great detail in his autobiography Notes of Me (the original manuscript of which is at the British Library),  where he explained why he had some of the instruments adjusted and improved to meet the demands of his own experiments into mathematics, architecture, light and perspective. 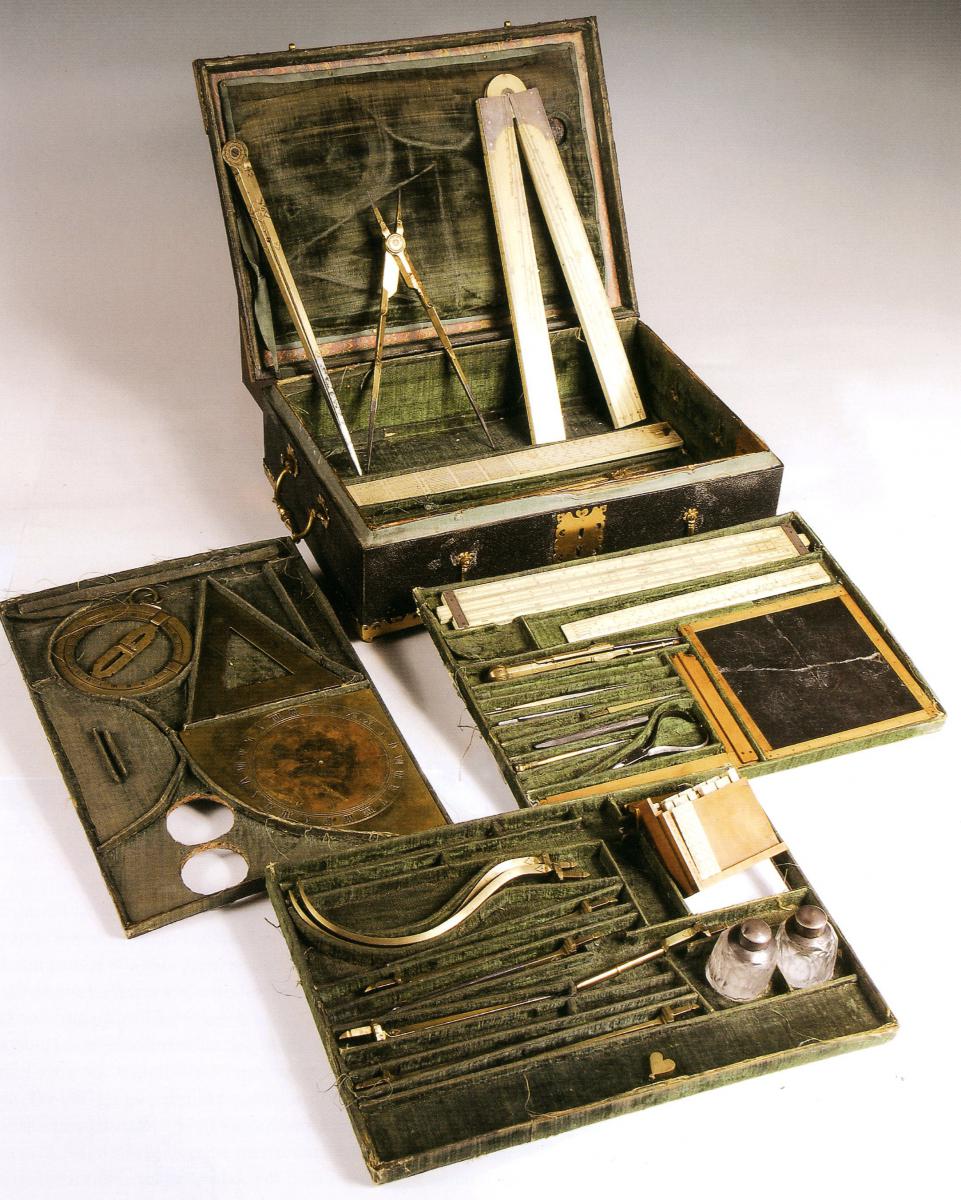 It also appears that, from Notes of Me, the instruments were originally made for Roger's older brother Francis by Henry Wynne of Chancery Lane for the sum of £50. Indeed Wynne is also credited with pioneering the creation of barometers, something that was possibly influenced by Francis' keen interest in recording the weather and probably made achievable through the patronage that Francis provided for Wynne.

The instruments are considered a significant example of mathematical tools in Britain and were included in the exhibition ‘Compass and Rule – Architecture as Mathematical Practice in England’ at the Museum of the History of Science in Oxford in 2009. 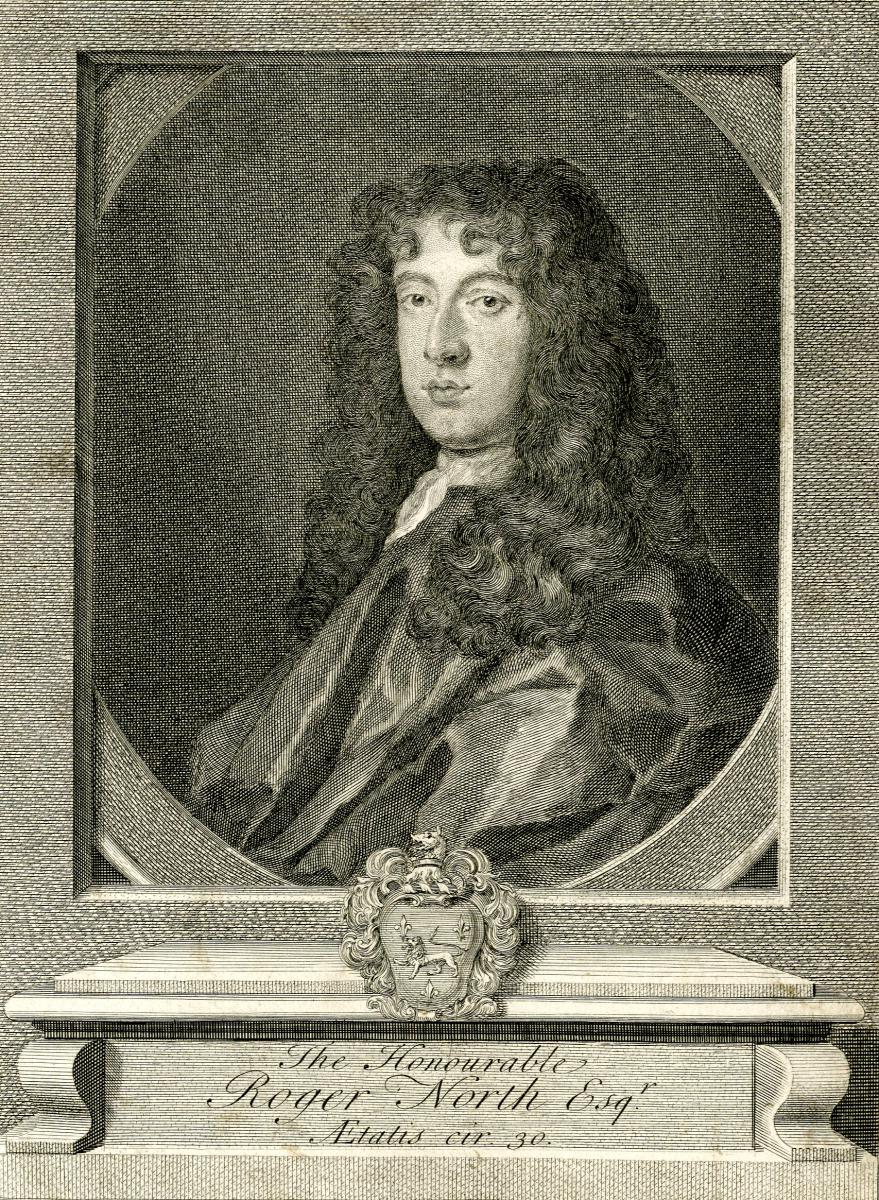 As to Roger himself, he was born in 1651 at Tostock near Bury St. Edmund’s to Dudley North and his wife, Frances Brockett. Roger was admitted to Jesus on 30th October 1667, seven years after his elder brother John, who was a Fellow of the College and who acted as his tutor.

Roger and John shared rooms for the year Roger studied at the College, the rooms described as being at the west end of the Hall, so possibly in the area now occupied by the servery. Roger said that he came to Jesus in order to study ‘naturall philosophy’, particularly the works of Descartes, although he also mentioned in Notes of Me that when at Jesus he owned copies of books by Georges Fournier and Isaac Barrow.

North was admitted as a Fellow Commoner for a fee of £2, the term Fellow Commoner then indicating that the recipient was of an aristocratic or wealthy background and who was permitted to enjoy the privileges of high table.

However, according to his autobiography, North did not feel he was able to get to know the other students. He said “I did most extreamly envy the comon scollers for the joy they had at foot ball” because he was “tyed up by quality from mixing with them, and enjoying  the freedomes of rambling which they had”.

North also pointed out that as the youngest son (and indeed sibling of ten) of Dudley North, Baron North, he did not have “either mony or assurance to mix with my equals, who were wild and extravagant”, leaving him to befriend only ‘grave seniors’. However, he did acknowledge that attending university is a ‘most usefull exercise’ to be ‘recomended to all students’.

North was resident at Middle Temple when it suffered from a disastrous fire in 1679 and was instrumental in assisting with the designs for the reconstruction, putting into practice his interest in architecture. Possibly his most significant architectural contribution towards this project was his design of the entrance gate onto Middle Temple Lane from Fleet Street which was completed in 1684.

A few years later in 1690, being tired of living in London, North negotiated the purchase of an estate at Rougham in Norfolk where he built Rougham Hall, although this has since been largely demolished and replaced by a 19th century house.

It is said Rougham Hall was raided three times for weapons at the time of the 1715 Jacobite rebellion due to North’s marriage to Mary Gayer whose father, Sir Robert Gayer, was a known supporter of James Stuart. 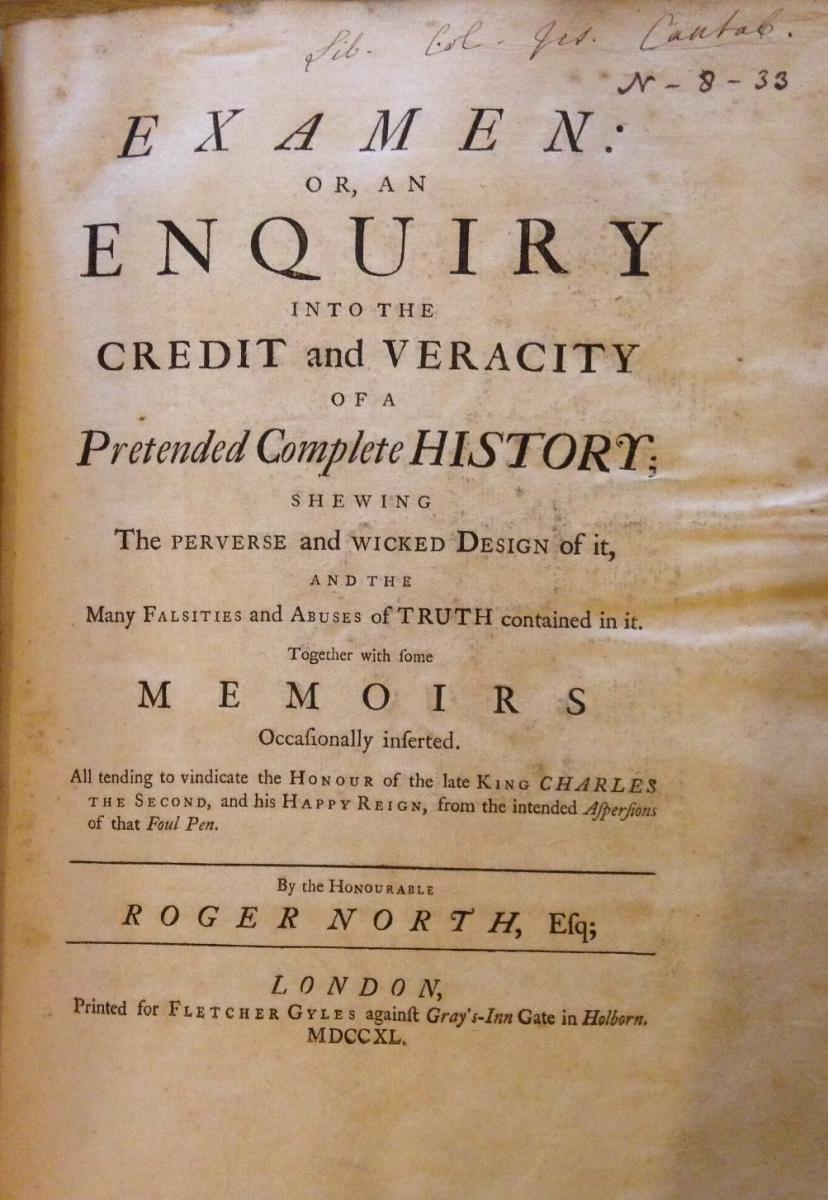 The North’s connection to Jesus College continued when Roger’s son Montagu was admitted to the College in 1730, Montagu later publishing his father’s work ‘Examen’ in 1734, the year of Roger’s death. Examen aimed to show the reign of Charles II in a very positive light which is perhaps not completely unexpected considering the direct contact North had to Charles II when attending Privy Council meetings in his role as a senior lawyer.

Indeed, the published version of Examen, makes direct reference to the original manuscript text which was given to the College by North where, along with the mathematical instruments, it still resides. 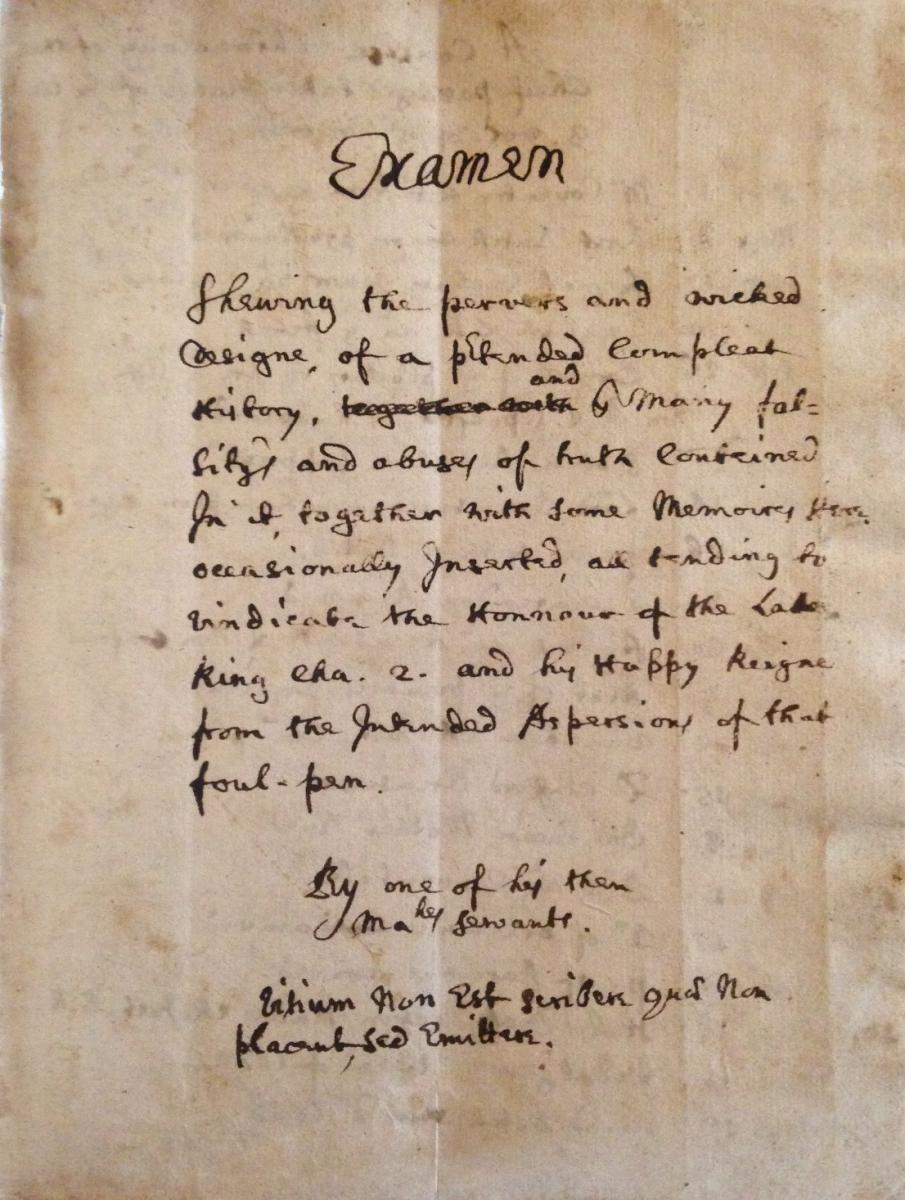