Archive of the month: Living in Tewin

Despite the title of this article, the aim is not to comment on residing in rural Hertfordshire, but to look at the property the College acquired in the village of Tewin, Hertfordshire in February 1699 through the benefaction of Edmund Proby.

A ‘living’ in the context being considered here was a post held by the parson of a parish – the rector or vicar – which was tenable for life (now until retirement age). This carried with it the right to officiate in the parish church, occupy the parsonage house – the rectory or vicarage – and to formerly receive all, or if a vicar just part, of the income from the parish’s endowments and land.

English law had long treated parishes as a form of property, which, like other property, could be transferred by descent, bequest, gift or sale, although it did come with an obligation to parishioners. By the 13th century, income generated by some parishes exceeded that needed to support their priest and maintain the church and parsonage.

The practice therefore developed of transferring the property rights in such parishes to other church institutions such as monasteries, nunneries and collegiate churches (cathedrals and minsters) that were thought to be deserving of support. This was usually agreed to in return for the promise of Masses and other prayers for the transferor and members of his family.

This led to a split in the rights in the parish, giving the rector or vicar a fixed wage or stipend, occupation of the parsonage and a share of the parish income. The other rights and income were left in the hands of the institution, along with the obligation to pay the vicar’s stipend and keep the chancel of the church (but not the nave) in good repair.

Splitting the property rights in a parish in this way had advantages from the church’s point of view of retaining the rights of appointing the parson (the advowson as it came to be known) rather than have that fall into lay hands.

At the Reformation in the 16th century, all church property reverted to the Crown, which was then sold or redistributed as seen fit by the monarch, often to courtiers or other laymen who saw them as a good investment. This resulted in vicar’s wages being fixed even during periods of inflation, when the income from the endowments increased.

In turn, this led to difficulty finding well-educated priests willing to serve as the parish clergyman as wages were inadequate. This concerned the church greatly and wanting to help alleviate this problem was one reason behind Edmund Proby’s benefaction to the College.

The College also had a further benefit of owning livings. At the time of the acquisition of the living at Tewin, the College had a set number of Fellows, which meant that until someone left, there was no room for new members of the Fellowship. In acquiring livings and advowsons, the College was able to provide somewhere for older Fellows to retire to where they would act as the parish priest, thus creating the space needed for younger Fellows to join the College. From a clerical perspective, this worked as many, although not all, Fellows were ordained. Indeed College livings became something many Fellows looked forward to receiving. 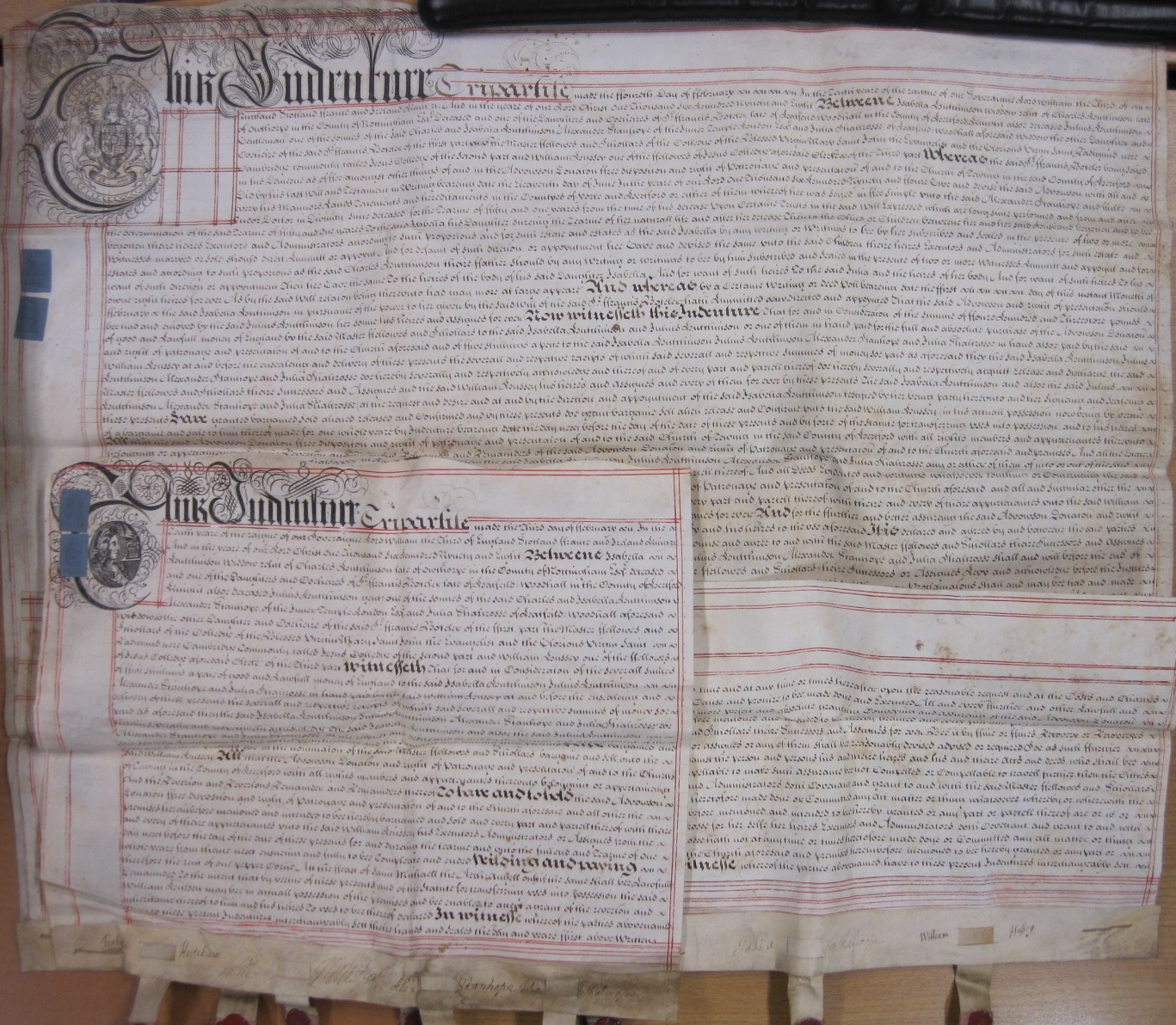 The College acquired the living at Tewin for £488 with funds from the Proby Trust. The living was bought from the previous lay owners, Isabella Hutchinson and her son, Julius. Isabella’s father, Sir Francis Boteler, had acquired the living at Tewin to support a charity he established for the assistance of five widows. One of the widows, Joan Montford, had been married to John Montford, a prebendary at St. Paul’s cathedral and brother to James who had been rector at Tewin, who probably succeeded their father Thomas. Both James and John had Cambridge connections, James having attended Emmanuel and John, Trinity.

The Proby Trust was established in 1674 through the benefaction of £1200 from Edmund Proby who came up to Jesus in 1617. He was the third son of Sir Peter Proby, the Lord Mayor of London in 1622, and younger brother of Heneage and Henry Proby, both of whom matriculated to Jesus in 1614.

Indeed Charles Proby, the great nephew of Edmund Proby, was the first rector at Tewin appointed by the College in 1702. Charles married Mary, the daughter of Richard Harrision of Balls Park, Hertfordshire (considered by some to have been inspiration to Jane Austen when writing Pride and Prejudice). Charles died at Tewin on the 16th January 1727 and there is a memorial inscription to him in the chancel of the church. Coincidentally, John Montford also has a memorial inscription in Tewin church, no doubt due to his family’s connection to the parish.

Rather unusually, the receipt for the drawing up of the deeds relating to the College’s purchase of Tewin survives in the Archives and shows the total cost for having the document written and legally confirmed was £6 1s 2d. 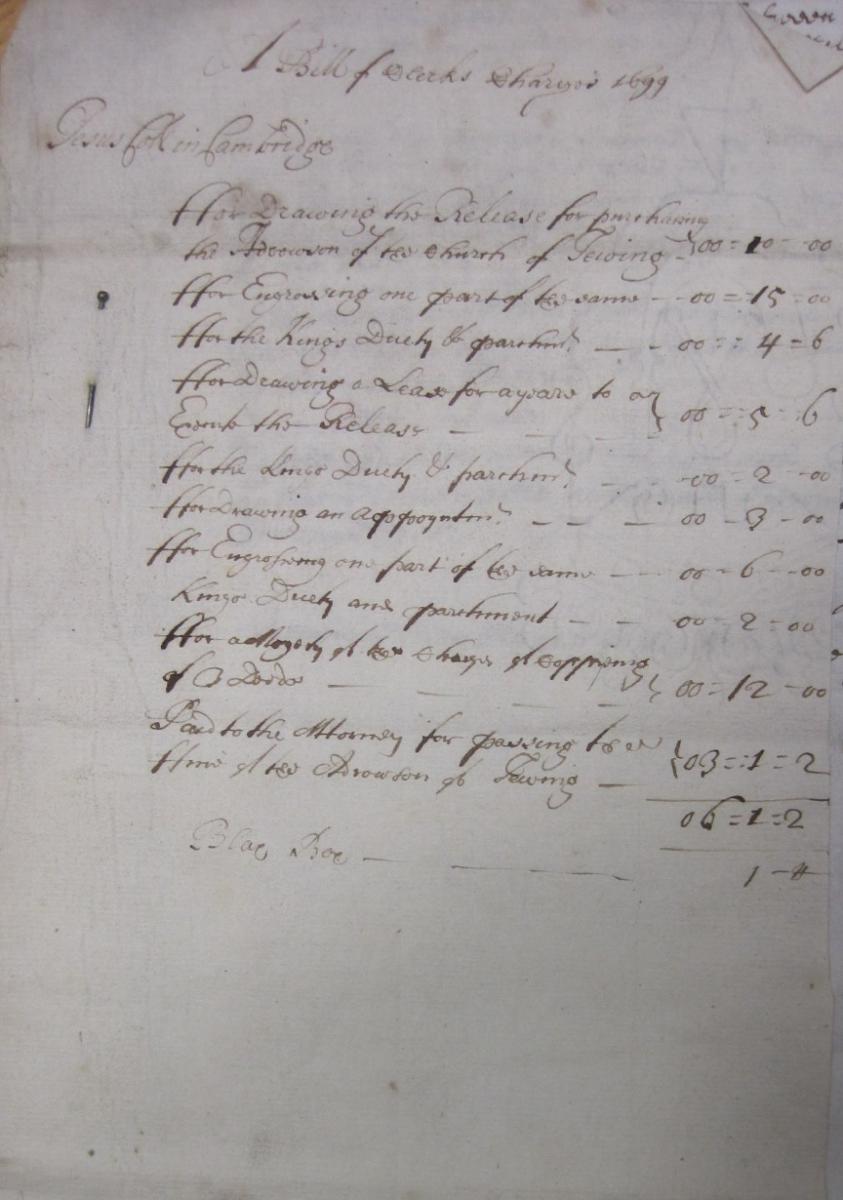 As to the property itself, in addition to the rectory house, the living at Tewin included just over 11 acres of land. The building now known as the Old Rectory was built in the early 18th century by Charles Proby, incorporating elements of an earlier, possibly Tudor, building. Dr. Henry Yarborough then gave the College £500 in 1773 for building a new rectory house on the same site as the one built by Charles Proby, although this money was probably used for improvements, as complete reconstruction clearly did not take place. Yarborough was admitted to Jesus in 1708 and was made rector of Tewin in 1728 following the death of Charles Proby.

As can be seen in this 1913 plan showing the ground floor of the property, the area marked kitchen is likely to be the remaining part of the original rectory house showing a large inglenook fireplace with an adjoining bread oven. The other parts of the building with walls drawn parallel to the edge of the plan, is likely to be the result of the 18th century construction by Charles Proby and improvements from Yarborough’s bequest. 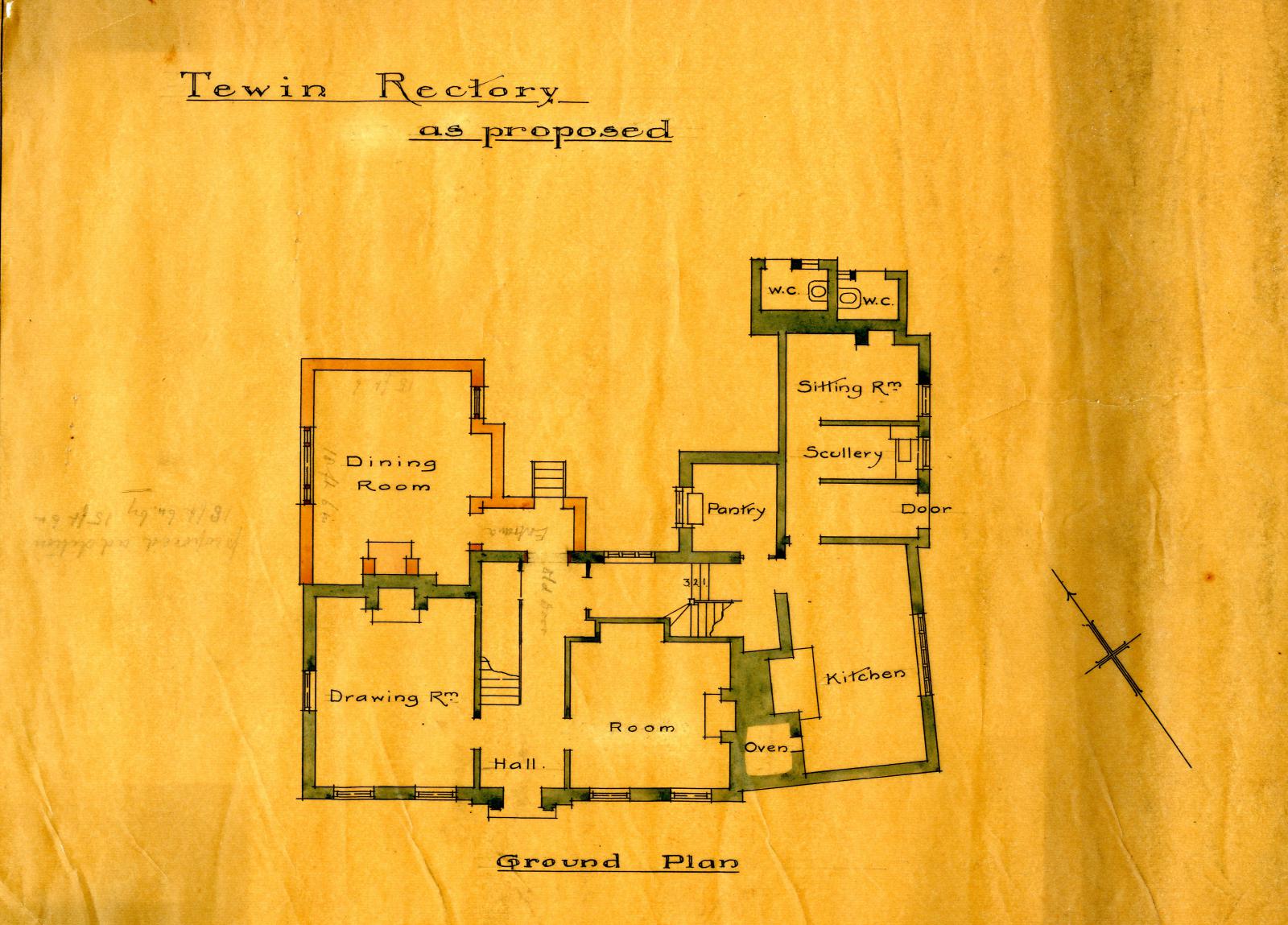 Having apparently been in an increasing state of disrepair throughout the 19th century, the property underwent various repairs and improvements throughout the 1920s and 1930s including the installation of ‘artificial lighting’ (electricity). However, at the beginning of the 20th century, in order to maximise income from the property, the Old Rectory at Tewin appears to have been let to various tenants, whilst the incumbent at Tewin moved into a smaller house known as the ‘Cottage Rectory’. Indeed correspondence between three different rectors of Tewin in the first half of the 20th century and the bursar of the College suggests that the Old Rectory had become a completely impractical house to maintain for most clergyman except only those with a ‘substantial private income’.

Following the letting of the Old Rectory, requests were soon received from tenants and other individuals who were interested in buying the rectory, including Sir Otto Beit (in 1917) who lived nearby and wanted to acquire Tewin rectory as a residence for his estate manager.

Ultimately, it appears that the Old Rectory was sold sometime between 1944 and 1971, whilst the College’s landed interest in Tewin was finally sold in 1976. However, the College is still involved with the appointment of the vicar of Tewin and has a place on the appointments committee for the parish.