Archive of the month: Labels and Dripstones

In a letter dated 27th July 1828, Charles Green, wrote to the then Master to discuss thoughts concerning restorations in the College Chapel.

Green was a Fellow of the College, having come up in 1817 following his ‘migration’ from Trinity, whilst the Master was Dr. William French. The letter is one of two surviving in the College Archives that describe the architectural work and restorations that took place in the Chapel in 1828.

These works have generally been overlooked, possibly because they came between the more substantial changes of 1788-90 (which involved insertion of false ceilings and creation of a wall separating the nave from the chancel) and those of the mid 19th century (which, in addition to significant restoration, involved the removal of what had been added in 1790).

Although the only reference to the 1828 works in Willis and Clark’s Architectural History of the University of Cambridge is ‘the north and south pier-arches were repaired’, it is clear the work extended into the chancel, becoming more complex the longer it continued. However, the original intention appears to have been just to repair the pier-arches and it was only during their restoration that further medieval architectural features were discovered that were deemed worthy of preservation and restoration.

Prior to Green’s letter of July 1828, Council had, at a meeting of 20th May 1828, accepted an estimate by Thomas Clayton of £59 9s 4d to “repair the columns and arches on the south and north side of the chapel”. This was the same estimate dated 15th May 1828, that Clayton sent to William Walters, who was a fellow of the College from 1822 and who later changed his name to William Walters Clayton. The name appears to have been a coincidence, however, Walters changing his name in honour of an aunt of his, Dorothea Clayton, who left him a legacy, rather then there being any family connection between him and Thomas Clayton. The image below shows the extract from the Council minutes that were signed by French, Green and Walters amongst others. Please see the image gallery to view a copy of Clayton’s estimate.

Further discussions with Clayton clearly took place (although these are not mentioned in the Council minutes) as, in his letter to the Master, Green refers to another estimate given by Clayton for £9 7s to reinstate the 5th lancet window and the half arch to the west of the four existing lancet windows on the north side of the chancel. This included work to be done to the stone surrounds and, for the window, glazing. The drawing by Green in his letter illustrates to which window he was referring whilst the photograph shows the same window and half arch today. 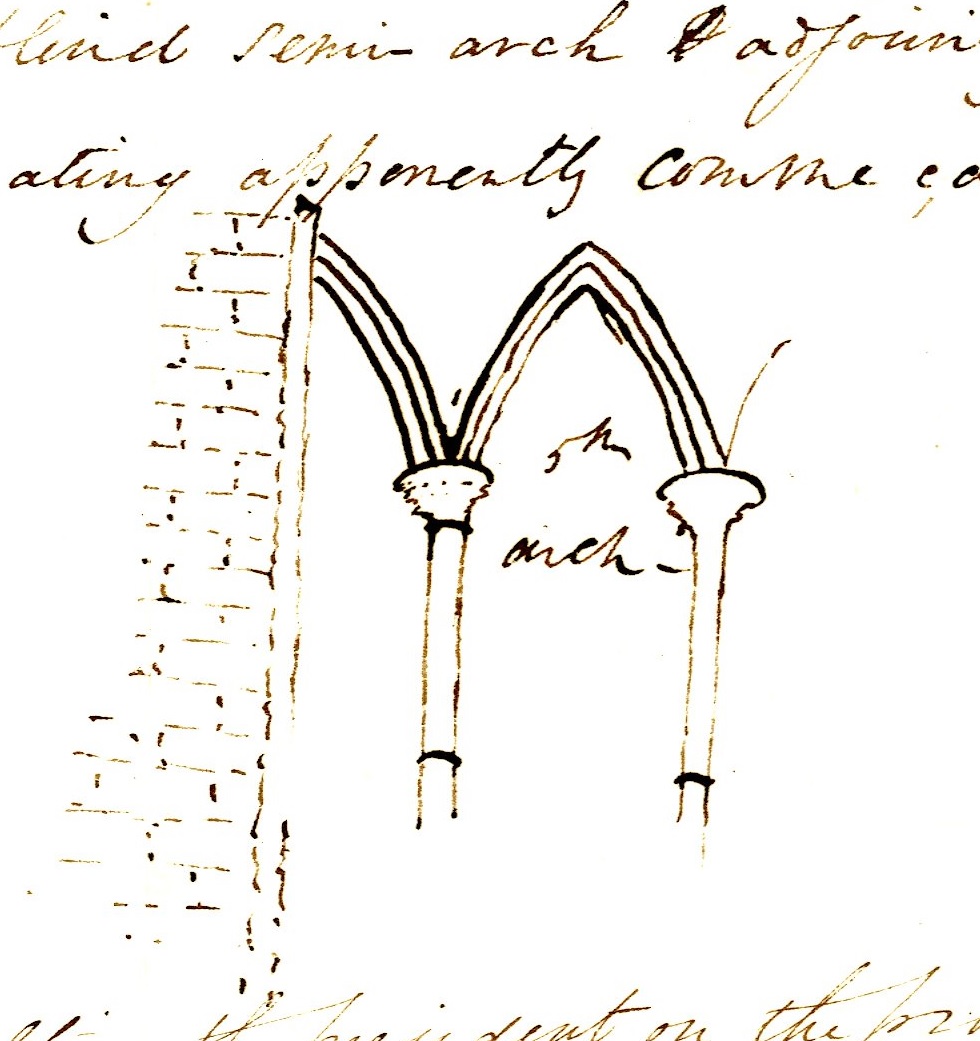 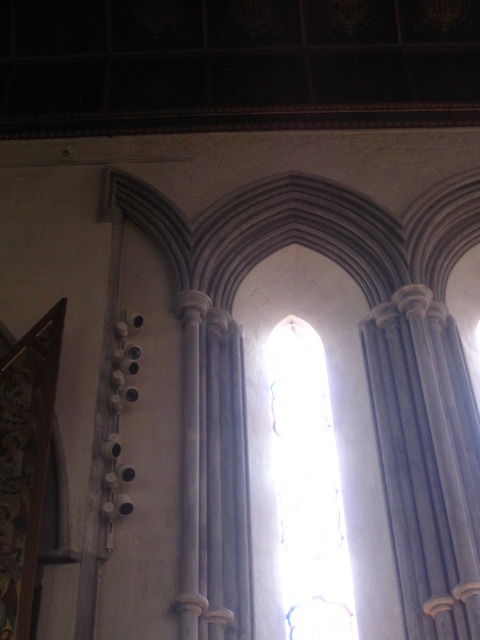 It is interesting to note that Green describes how he had once believed it was unlikely that any significant parts of the 5th window and half arch survived, but was pleased to find that it did once it was uncovered during repair of the pier arches. Although generally complete having survived under lathe and plaster, Green did note that the fronts of the capitals of the columns had been shaved slightly at an earlier date in order that they lay flush with the wall that covered them.

Green also mentions that at the time of his writing to the Master, he was staying at the Tavistock Hotel in Covent Garden (since demolished with the site now part occupied by James Street) as he had been in London to get some idea of how the window surrounds might have once appeared. He visited the Temple church for ideas of what the ‘labels and dripstones’ for the chapel might have looked like, but in the end decided that the labels existing on the other windows on the north and south sides of the chancel would do as a pattern.

In his second letter dated 17th August 1828, Green describes how ‘the restorations in chapel are advancing rapidly’ and that further work carried out in the chancel included a string course carried along under the bases of the south windows terminating against the wall of the east end of the chapel.

As part of this same set of works, it was also decided to remove the wainscoting at the east end of the chancel which had been added in 1679 following its donation by the Master, William Saywell, 1679-1701. However, once removed, the bare wall showed the contrast between the remnants of the three original tall windows of the nunnery church and the large window that had later replaced them (which was in turn removed and replaced with the current windows which followed the design of the original three).

Green felt the appearance was so bad that it was decided to continue the stone string course along the bottom of the window to try to cover up the disparity between the two periods of architecture, although he stated that he could still not ‘bear the sight of it’. Certainly, this suggests that it was not widely known at that point that there had been such significant architectural changes to the east end window otherwise it is unlikely the contrast would have caused such a surprise. Similarly, with a project that was already severely over budget, it is understandable that attempts were not made to restore the three windows in the east end at that time.

The string course was then continued on the north wall of the chancel along the bottom of the windows on that side as can be seen in this early 19th century print. 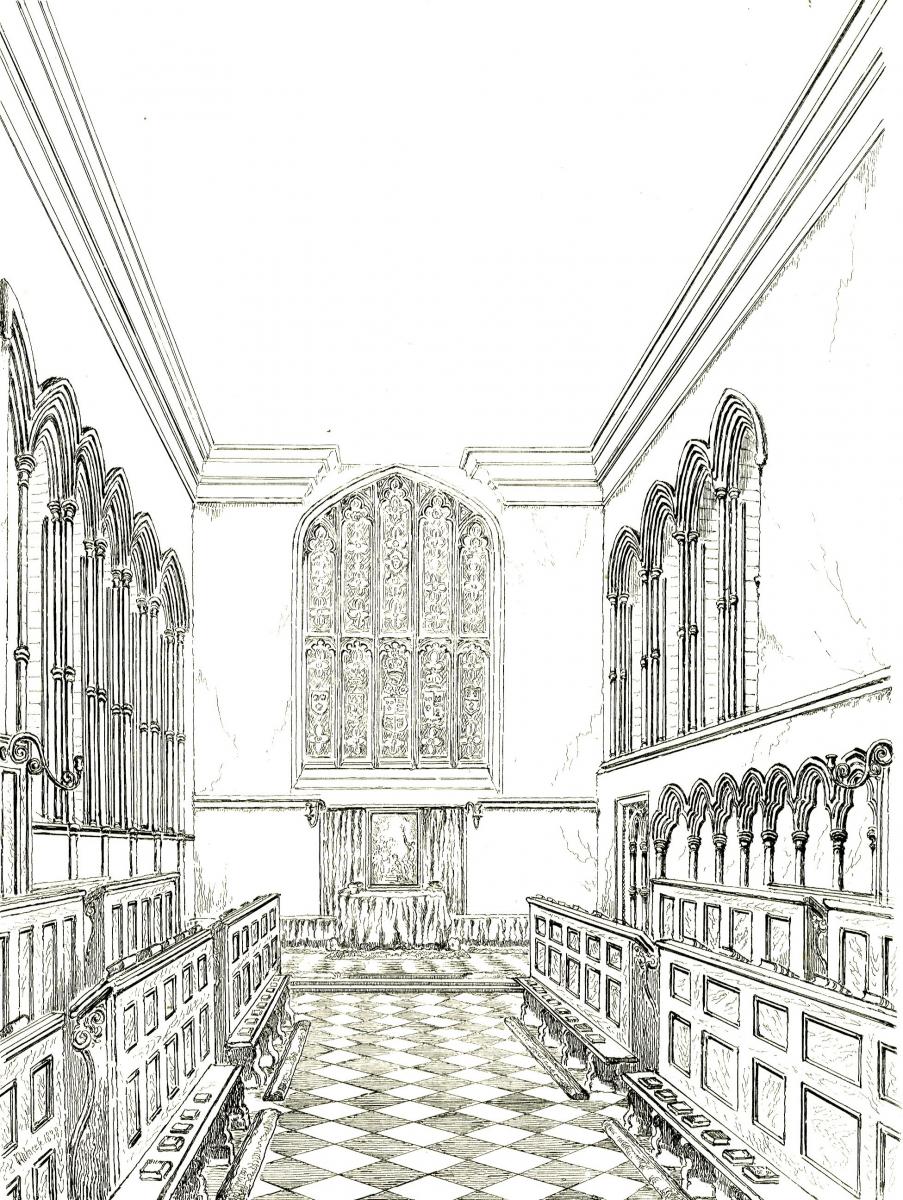 Despite the original estimate provided by Thomas Clayton, his final bill for the work undertaken in 1828 came to £124 4s 6d, more than twice the original estimate. Green describes his annoyance at the disparity between Clayton’s estimates for the work and the actual bill although reluctantly says that there was not much to be done other than to pay the bill. Green does however concede that once the work was finished that ‘those parts of the chapel will be restored to their pristine beauty’.

So although the chapel as we see it now is mainly the result of the work carried out in the 1840s and 1860s, it can certainly be considered that the idea of restoring the chapel to its medieval appearance began with the works in 1828. 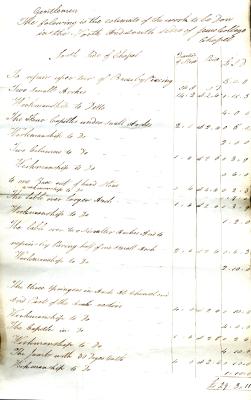 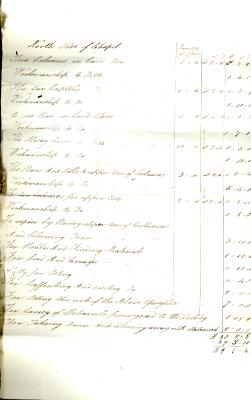 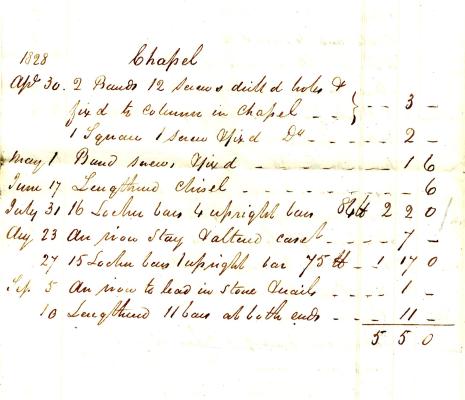