Archive of the month: Fundraising in the 18th century

Fundraising, a key element to all Cambridge Colleges and carried out through dedicated development offices, is generally considered to be a relatively modern aspect to College life.

However, certain records in the College Archives show that this is something that has been taking place for hundreds of years. Although the earliest successful fundraising campaign for a building by the College appears to have taken place in the 1630s and raised funds for the construction of C and D staircases, there is relatively little detailed evidence relating to this, other than brief entries in the College Accounts and Benefactors Book.

More evidence relating to the second major fundraising campaign in College survives in the College Archives and provides a detailed insight into the processes relating to the acquisition of funds for and construction of such an endeavour. Following growth in student numbers and with a certain desire for uniformity amongst the ranges of buildings in First Court, particularly following the construction of C and D staircases eighty years previously, it was decided to build a third storey onto what is now known as A and B staircases. Prior to this, the previously two storeyed building had undergone little change, at least externally, since the conversion of the block to accommodation from the grammar school which previously occupied the range and which was abolished by Elizabeth I in the 1570s. The image above shows what A and B looked like before the building project.

To start off the campaign, letters were written to College alumni to explain the need for the extension and we are lucky enough to have a copy of one of those letters survive in the College Archives. In the letter, dated 17th May 1718, Richard Warren, the then bursar and elder brother of William Warren (who became bursar at Trinity Hall following a period as vice-Master there in the 1720s) wrote to William St. John, 9th Baron St John of Bletso “begging ye assistant of our Friends … and that we have good reason to believe your Lordship to be one of that number”. 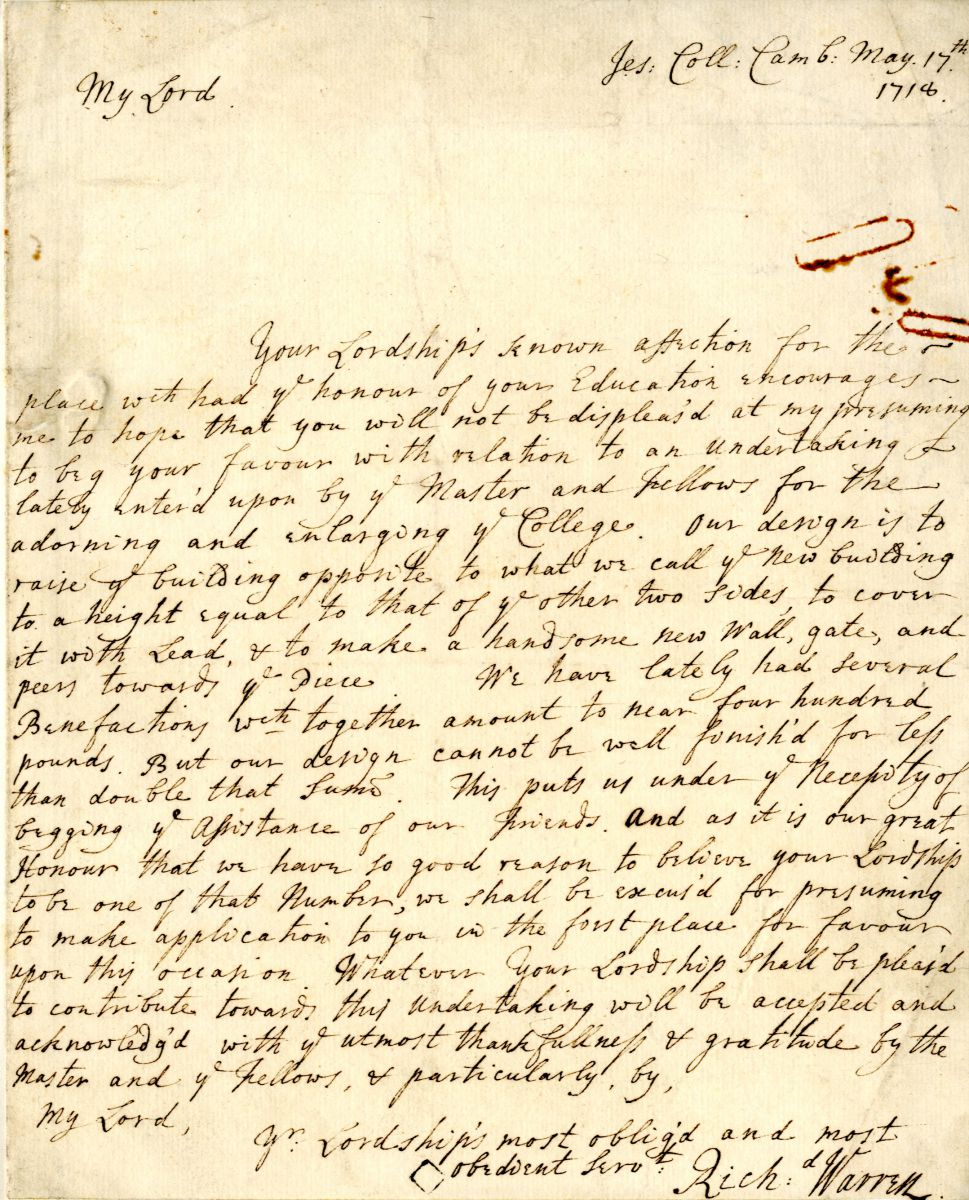 The work carried out on the rooms in the staircases was significant and not only saw the construction of the new storey, but also the refurbishment of existing rooms which had not been thoroughly refurbished since the 1570s. The few surviving bills from tradesmen employed to build and refurbish the staircases give some indication as to how the rooms would have appeared following the refurbishment.

The rooms (with particular reference being made to B2) appear to have been covered with a painted wainscot or wooden panelling. The panelling was made by John Smith the joiner and painted by Robert Dalton, although unfortunately no indication as to the colour of the paint is given. John Smith also appears to have sourced some of the fabrics for the rooms at the time including green baize (possibly for use as curtains, at 2s 6d for 1½ yards), new bedcord (1s) and two mats (1s). The rooms appear to have had ‘hangings’ on the walls, as supplied by John Smith for the rooms of Geoffrey Ekins, James Shrawley, Benjamin or Edward Tew (brothers studying at Jesus at the same time) and Simpson Wood. Ekins’ study was also furnished with a new door lock, whilst Shrawley’s room had new tables. Joseph Woodcock, the bricklayer and plasterer, was also paid for ‘pargetting the chimneys’. From the expenses in the bills, this was most likely the type of pargetting described in the Oxford English Dictionary as being made of a mixture of dung and mortar used to line chimneys and not the finer pargetting used to decorate rooms. The phrase ‘whiting the chimneys’ also suggests that the plaster work in the rooms, or at least on the chimney breast, was whitewashed.

Duck or Dutch matting also appears to have been bought by the yard, most likely for a floor covering. Duck matting is a sort of heavy woven cloth whilst Dutch matting is known to have been advertised for sale in newspapers at the time. The doors had ‘cross-garnet’ hinges and sash windows. Perhaps of most significance, is the evidence connecting Robert Grumbold with the construction work. Grumbold was part of a family of architects and masons with a strong connection to Cambridge and was responsible for work at various other Colleges including Clare and Trinity. The work carried out at Jesus was undertaken about a year before Grumbold died in 1720 aged 81. The fact he did not write his own bill (as he had done previously) and that his signature is somewhat shaky, suggests that he may have been getting more infirm whilst working on the project at Jesus.

Following the extension and refurbishment, it is perhaps unsurprising that the new rooms on the upper storey of the range were immediately let to three pensioners, or fee paying students, who would have been considered a source of income that could be used to recoup some of the money spent on the works. Those three pensioners were George Lewis, Henry Toundrow and Edward Pemberton.

Although the surviving twenty two bills conerning this project are the main evidence relating to this development, one further piece of supplementary information comes from a single page in the College Accounts. This page was amended on an annual basis and shows that the College required more money to complete the project than initially anticipated. Dr. Dawson, the bursar after Richard Warren, personally loaned £163 to the College, repayments of which were made by allocating him the room rents from the three new rooms created at the top of A and B staircases. This debt to Dr. Dawson was finally paid by 1729. 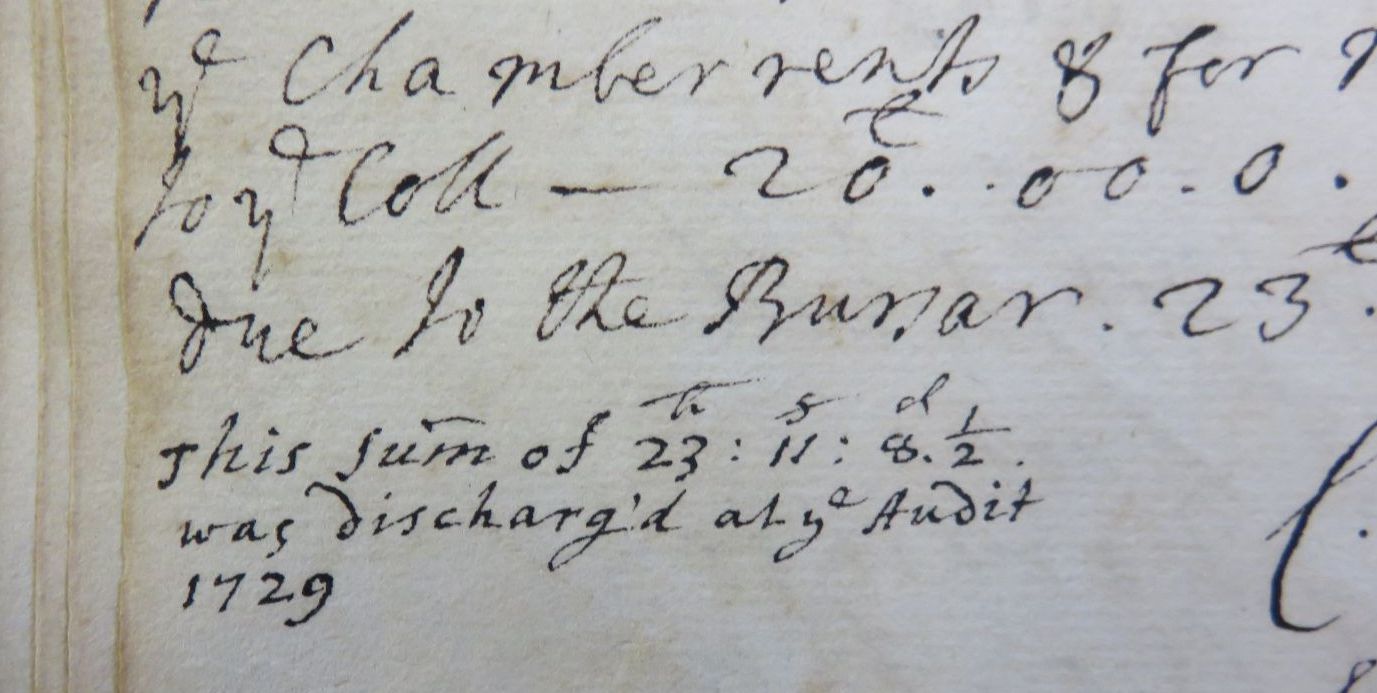