Archive of the month: Felix Culpa

The 2nd December 1956 saw the ninth annual production (since 1948) of mystery plays with accompanying medieval music take place in the College Chapel.

The title, Felix Culpa (translated as ‘happy fault’), was given to the selection of plays taken from Maurice Hussey’s then new translation of the 14th century Chester cycle of mystery plays. Mystery plays are considered to be the earliest types of plays performed in Europe and usually focussed on the telling of stories from the Bible, whilst the ‘Chester cycle’ is one of four near complete sets of surviving such plays from late medieval England. The College’s performance was produced by student Jeremy Gotch.

Felix Culpa opened with a 12th century Chinese hymn on the “Spirit of the Waves” by Chiang K’uei. This was undoubtedly a direct influence by Fellow Laurence Picken who was not only responsible for coordinating and directing many of the mystery play performances in College from the late 1940s onwards, but also had an expert knowledge and interest in Chinese culture and traditional music. Indeed the following review of the performance from the then student magazine Chanticlere, written by Peter Fletcher who arranged and conducted samples of 12th to 16th century music to accompany the play, details just how complicated the musical performance was. 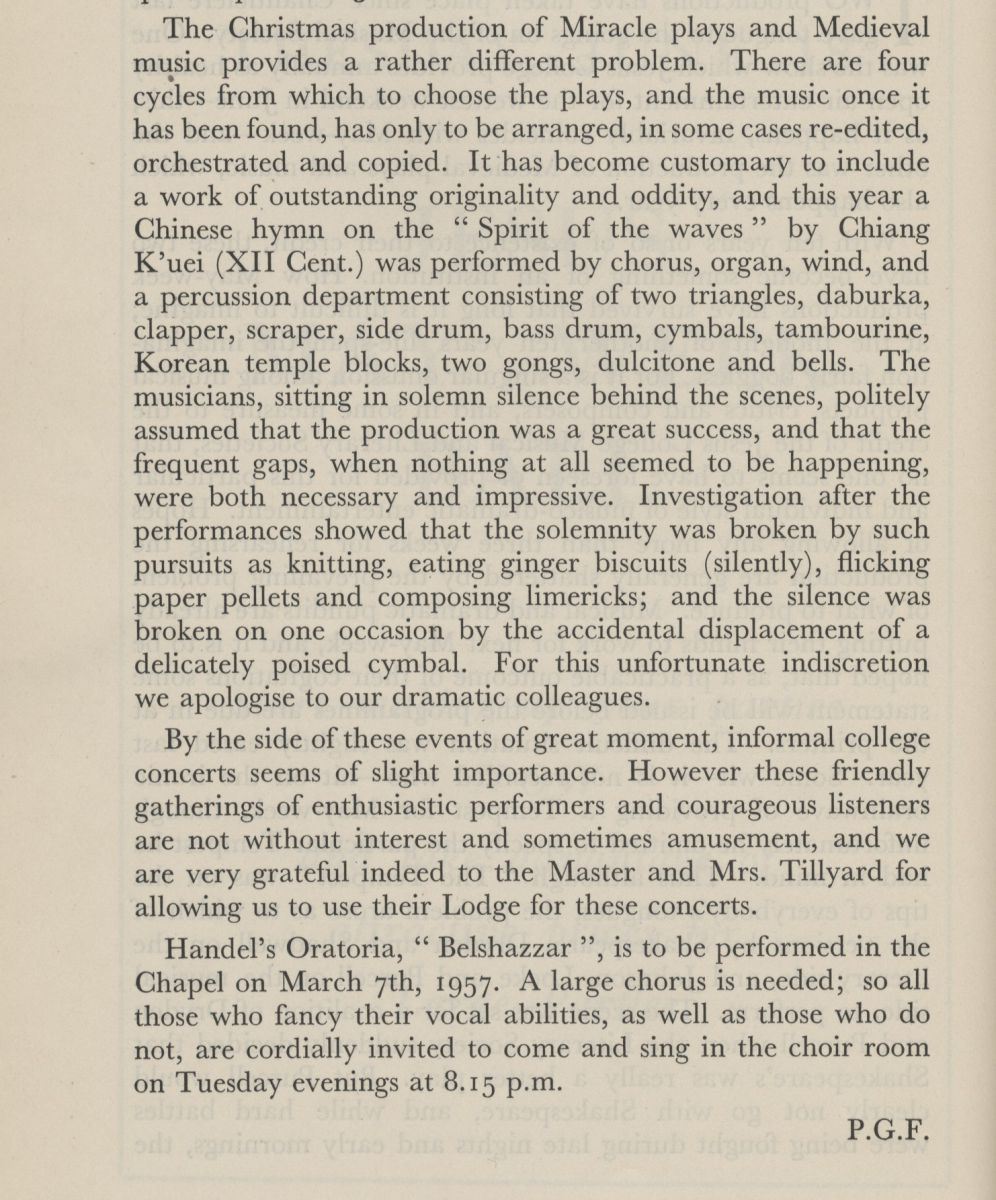 In addition to December, the play was also performed at 8.30pm on two earlier nights on Thursday 29th and Friday 30th November 1956. A positive review of all performances appeared in the College’s Annual Report in 1957.

However, what distinguishes this play above many similar performances, at least from an archival perspective, is the extraordinary collection of surviving documentation in the College Archives relating to this particular performance. Copies of the programmes for each of the three nights have been kept, each listing the characters and titles of music performed survive alongside the advertising poster as seen above. 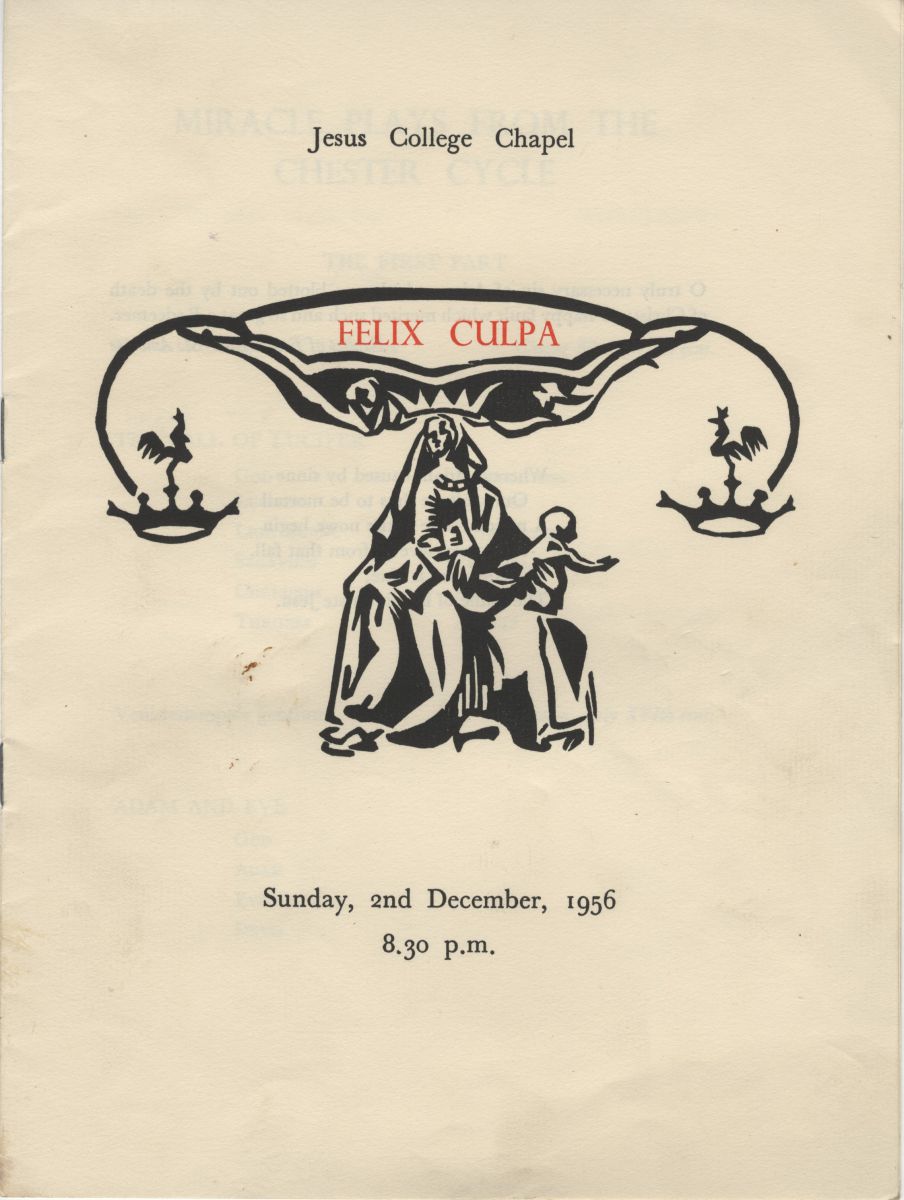 Original annotated versions of the musical scores and scripts are present as are rehearsal programmes in which participants are reminded that “during the dress rehearsal and performances there will be no objection to the gentlemen reading or the ladies doing their knitting!”.

The most striking survival, however, are the designs for the costumes made especially for the production. Although they are not credited in the programmes for Felix Culpa, the designs were by Pat Henderson (a student at Newnham) and Rosemary Hallett, as can be determined by comparing the design style and handwriting used in annotations with the costume designs made by them both for a production of ‘the Tempest’ which took place earlier in 1956. 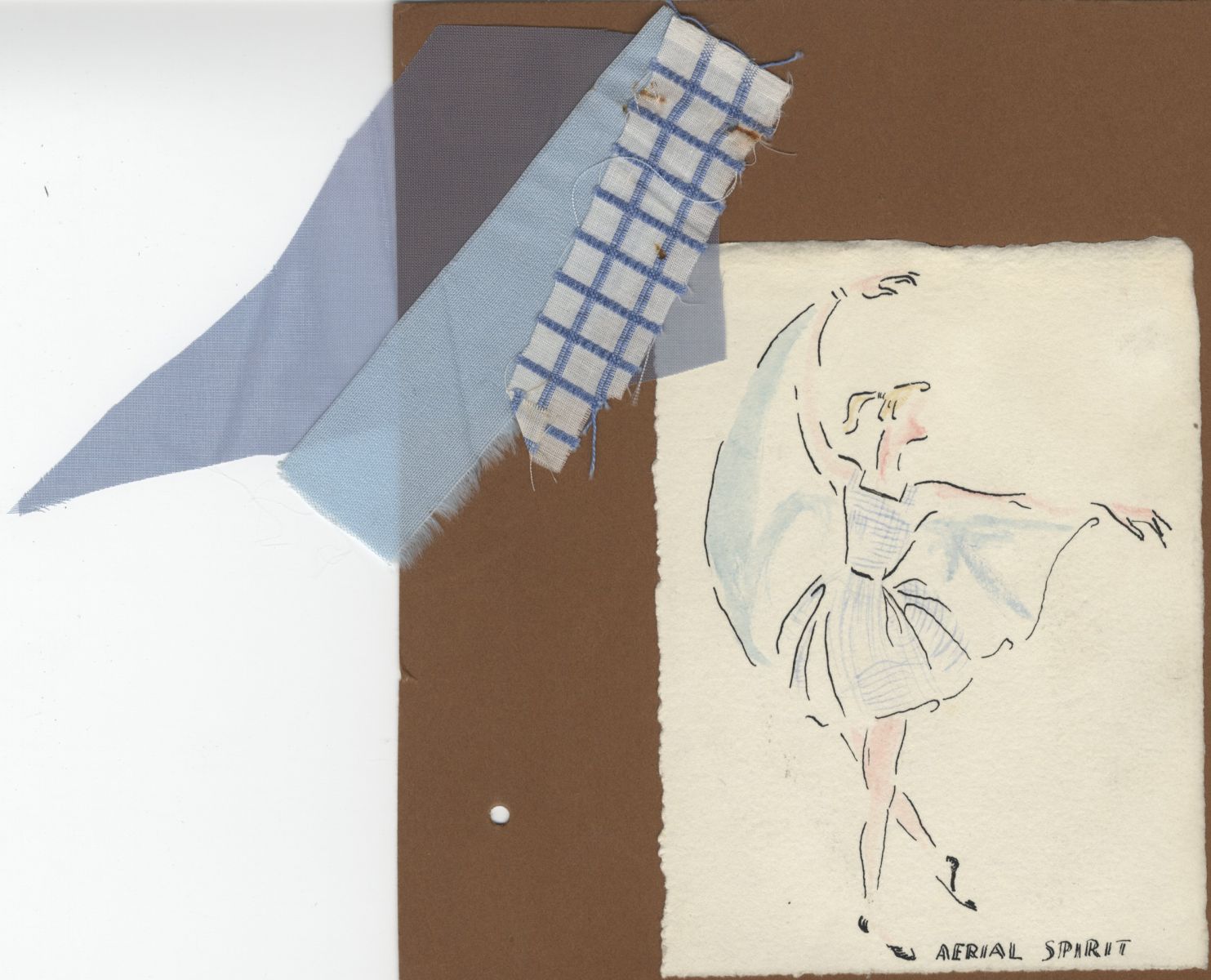 Each design, such as the one shown above for one of the ‘Aerial Spirits’, includes a coloured design mounted on card, a pencil sketch of the same form along with a swatch of fabric samples used to make the costumes, how much fabric was bought and at what cost (occasionally including the original receipt from Robert Sayle’s department store), notes on how to make the costumes including measurements and suggestions for sewing techniques and patterns. Names of individuals playing the parts are also provided and in some case so are their specific body measurements if required for making the costumes. Included below are scans of all these costume designs, all of which do indeed appear to have been made for the play.

What truly makes this collection complete, however, is the survival of four photographs taken showing the players in costume and on the temporary stage erected in the Chapel for the performances. As can be seen, the costume designs appear to have been executed almost exactly and to great effect. 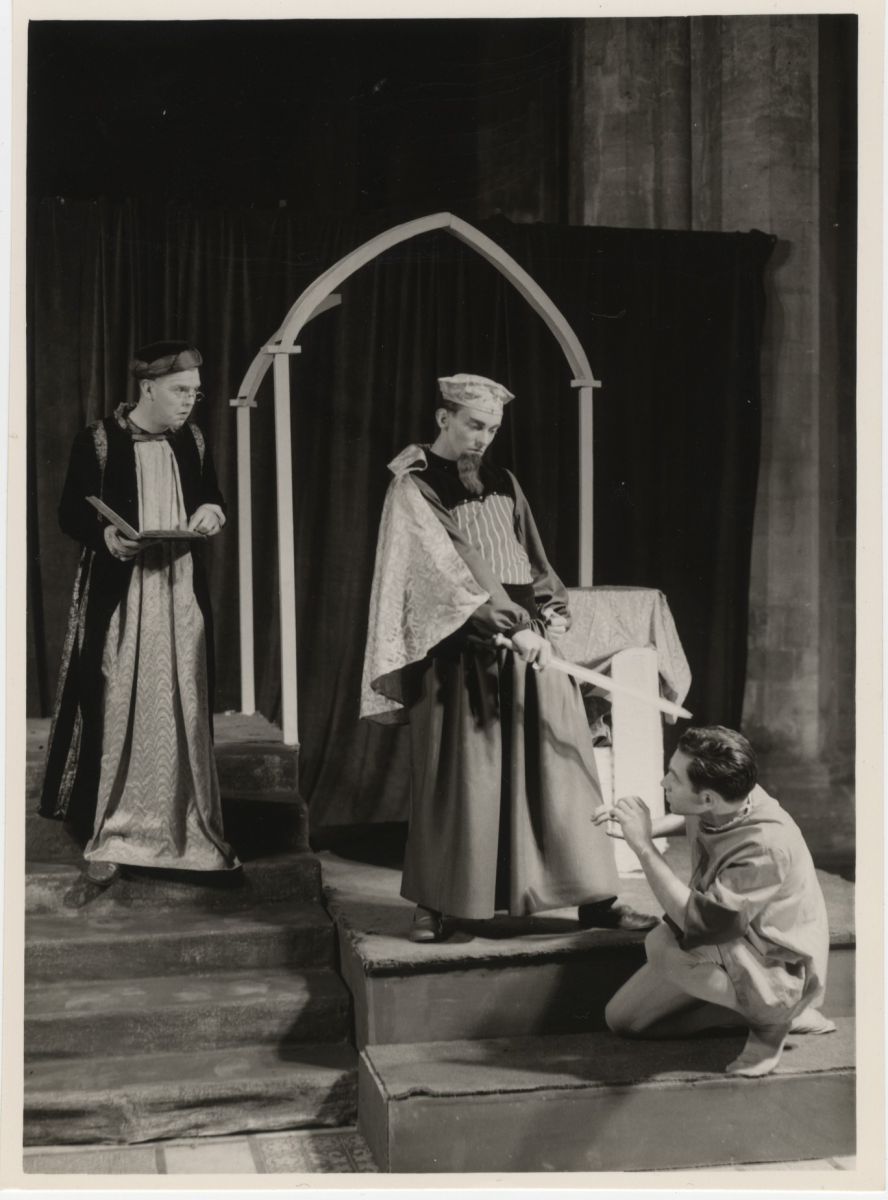 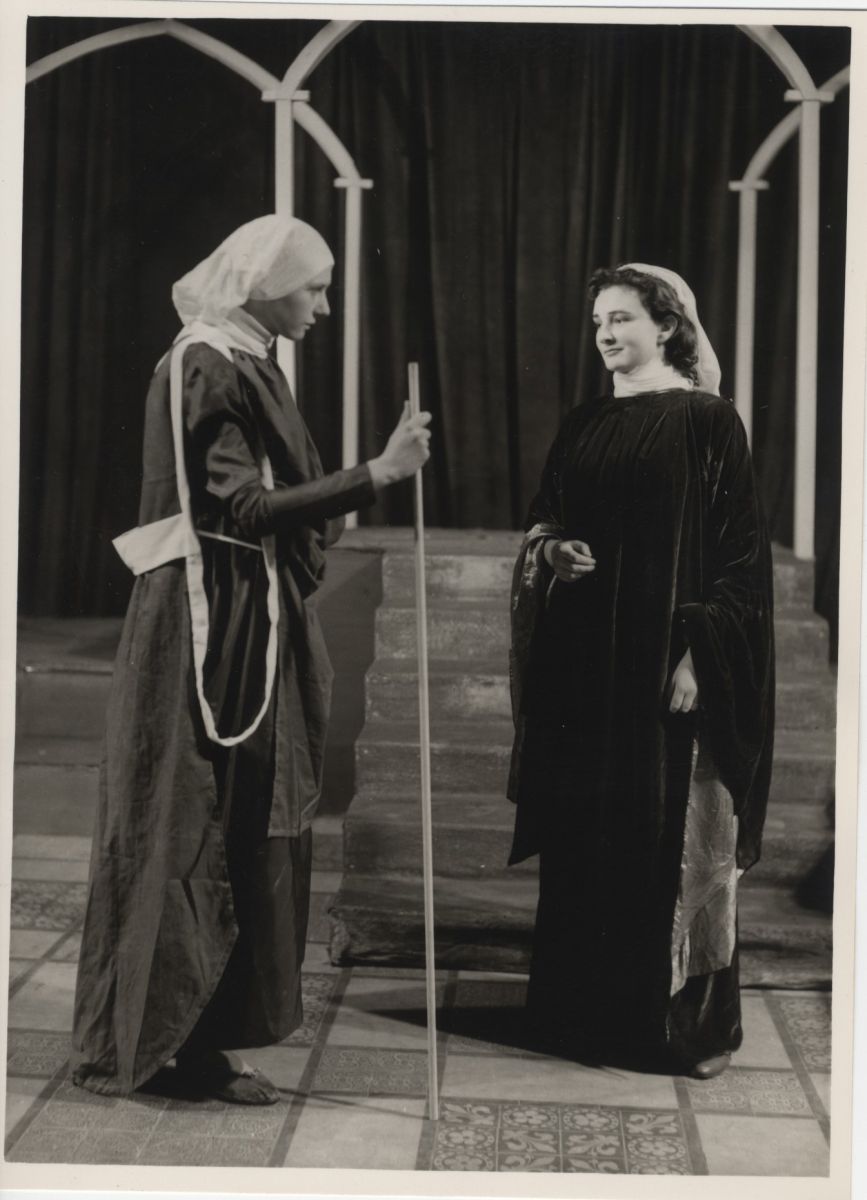 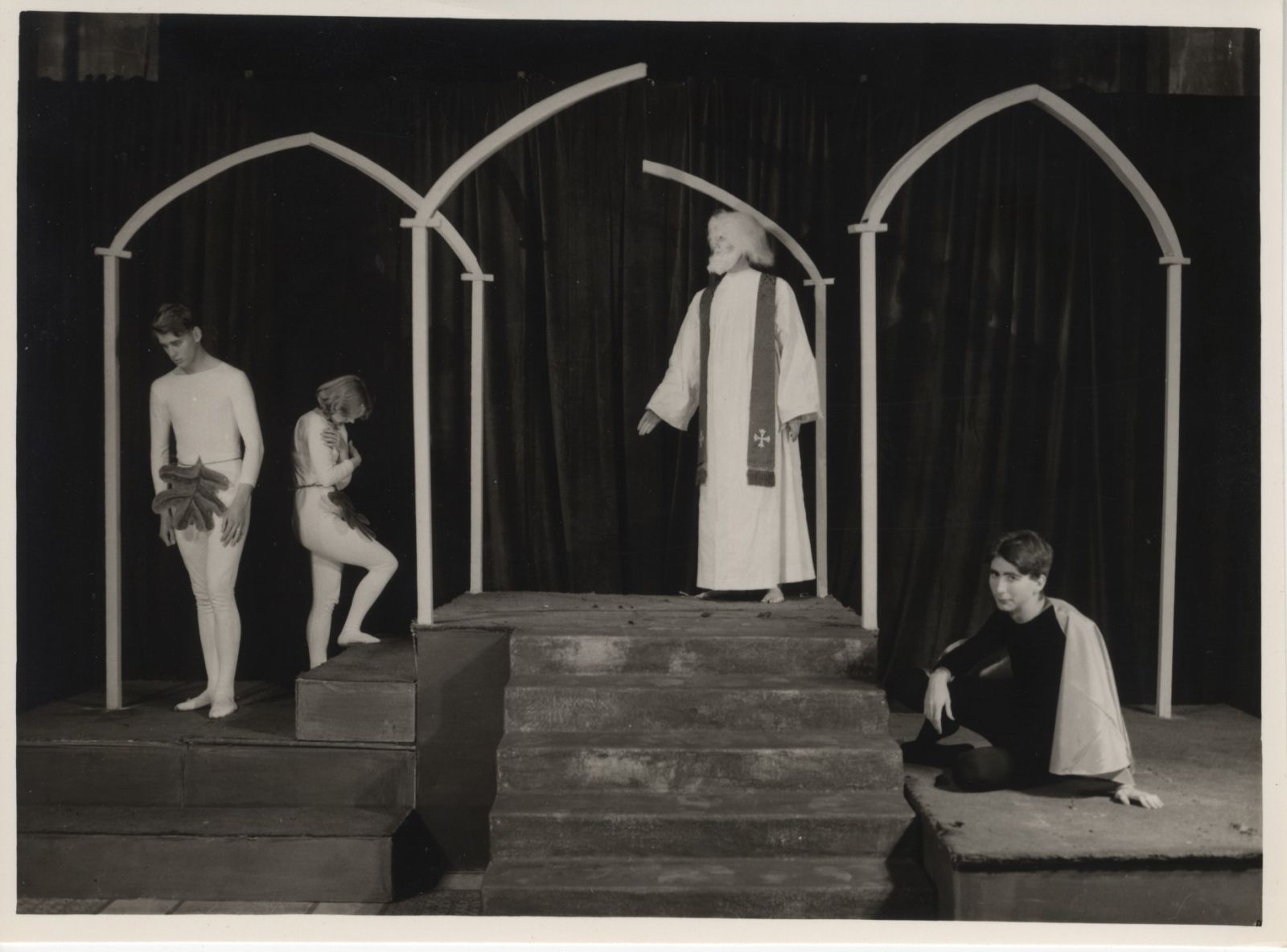 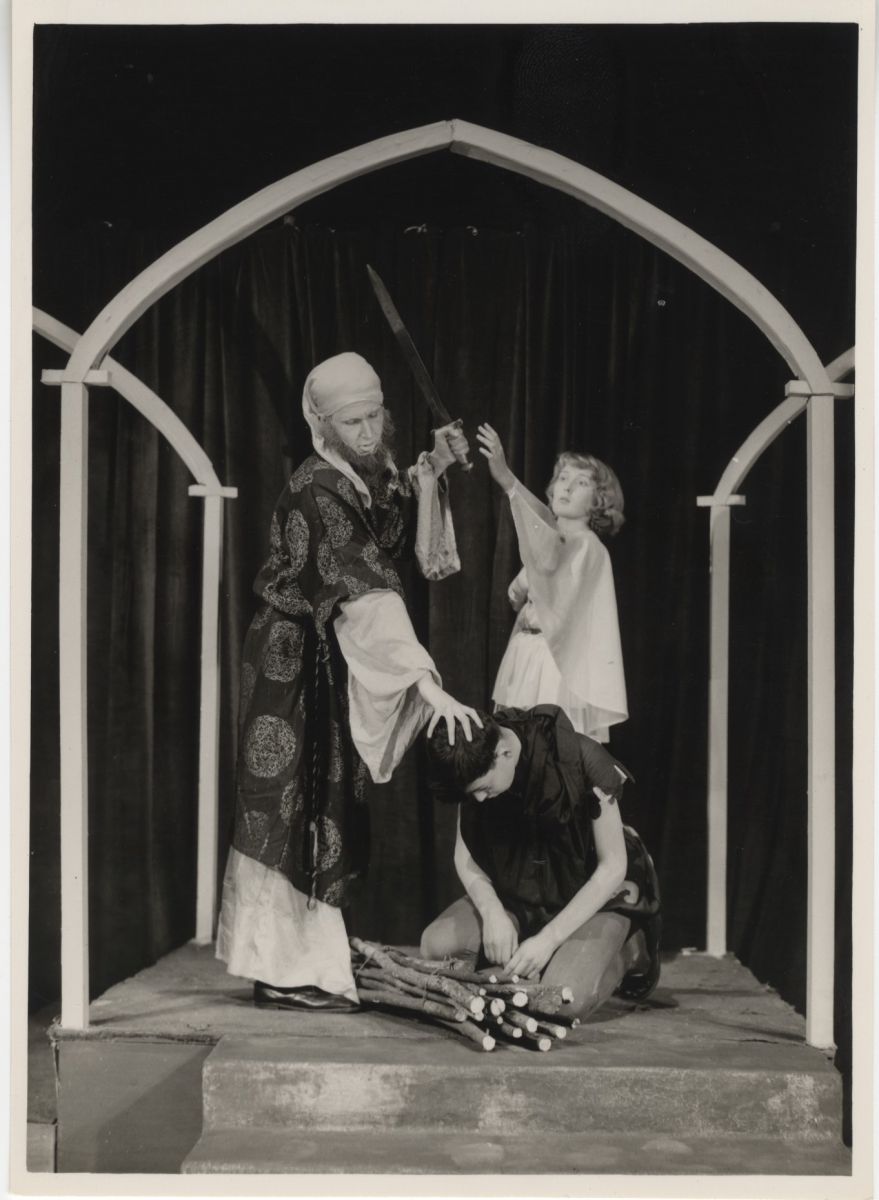 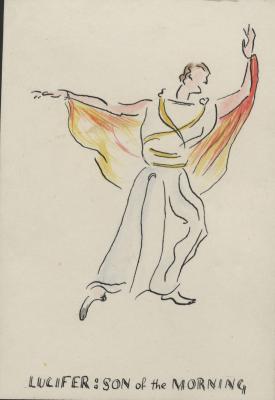 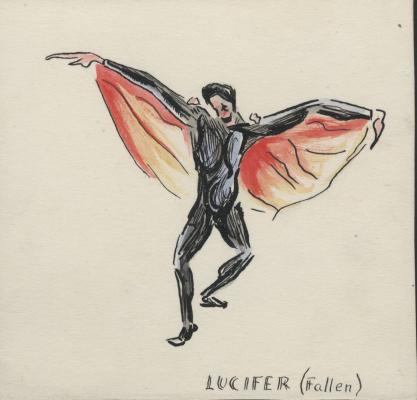 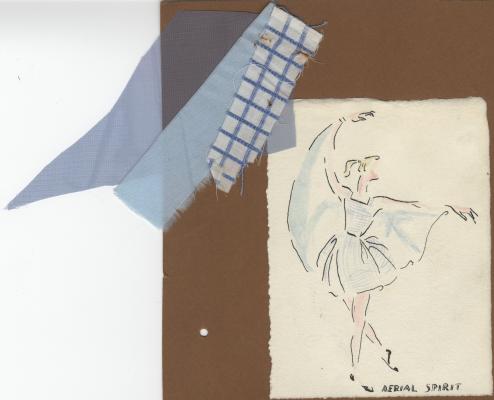 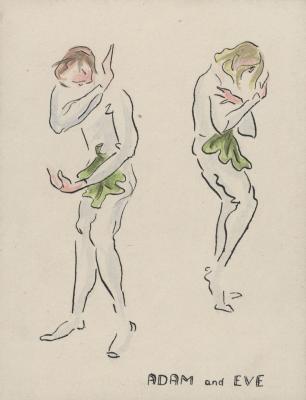 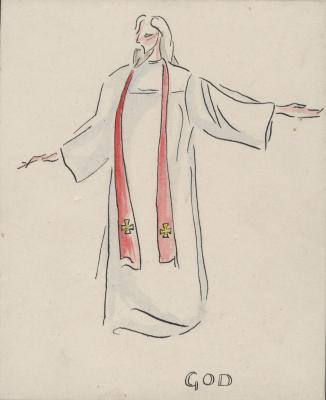 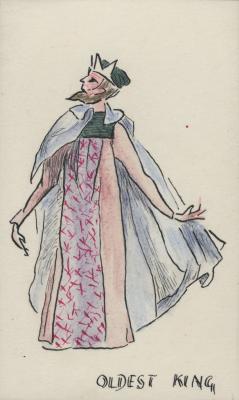 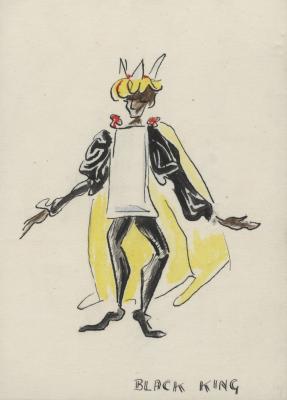 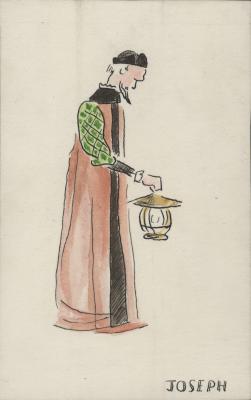 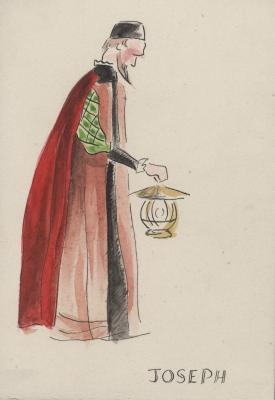 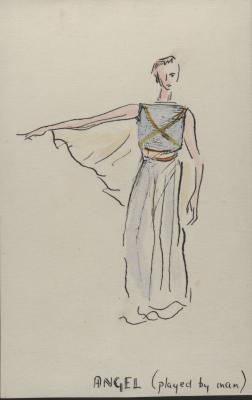 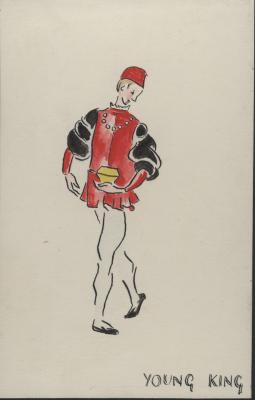 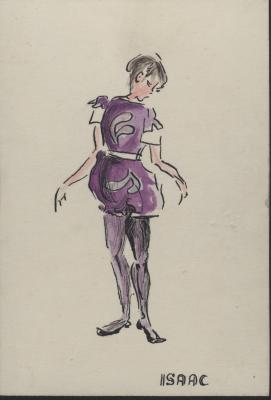 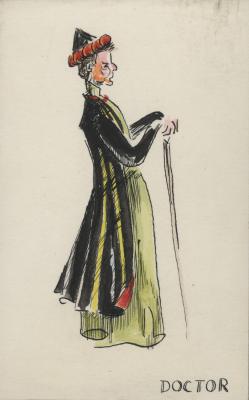 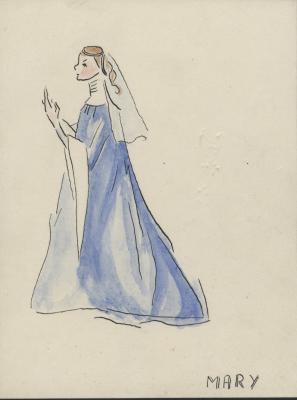 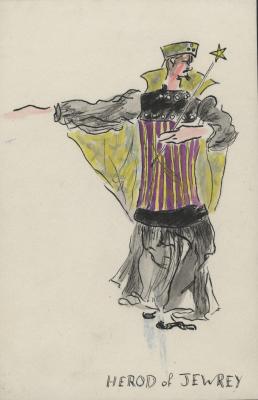 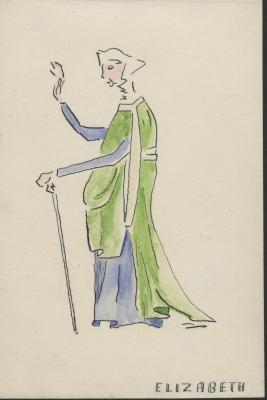 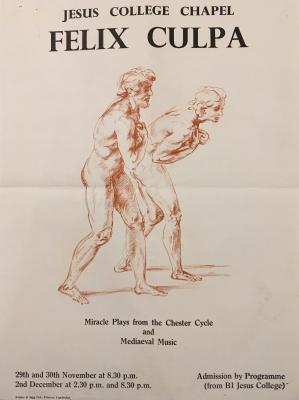