Archive of the month: College crests

In recent weeks, the observant among you might have noticed that some of the coats of arms and crests carved into the stonework in Cloister Court and in Boaty Arch in the Carpenter Building have recently been repainted.

The question now being asked is ‘whose crests were these and how are they connected to the College?’ and, as such, it seems timely to answer this. The most common symbol to appear in the crests, as might be expected for Jesus College, is the cockerel. It appears in four of the recently repainted crests as shown. 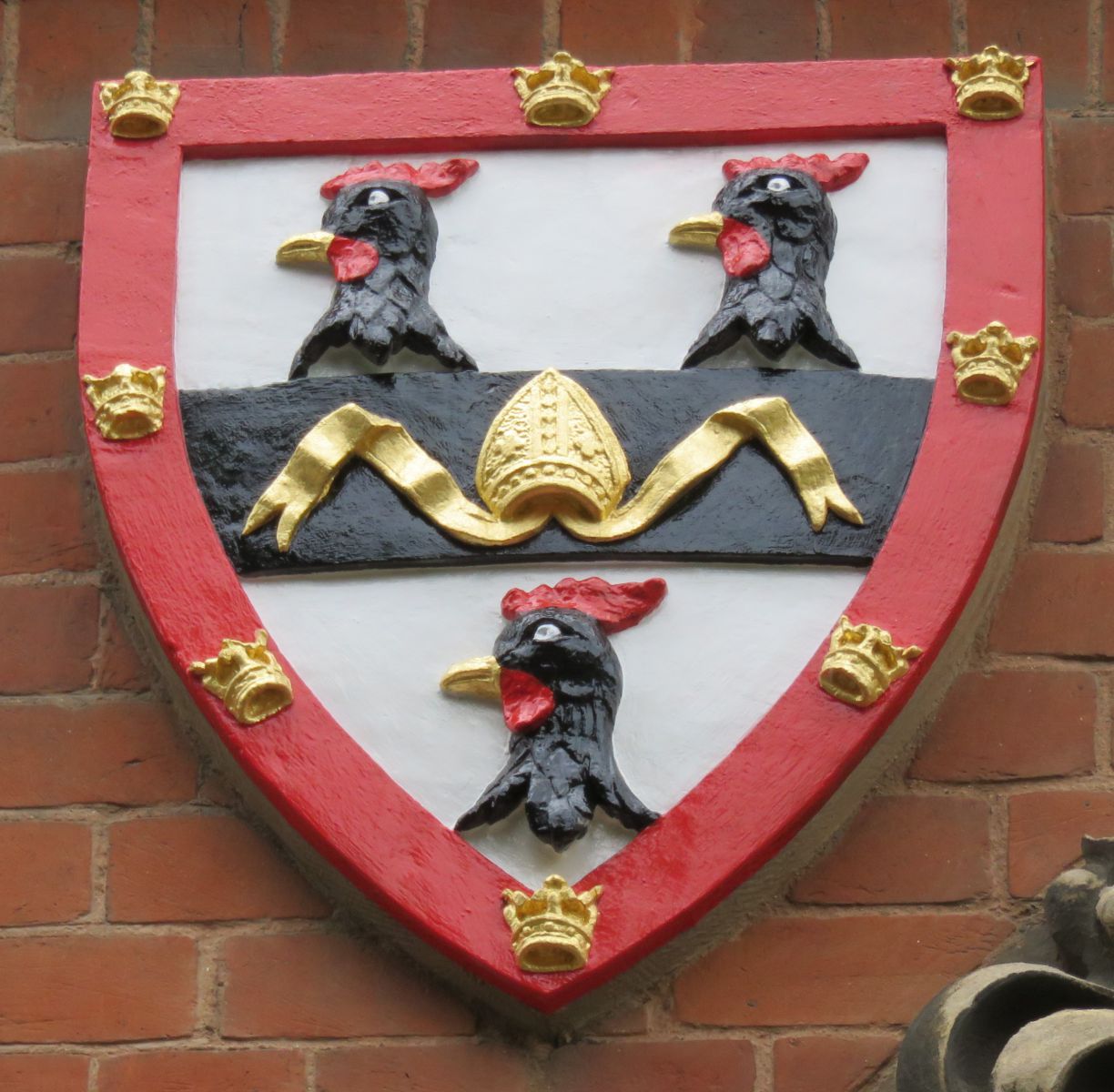 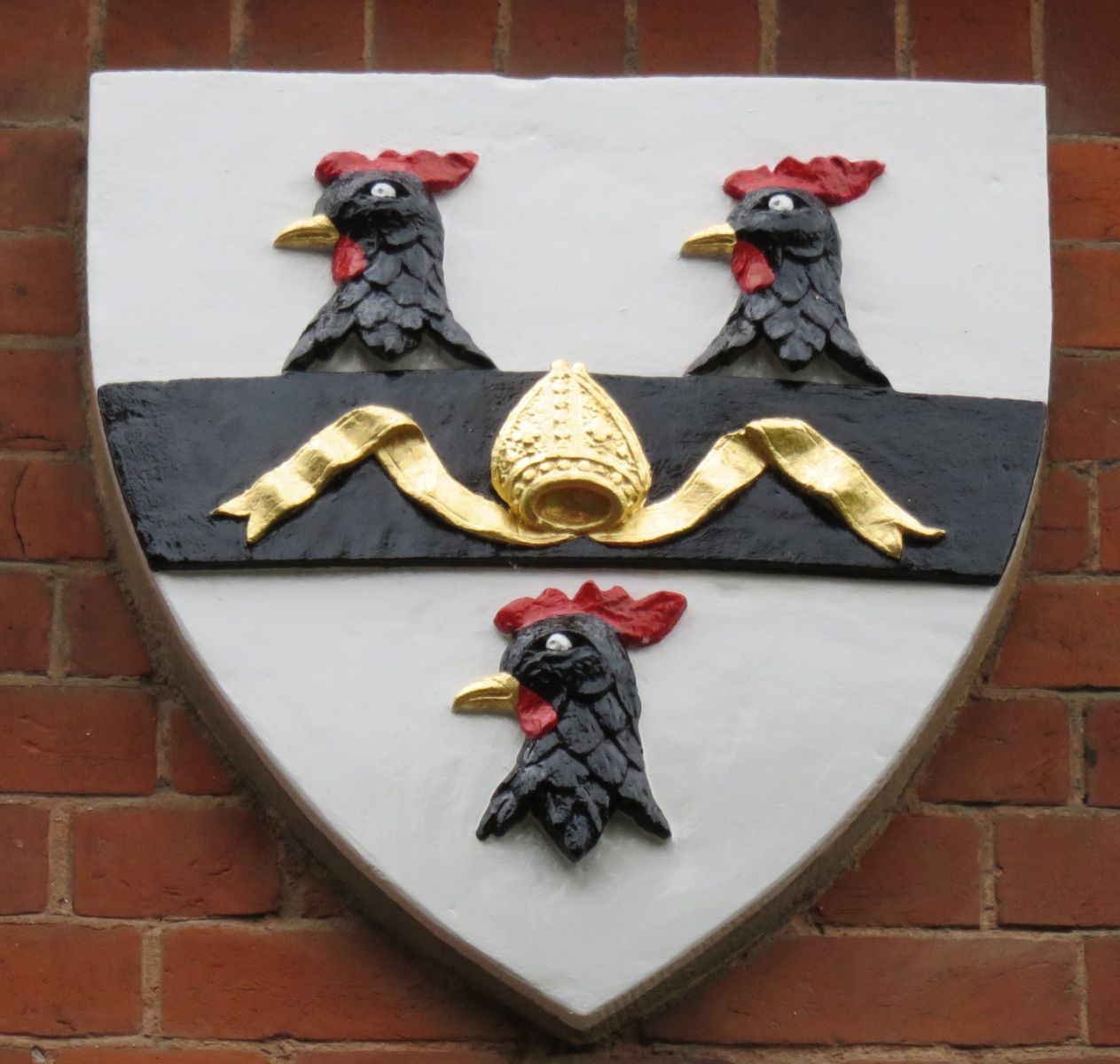 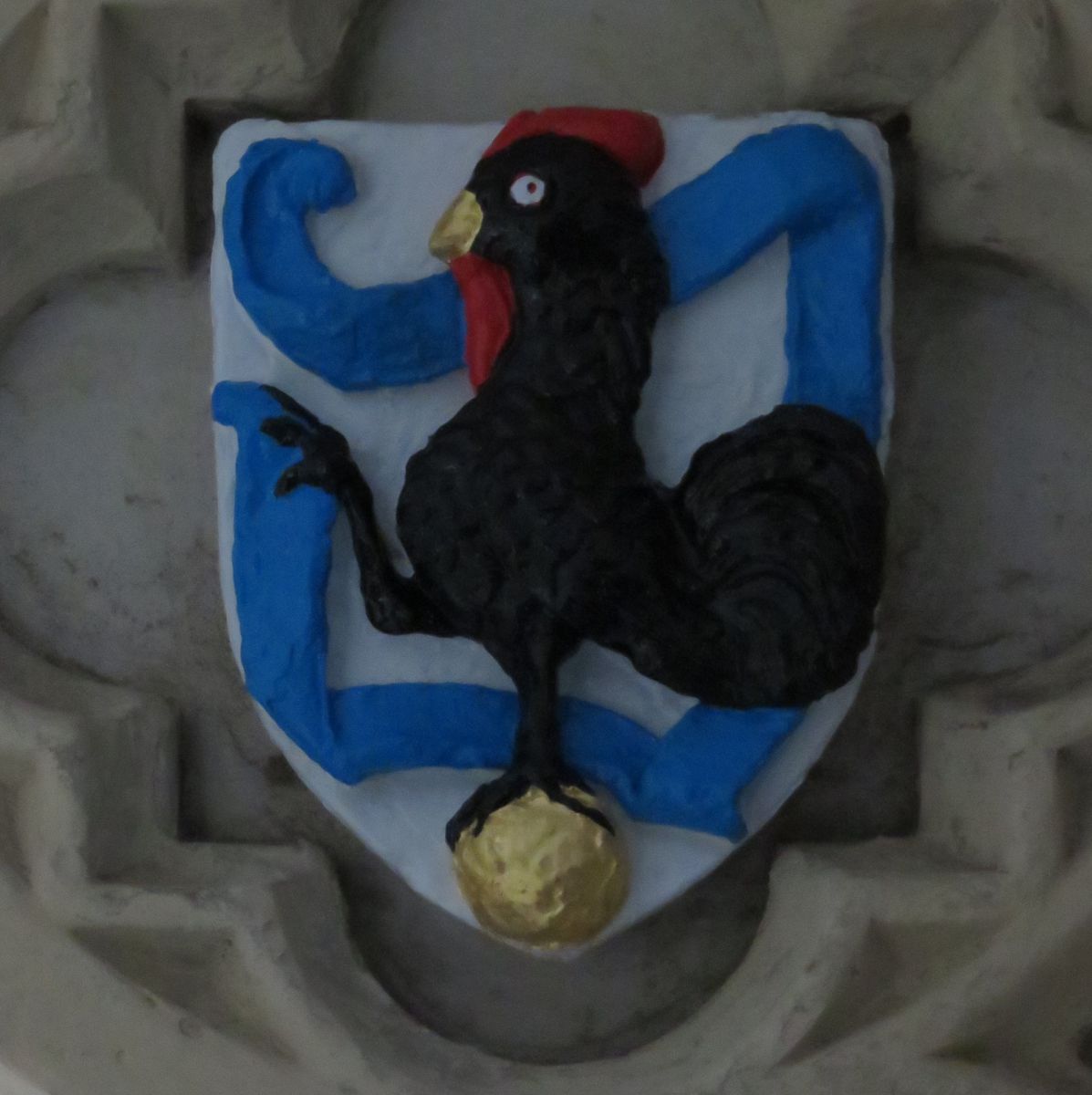 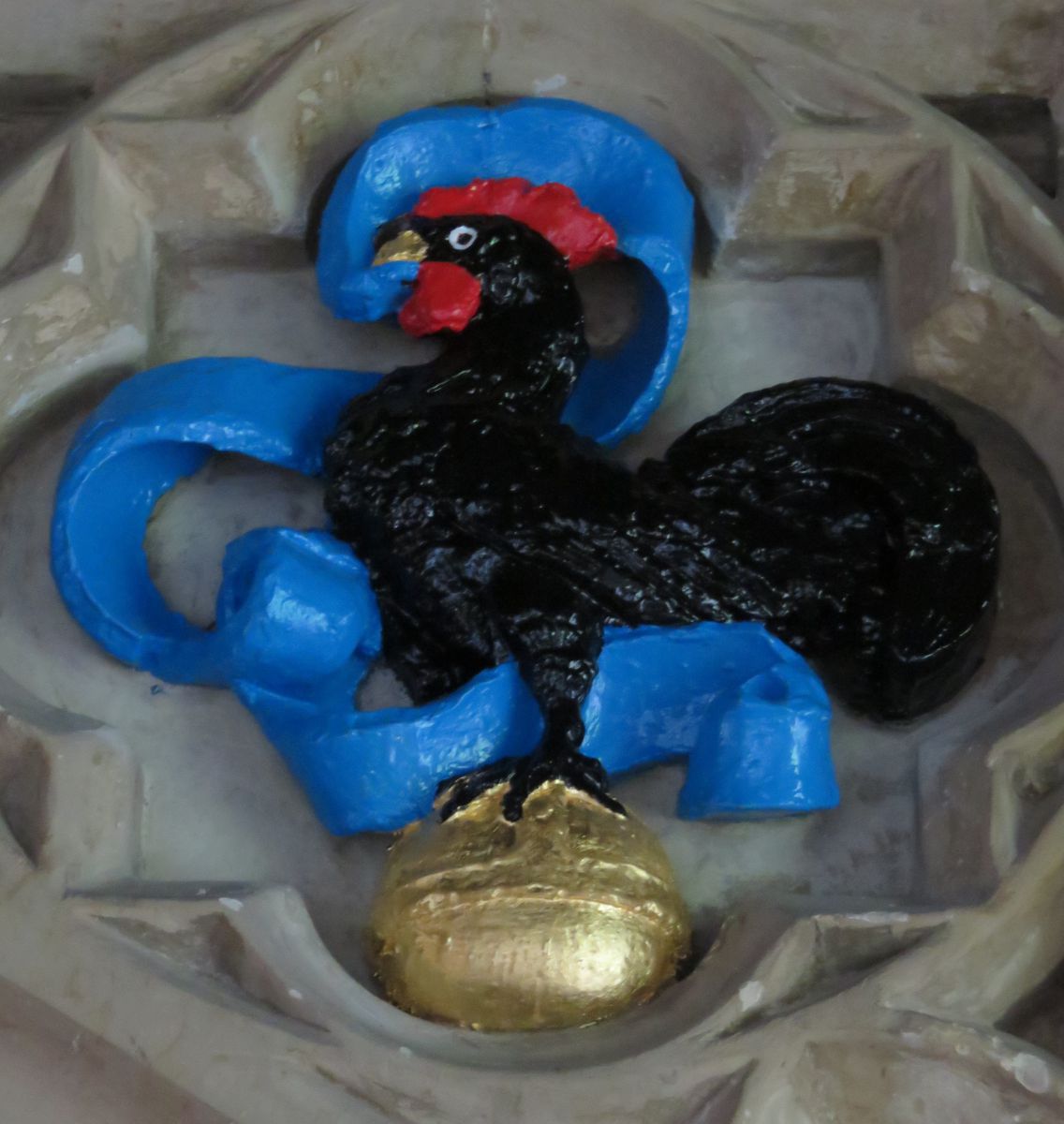 The cockerel symbol was taken from the family crest of Bishop John Alcock (the College founder), and is a play on the surname. Indeed the crest showing the three cockerels with the bishops mitre running through the centre of the crest is Alcock’s personal coat of arms, the insertion of the mitre distinguishing his own crest from that generally used by other members of his family. The mitre represented his position as Bishop of Ely (during which time he founded the College) and, previously, Bishop of both Worcester and Rochester. Furthermore, when that crest was adapted by the College as its own, the border of red with episcopal coronets was added to further acknowledge Alcock’s position of Bishop of Ely and his role in founding the College. The red border in the coat of arms comes from that of the See of Ely - three coronets on a red background. These arms appear to have been first used in 1290 by Bishop William de Luda and are attributed to Saint Etheldreda, Queen of Northumbria and foundress of the Abbey of Ely. A copy of the See of Ely's coat of arms was also included in the recent repainting. 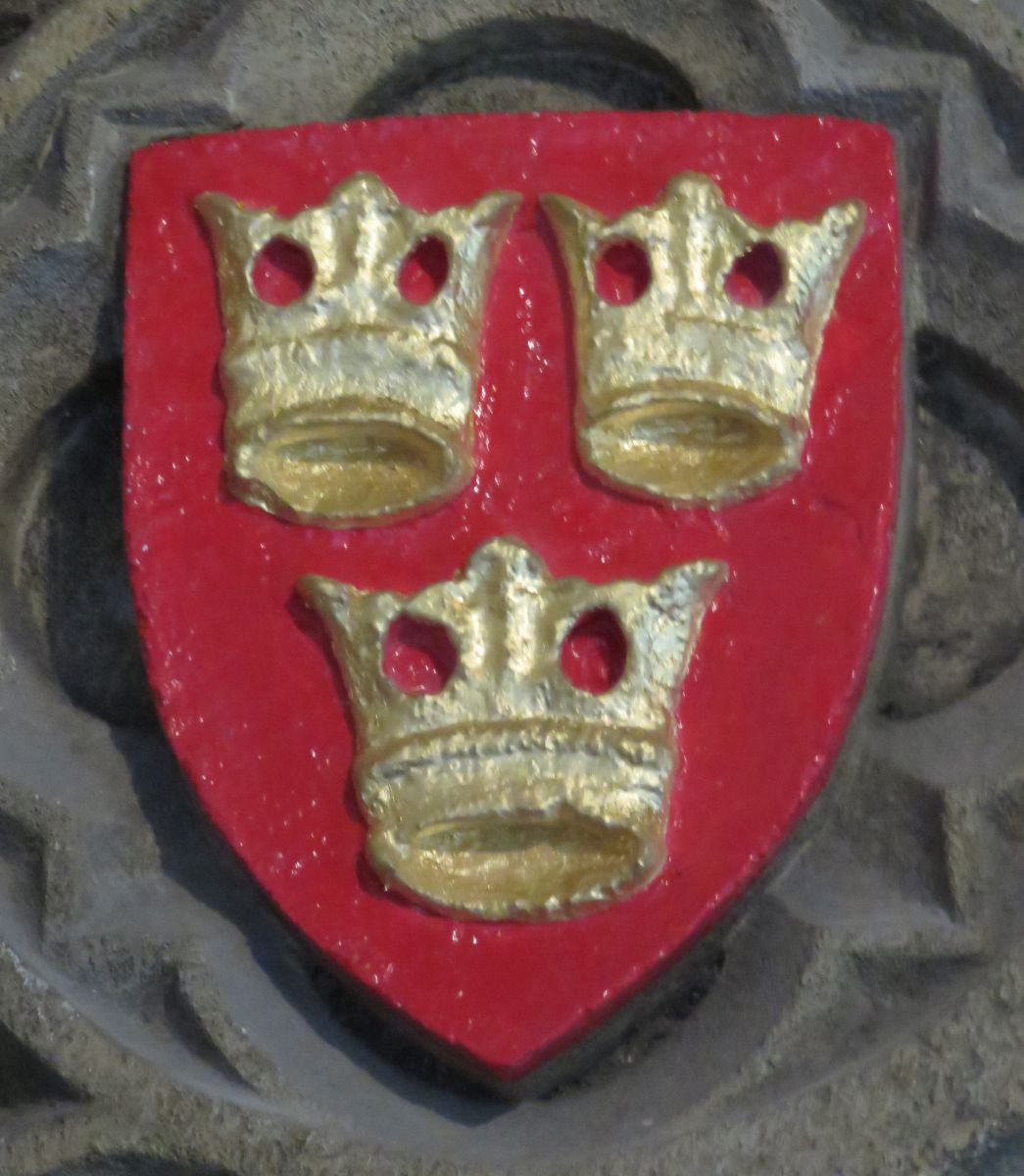 This new College coat of arms was awarded by Robert Cooke, the Clarenceaux King of Arms, at the College of Arms in 1575. It replaced the College’s original, the Five Wounds of Jesus, which, following the symbol’s appearance on rebel banners in 1536 (the Pilgrimage of Grace), 1549 (Western Rising) and 1569 (the Rebellion of the Northern Earls), came to be seen as somewhat inappropriate for continued College use. 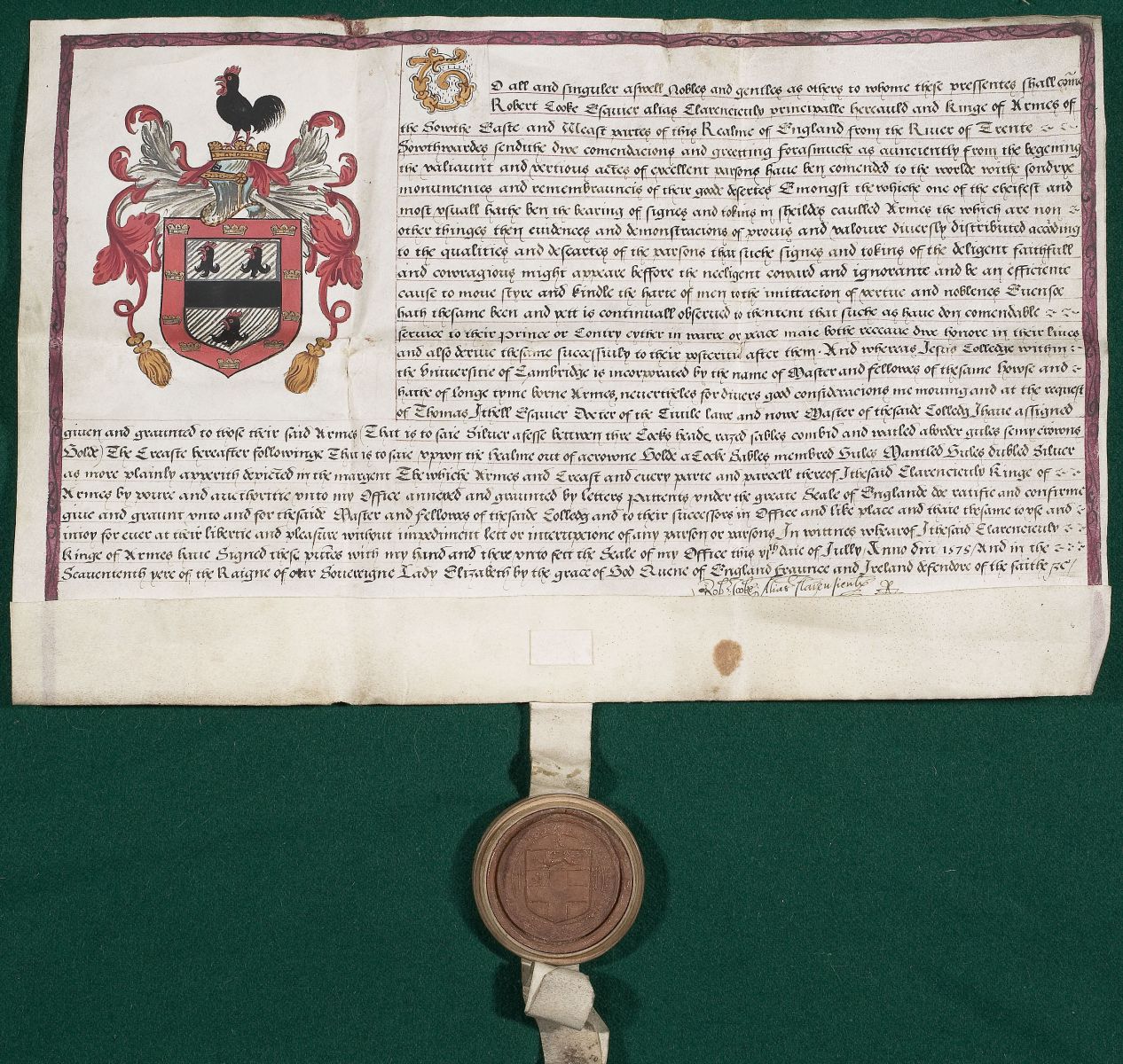 Two of the repainted crests show the eagle of St. John and possibly represent an acknowledgement of Bishop Alcock’s name saint or perhaps reference to the inclusion of St. John the Evangelist in the official full name of the College. 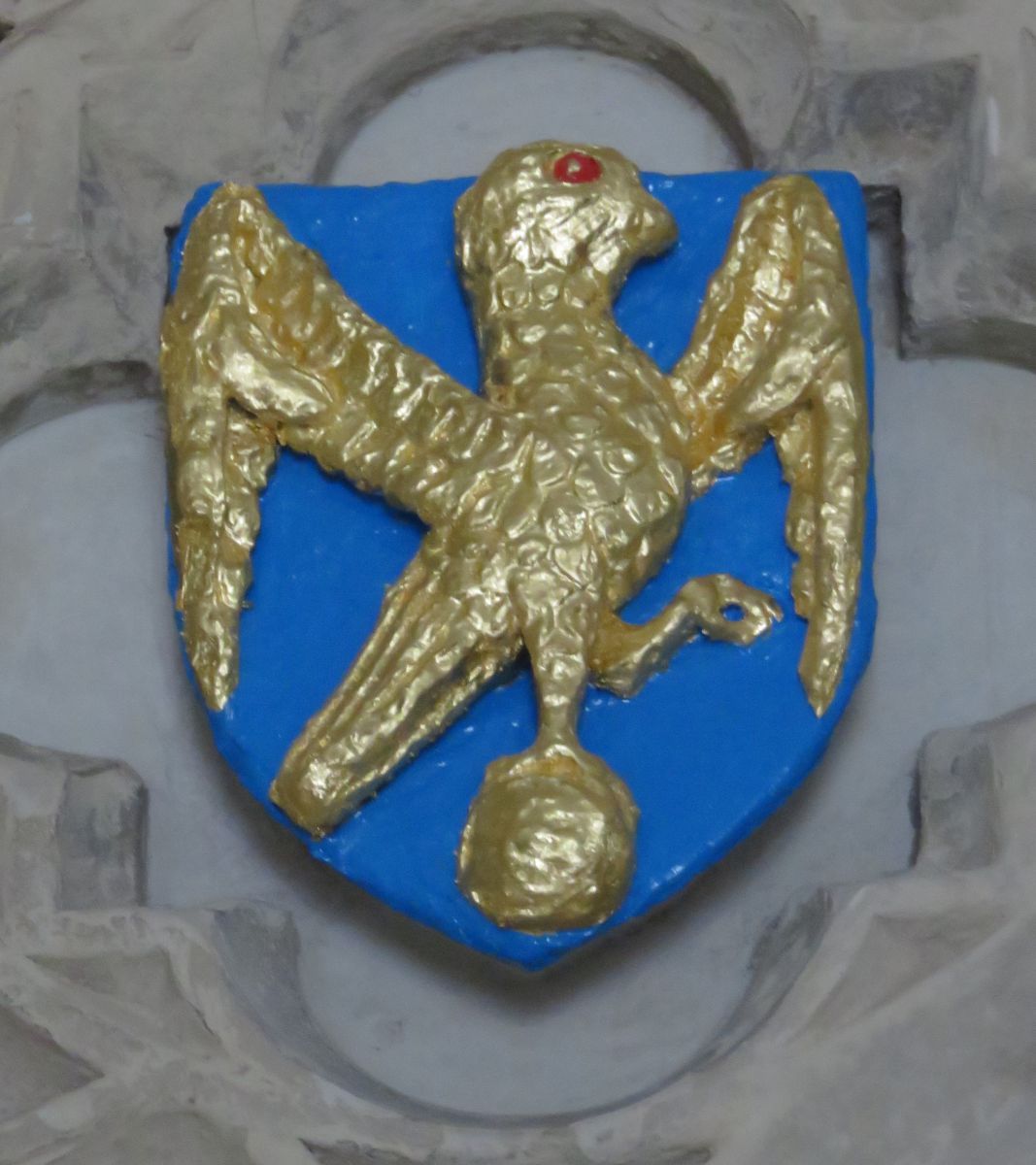 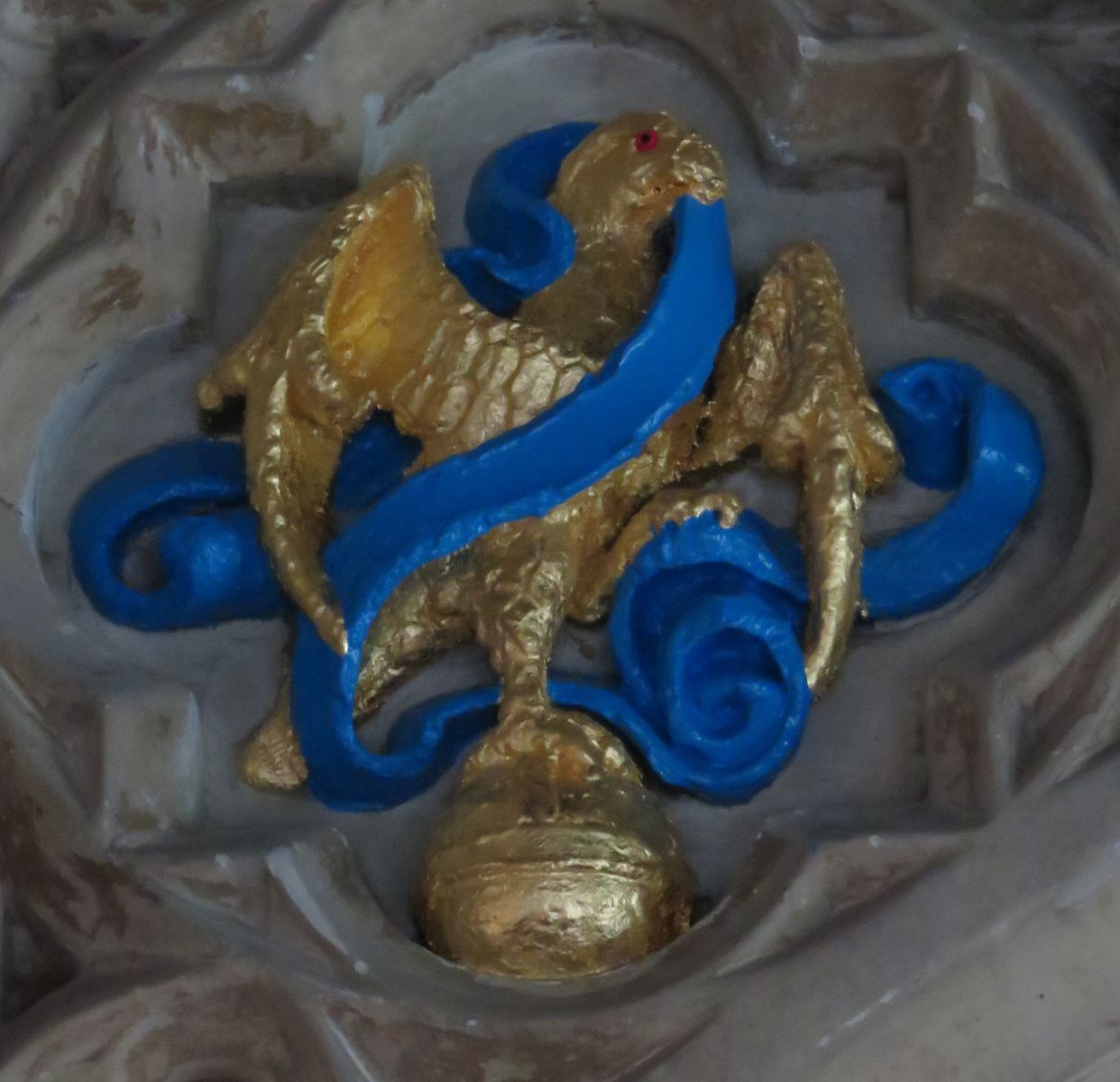 Moving away from the arms of the founder and onto those of benefactors, coats of arms representing the Royal Arms of Scotland can be found in the form of the lion rampant. This is an acknowledgement of the benefaction presented to the Priory of St. Radegund by Malcolm IV of Scotland. 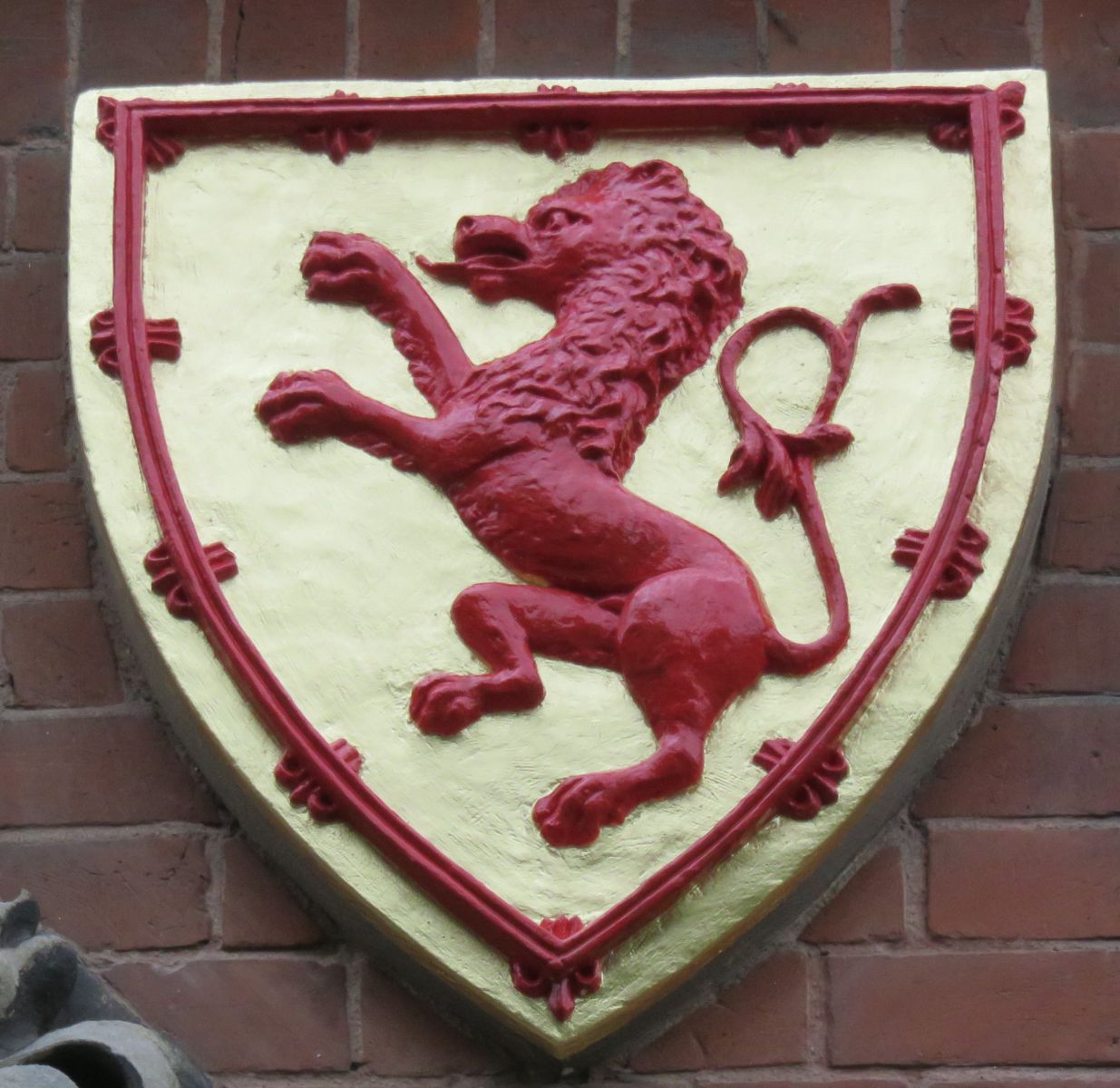 The most difficult crest to which a connection can be fully established is the image of the fleur-de-lis, a symbol of the kingdom of France. Although this makes up part of the coats of arms of Henry VII, who was King at the time of the foundation of the College, it has also been suggested that the symbol could be a nod to St. Radegund’s role as ‘Queen of the Franks’ during her time as consort to Chlothar I, a King of the Franks. 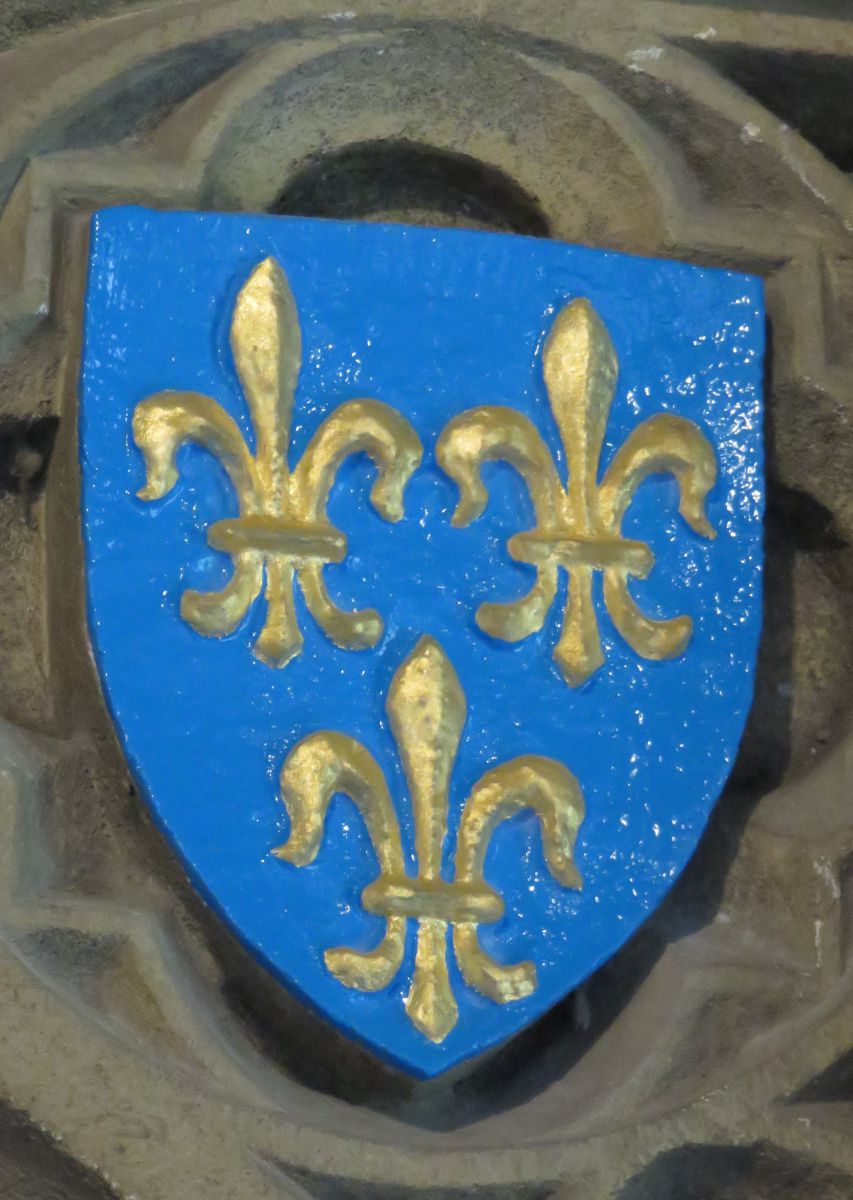 Perhaps the most striking repainted emblem is that of the bishops mitre which appears between one set of the eagle and cockerel standing on orbs. Collectively, they can be found above a back entrance in to the College kitchens from Cloister Court.

This does seem like a rather elaborate decoration to have over a relatively underused kitchen entrance, however it was originally the entrance to Hall.

The original staircase went straight up to the Hall from this entrance door, but on the extension of the Hall and construction of ‘Small Hall’ in 1875 a new staircase was created. In turn, this staircase was removed following the demolition of ‘Small Hall’ in 1962 when the current staircase was also inserted. The first floor Hall entrance to the 1875 staircase came out where the window on the landing between Hall and the entrance to caff is now located. This extract from a plan of the College site from Willis and Clark’s Architectural History of the University of Cambridge (1886) illustrates the location of the stair case and ‘Small Hall’ (identified on the plan as the ‘servants’ hall’). 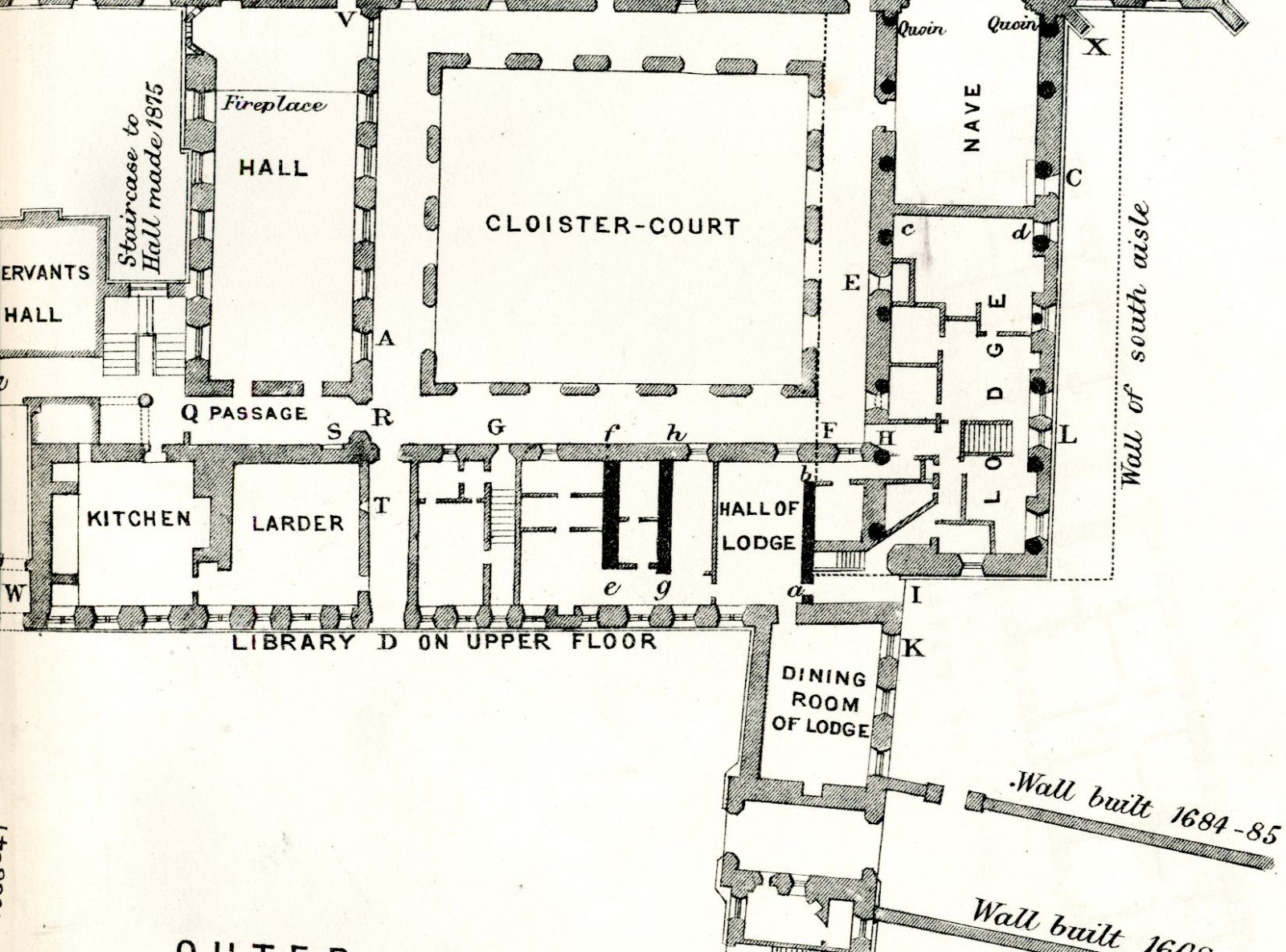