Archive of the month: Christmas and Bacchides

Christmas in College is a popular time of year, with numerous events happening in Chapel and various parties, lunches and dinners taking place in the Hall.

Delving back into the College records proves that Christmas was celebrated in similar ways as far back as the 16th century. The account books show that the College hosted various types of entertainment in the second half of the 16th century including musical performances and plays. The earliest recorded Christmas performance in the College was in 1564, the next not being performed until the late 1570s when two Christmas plays were performed in quick succession: an unnamed comedy played in Hall on Christmas Day 1577 and another being played, possibly on Christmas Eve, in 1579. There are other records referring to plays performed in the Hall and Chapel between 1564 and 1579, although none are specifically linked to Christmas. However, the play for 1579 is unusual in that, through the College accounts, both the name of the play and that of the producer is recorded. The play performed in 1579 was Bacchides, a play by the Roman playwright Titus Maccius Plautus. The plot revolves around two friends, Mnesilochus and Pistoclerus, who fall in love with two sisters, both of whom are called Bacchis and are employed at the local brothel. Classic themes abound, such as mistaken identity, confusion of individuals and payments made to the wrong people. This entry shows the extract from the College accounts at the time and reads 'It[e]m to Mr Wilsha on Christenmas eaven for ye charges of the Co[m]medye Bacchides   xxxix s i d'. The  payment made is in old money and reads 39 shillings and 1 pence.

Compared to the anonymous 'comoedie' performed in the Hall in 1577 which cost 23 shillings and 2 pence, Bacchides was clearly a more expensive production. The payment for the 1577 play is described as being "delivered to Mr Wilshawe ye vth Ianurie towardes the Stage & other charges of the Comoedie pleyed publiklie in the Hawlle in this Christmas" which possibly gives an indication that payments had to be made to create or enhance the dais end of the Hall in order to create a specific stage for the performance. Further reading shows that all performances of plays by Plautus required what were called 'stage houses' or elaborate set pieces that served as house fronts or balconies for the play and provided the principal means of entry and exit to the stage by actors. Sometimes the upper levels of these 'stage houses' were used as city walls or balconies and it is not difficult to imagine 'stage houses' being erected in the Hall to serve as the entrance to the brothel in which the two Bacchis' reside. This need for more elaborate set pieces for plays by Plautus might possibly explain the added expense for the production of Bacchides.

Although, unfortunately, we do not know who acted in the play, at the time the actors would likely have been current students, recent graduates and fellows. This assumption is based on the few cast lists that survive for plays performed in other Cambridge colleges during the same period which list college members as being the actors. We are also extremely lucky in that there are two volumes of the works of Plautus in the Old Library, both of which contain copies of Bacchides, one from 1510 and the other from 1578. Below is the title page of the play from the 1578 volume (so contemporary to the performance of 1579) which, before being given to the College in the 18th century, was owned by Joseph Stillington, who matriculated in 1686 and was a Fellow until his death in 1707. There is only one other instance of a named performance of Bacchides taking place in Cambridge which was performed at Trinity in 1563. 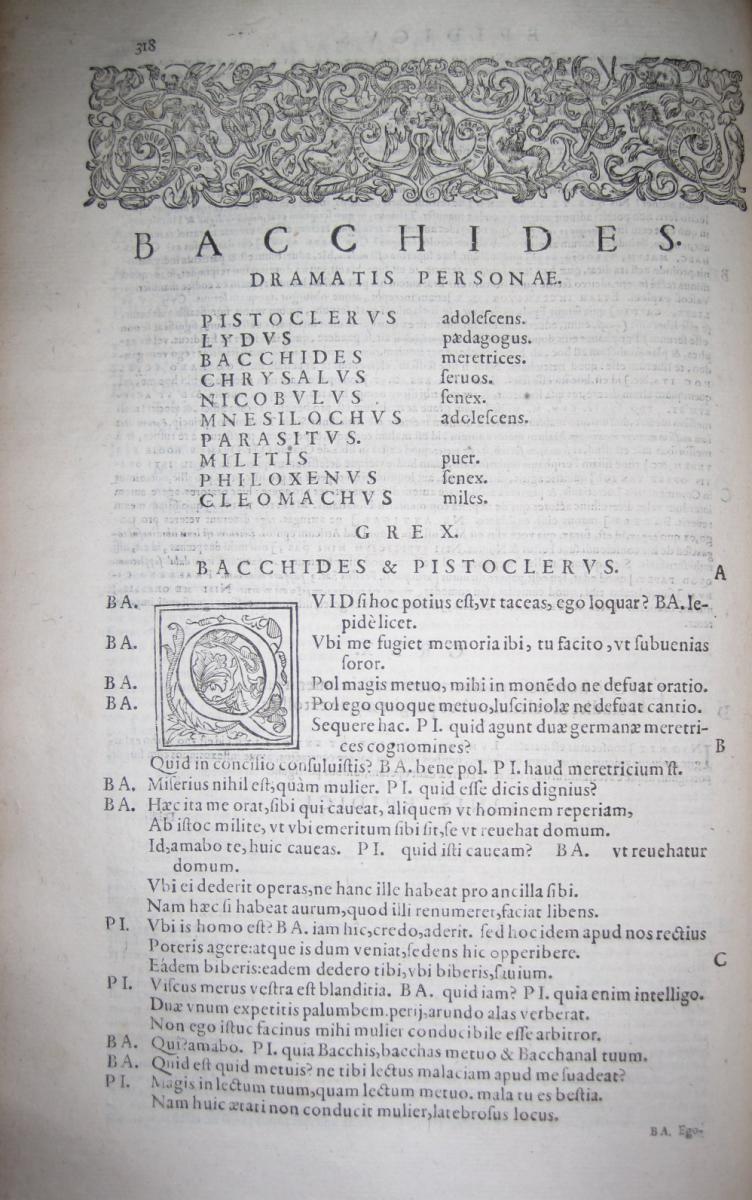 As to the 'producer' of the play, Thomas Wilsha (or Wilshaw) was admitted to Jesus in 1569 aged 15 (not uncommon for the period), receiving a BA in 1572 and an MA in 1576. In 1573, aged 19, he became a Fellow of the College and remained so until 1585, meaning at the time of the performance of the play he was roughly half way through his Fellowship and about 25 when taking on the role of producer. Unfortunately there are very few records in the Archives at the time Thomas was a member of the College, so we have very little further detailed information about him other than that which survives in the College accounts. There are, however, copies of Thomas' signature in the old 'treasury books'. One of Thomas' responsibilities in College was to approve the removal and verify the receipt of items or money to the College treasury (a secure area containing the College plate and money) by signing the 'treasury book'. His signatures appear in the book between 1579 and 1582, so maybe by the time the play was performed his ability to assist with the management of the College finances put him in a good position to manage those of the College play. This image shows his signature from the 'treasury book' from 3rd July 1579. 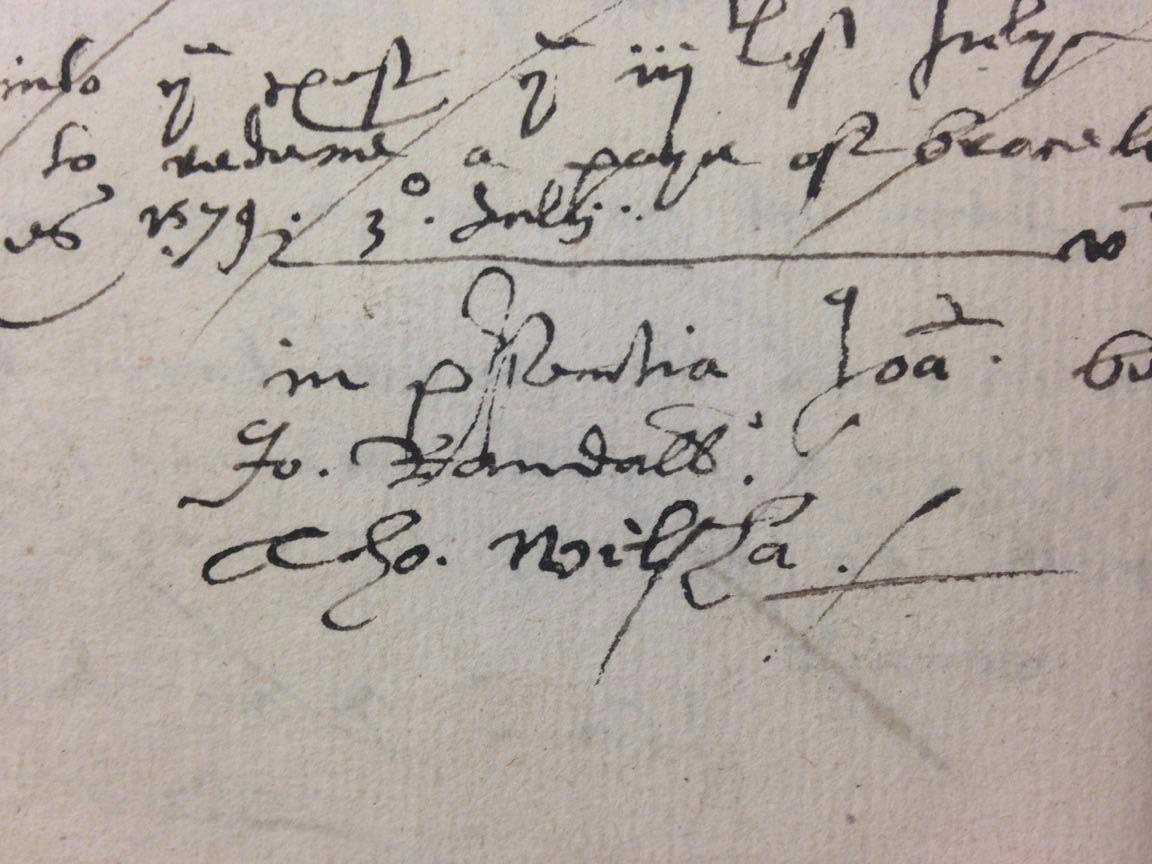 Following his time in Cambridge, Thomas moved to Sussex, later succeeding his father Henry to become the rector of Westbourne parish church. Henry himself was a fellow of Queens, Peterhouse and one of the original fellows of Trinity, being a fellow at Queens and Trinity during periods where numerous plays were performed at both colleges. It is easy to imagine that Thomas, having grown up with a father who had been a member of Colleges with a strong history of producing plays, would have been inspired from a young age to get involved with theatre in a College environment. Thomas was buried at Westbourne on 20 March 1614, following a 23 year tenure as rector of the parish.